Ah yes, because there needed to be more Pokemon products. Still, is it any good? I've got a couple of friends who'd probably be interested in a Pokemon Role Play game.


I'm still reserving judgment on this one! I'll keep you updated, though. For those who want to follow along or take their own peek, the most current PDFs can be found here .

"United" here is a joke. Probably intentionally. PTU is a spinoff of Pokemon Tabletop Adventures, which I've looked at before . I don't know the internal politics here and won't claim to speak for the people involved, but apparently some of the PTA people recognized some of PTA's fundamental flaws and decided to take another stab at it, essentially forking the project.

In theory, they've at least addressed most of the glaring conceptual flaws of PTA, but we'll see how well they play out in practice. Like PTA, PTU is a massive undertaking with more wordcount than many systems I've paid money for, so there's a lot of parts to consider here.

I'm not entirely sure why Doxy feels a need to clarify tricky rules in side bars with their name attached instead of in the text they're already writing, but okay. Hi there, Doxy!

For a four hundred page pdf, the game opens promisingly, with the usual "what is this" and then telling us what we actually need to read over to get started and separating out what can be picked over when it comes up.

The first chapter is the basic mechanics, starting with the basics trainers have and going through everything from combats to contests before we fill in the blanks on what our abilities are. Trainers are no longer bizarre d20 freaks with absurd stat limits. Now we have Mind/Body/Spirit attributes with specific skills underneath each. A little bit Tri-stat in appearance, but not in execution. These are ranked from -2 to +6.

Trainers also have action points, which serve as their MP to power features or give yourself +1 to a check.


Someone forgot to update all the numbers, it looks like.

Trainers also have Skills. At rank 1 to 6, you roll Xd6, starting at rank 2, then add the relevant attribute. So if you're rolling Athletics, you roll your Xd6 Athletics, then add your Body. Sensible enough; I'm good with all of this except maybe the "Combat" skill, since I don't tend to think about fighting trainers when I think Pokemon. One or two of you may already know that if you read the PTA review, though.

) and Evasion, Special Evasion, and Speed Evasion. Pick the highest relevant one if something attacks you. This is definitely a massive improvement over PTA: now everyone is playing the same game.

Combat stages are still a little too calculator-riffic for me: 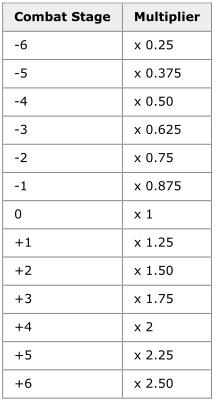 ...but at least they work for everyone.

Everyone gets your D&D4e actions-per-turn, though they've changed the terms up a bit (shift action instead of move). There's some perfectly functional rules on what constitutes whose action and what type of action that is to put Pokemon in balls or take them out again.

An Accuracy Roll is always simply 1d20, but is modified by the user's Accuracy and by certain Moves and other
effects. Note that modifiers to Accuracy Rolls do not affect effects from Moves that occur upon specific results, or
increase critical hit range. These effects

For example, if you use Flamethrower with an Accuracy Bonus of +4 and roll a 16, this would not be neither a critical
hit, nor inflict a Burn.


I probably won't point out all of the missing or conflicting details. You get the idea. It's still relatively easy to follow, but this is extremely unpolished.

Damage is probably the worst offender in this section:

It's as simple as that!

Basic ("struggle") attacks, combat maneuvers, three different types of status effects, healing, death, coup de grace, resting, terrain, suffocating, fall damage... basically there's a lot of pages of dry reading here, without pictures or much other spice as of yet. Refer to it when you need it in play.

Most of the rest of this section is that sort of thing. The only really notable bit is 'injuries'. Whenever you cross 50%/0%/-50%/-100%/etc damage, or take more than 50% damage from one hit, you take one 'injury'. Since you're guaranteed to cross one with the 50% damage hit, I'm not sure if that's a useless rule or if it gives you two injuries. Each injury lowers max HP by 10% until you get to a Pokemon center. Doxy drops by to tell us that these are easily removed if we don't like the tone they create, but suggests keeping it to give larger, rotating teams value and for the attrition during long adventures.

That's... yeah, okay, non-ironic thanks. Whether or not any given campaign uses that, we're given the dial and told what it does.

focus corner: HP, Max HP, and Hit Points. HP is a stat that is used as part of a formula to derive your Max HP. Your Hit Points is a number not to exceed your Max HP denoting your current still-standing-ness. The game doesn't actually fully adhere to this; as you'd expect, things do HP damage and moves can set your HP to a certain number. In fact, I think it uses HP to mean Hit Points exclusively , except where it mentions HP-the-stat and carefully defines them as different.


That's the combat side of things; the rest of this chapter deals with contests. We'll look at that and probably start with trainers next time, as the contests are not as crunchy as the combat rules.