Return to the Temple of Elemental Evil by Yawgmoth

I hope you brought a backup character, because it's time for 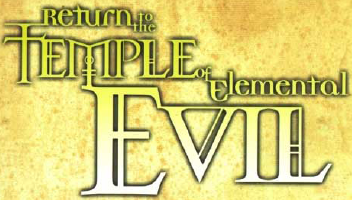 I picked this campaign up back in college to run for some friends, and they being used to DMs who vastly underestimated their abilities (e.g. thinking that four kobolds would be a challenge for a wizard with Sleep) didn't believe me when I told them the thing was a character grinder. I have yet to get a group that runs through the thing without getting themselves killed off. I'll be re-reading this along with you guys and will fill in my own experiences with the content where I'm able, so let's dive right in.

The intro is starts out pretty standard; a brief summary of encounter levels, XP, where monster stats will be located, etc. It also tells you to be familiar with the whole thing before running, which is really good advice because later on you're basically playing SimCult in the temple. It also has something the WLD doesn't: a general way for PCs to acquire gear! It's nothing really inspired, just a couple lines saying "there's a major city about a day's hike northwest of the starting village. PCs can buy pretty much whatever you'll let them have there." It also suggest that you give XP for saving prisoners and returning them home, which I like as it gives the PCs a mechanical reason to not be full murderhobo.

Tharizdun, The God of Angsty Highschoolers

No seriously. He's a god of nihilism who wants to destroy everything because reasons, so all the other gods hate him. For some reason, the entirety of the pantheon isn't strong enough to kill him, so they imprisoned him and removed all mention of him from existence. Unfortunately, the gods couldn't even do that right, since he keeps sneaking into people's dreams and getting them to use his old toys and refurbish his old hangouts so he can get out of his prison plane. He's also got an alter ego called the Elder Elemental Eye, which is what most people worship since it gets you one of the elemental domains and seems slightly less ridiculously psychotic. It's only a DC17 knowledge (religion) check to know about the EEE, 20 to have detailed info. For Tharizdun, the DCs are 18 and 23. A level 1 wizard could take 10 and know this, so I guess the gods are just terribly sloppy when it comes to redaction.

There's also some rules for having your elementals turn evil the closer you get to the center of the temple. This really doesn't matter at all since summoned creatures haven't any free will, and by the time you're using [Calling] spells you're looking for outsiders with useful abilities. Oh well. It's a little touch of flavor.

A Brief History of Evil

25 years ago, a bunch of evil clerics of various races came together to build a big ol' temple of elemental evil. They tricked some of Lolth's followers into joining them as well as getting the demon lord Zuggtomoy and the demigod Iuz to assist in the creation of the temple and the elemental nodes (demiplanes that were siphoning off power from the elemental planes). They got arrogant, started making raids against the neighboring kingdoms, and got a double fistful of retribution for it. The kingdoms couldn't get into the underground levels, so they sealed them off and imprisoned Zuggtmoy down there. Nine years later, they started rebuilding but thanks to bands of adventurers those lower levels were collapsed and Zuggtmoy banished through destruction of an artifact called the Orb of Golden Death. But now the powerful clerics and servants are having a third go at it, building a new temple up in the mountains and being much more secretive; it's up to the new PCs to stop them!

But why should my character care?
Finally, we're given a few answers to that question:


It actually says you probably don't want the PCs to be from Hommlet, since they should want to explore. Because everyone knows everything about where they live and never goes exploring their hometown?

Next time: The adventure begins! The town of Hommlet.