So first things first: these books are tiny and short- we're talking about standard mass market paperback size, 7" by 4", and the corebook is about 135 pages. Tiny, tiny books, but hey, easy to carry.

They're also, like Eclipse Phase, creative Commons licensed, which means I'm kinda surprised to not see more buzz about them, but admittedly, the genre is super-niche.

So, what is Cosmic Patrol?

Cosmic Patrol is a roleplaying game set in a retro future based on the Golden Age of Science Fiction. If you've ever seen a cover from a classic 1930s-1960s science fiction magazine, then you've got the idea. You and your friends form the crew of a Cosmic Patrol rocketship and blast off for action and adventure across the galaxy.


This explanation comes after the opening fiction, a short piece about a Patrol crew confronting a space pirate and his enslaved lizardman troops.

There's a brief overview of the setting (Human-like people were found on Earth, Venus, and Mars, and they jointly colonized Mercury, then form a coalition government called "The Great Union") The Cosmic patrol was originally an "Explore the solar system" organization, but as they've moved out into the broader galaxy, they've shifted to a recon and defense force because it turns out they're a new group stepping into the middle of an ongoing galactic war with no real idea of the sides or what they're fighting over.

So there's a standard "What is a roleplaying game" section, then a note about how the game handles GMing.

It doesn't. Well, not exactly. instead, each player's expected to take turns being the 'lead narrator' for scenes. (Sort of like Rune. Does anyone remember that game? No? Yeah.)

It uses the standard polyhedrals: d4-d20, and suggests getting tokens of some kind for the plot point system. (Notably it doesn't shill any kind of 'official' plot point tokens from the company. Just get beads or whatever, apparently.)

The intro chapter closes out with, well, probably the least likely sidebar I've seen for any RPG: An explanation for what a theramin is and why you should look up theramin music to set the mood for the game because it got used in a lot of old pulp space serials.

Next up: The Gazetteer.

This chapter opens with a Jules Verne quote, so props there. Then there's a couple of short in character pieces (A dude named Coordinator Dyson addressing Cosmic Patrol Cadets at Space Police Academy, and an excerpt from a Cosmic Patrol primer- Basically talking about the role of the patrol and the three solar races participating in it: Earthmen started the big push outward and are natural diplomats compared to the others, which is a nice change from "the average guys, I guess." Martians do the muscle with Martian Space Axes, and Venusians tend to fill scientific and exploratory roles.

After that, we jump right into a timeline. Unlike Rocket Age, which is very clear about where it's taking place in alt history, Cosmic Patrol...doesn't at all; time is divided into the "Pre-Cosmic Era" and the Cosmic Era" with just a note that "Oh, the atomic bomb happened well before anything we care about".

So the timeline starts about 30 years before the game begins, with the discovery of a new comet by a Doctor Seneca Lelonde. As it draws closer to earth, it looks like it's going to hit us! Worldwide panic ensues, but then the comet breaks up and while several fragments do make impact, the Earth isn't destroyed. Hooray!

Instead it's invaded. Creatures described as "Lizardmen" appear to be concentrated around the impact zones, spreading out to attack, raiding and looting. Fragmented earth nations unite and push the lizardmen, who are called the Uth back, eventually wiping out the last remaining Uth on Earth.

Apparently, the Uth were some uncurious motherfuckers, because they've got a huge treasure trove of scientific loot in their hiveship, including an element dubbed "Contraterrene". (Basically anti-matter), some of which could probably have won the war for them if they'd hadn't basically been pirates and thieves more interested in looting. The thing is, a lot of this stuff isn't Uth design. There's other aliens out there. Are they hostile? Who knows. The temporarily united earth government agrees to form the Cosmic Patrol to investigate, and starts formalizing itself into a more permanent united government.

This all happens in the space of 3 years; a year later, Patrol scientists develop their first robots, and two years later the Moon expeditionary Force is ready, on a brand new rocket with a contraterrene drive, ready to go colonize our satellite and set up a moonbase.

So, lacking any way to make a moon base, and after a dressing down of the full governing council by Coordinator Dyson, the plan becomes "Make orbital platforms, and check our other near neighbors for intelligent life/enemies"

It turns out that the inhabitants of both Mars and Venus are mostly human, though the Red Amazons of Mars are generally bigger and stronger, and the Venusians are weedier and more intelligent, but also prone to hubris (A few generations back their robot creations rebelled against them, and they've got a strong prejudice against earth robots as a results...not without reason, since at the first meeting, some Venusian Automen hacked the Earth robots to turn them against organics.)

Eventually, Earth, Mars, and Venus unite under a single government, with all of them contributing to the patrol. (Venus agreed immediately, and it's implied that the Martian Amazon queen agreed to it after 'intense private meetings' which could be either sex or fighting or both.) The Moon men are mostly left alone because fuck telepathic monsters who can wipe out whole ships, that's "Here there be dragons" stuff.

Shortly after, Venusian and earth scientists working together develop "Fractum mechanics" and a Fractum drive, which will allow faster-than-light travel. The first Patrol Rocketships with Fractum drives discover signs of fighting all over the place, but it's unclear who are the sides and what they're fighting over. One ship run into a region of space called the Coalsack nebula where all life was wiped out with some sort of super-weapon. It's renamed the Coalsack Dead Zone. Eventually, at least one of the sides is encountered: The Eiger Empire, over 10,000 "Astrons" away, are...okay, they're basically the Sontorans from Doctor Who; an army of angry war-clones with giant heads. The ship that runs into them leads them on a wild goose chase to keep them from finding earth before breaking loose.

Oh, and there may be a new hostile life form that just evolved in the Dead Zone. So there's that.

The timeline's followed with a summary of rocketships (Either purpose built or general purpose tramps: Most PC ships will be tramps because they're general purpose troubleshooters) and the sort of weapons used by the core worlds: There's your standard raygun sidearm, which has a limited range, atomatics, which are basically gauss guns that still have a kick- they fire tiny slivers of super-dense matter, which requires a shock absorbing backpack to use, Venusian anti-robot phase guns, and the Martian axe, which is made from "Martian Red Steel" and can actually parry Atomatic rounds, like a lightsaber, if Jedi were space amazons/vikings.

We'll finish up the chapter with the next post. 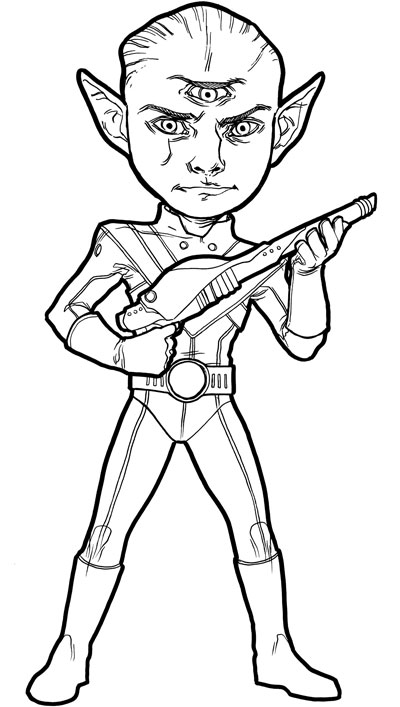 So after the general outline, it moves to a slightly more in depth breakdown of things. One thing all the entires have is tags, which are sort of like Fate aspects but even more loose. Most entries have seven. These are basically used when narrating a scene so the person who takes over next has something to hang things on.

The inner planets section talks more about how people are kind of weirded out that humans are found on all three planets; no one's sure which was the birth planet who seeded the other two, or, possibly more concerning, all three planets were seeded with humans at the same time by something from the outside (Parallel evolution is dismissed as absurd.) All the inner planets have rocket launch platforms in orbit- the experience with the Moon men made the patrol dubious about setting up on natural satellites in case of more telepaths.

Mercury is a shared protectorate of the alliance, with no native life and temperatures so hot that the only thing that survives on the surface are robot miners, which the Venusians aren't happy about but can't come up with an alternative for. Their orbiting platform coordinates the robot workers and is run by a Venusian, which is weird, because, well:

Venus is still recovering from the robot apocalypse; hundreds of years ago, they had a thriving civilization, with robots called 'automen' handling all the dangerous and practical work while the Venusians were free to theorize and focus on 'pure' sciences. The Automen woke up en masse and rebelled, and the Venusians tried to order them back to work. This ended badly. Right now it's a cold war of sorts- Venusians have off-planet capability, while the Automen wander the wilds of Venus, moving to unknown purposes. Their orbiting platform is science and discovery focused, performing experimental work with resources they just didn't have after the robot wars.

Earth is pretty much as presented, the core of the Cosmic patrol command, with three different orbiting platforms, and mostly recovered from the invasion with the help of reverse engineered supertech.

Mars is resource poor, which is why the martians never moved much past the late iron age. No prime directive here, though- they've been getting tech shared and recruited into the patrol, with their own orbiting platform in place...mostly staffed by humans and venusians because a lot of martians don't see the point.

The Outer planets are actually sparsely explored because the fractum drive makes interstellar travel easier than going to the outer planets, who have to rely on rocket travel instead There are satellite-hopping space vikings going from moon to moon around Jupiter, who may be descended from a more advanced civilization. Saturn is...pretty much just regular old Saturn, with no surprises and back-burnered plans to build a base there. Uranus has flying jellyfish, and Neptune is a jungle world, home to hypnotic carnivorous flora called "The Mind Plant" because the Patrol isn't great at naming sometimes. No one knows if it's sentient, but it's actually capable of both slow hypnosis and psychic blasts. Pluto is just Pluto, though there are signs that the Cometarians have settled there a few times.

Cometarians? Right. Ever see the Pod People ep of MST3K? Several systems the patrol's come across have things that look like that living in them, (In fact one of the tags for the cometarians is "Trumpy") They're mostly encountered alone, are very uncomfortable with gravity, and are usually hostile if you come into their territory. 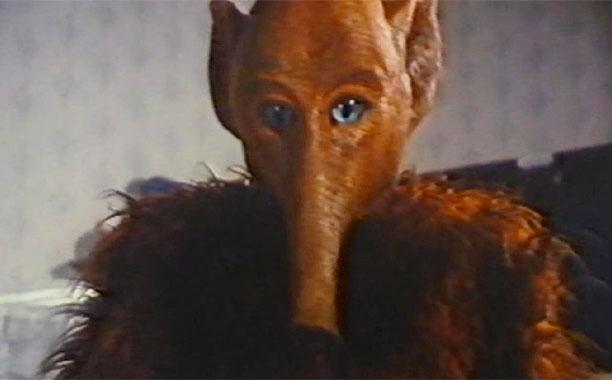 It turns out that the Coalsack "Dead Zone" is inhabited by the Hakhaze, who are basically sapient fungus living in symbiosis with some kind of reptile; they're incredibly aggressive, and the best weapon against them turns out to be the Martian axe.

Other species encountered in other systems include Annorans, stone agewarrior cat-people; the Zorn, who are basically friendly-but-eccentric full replacement cyborgs, more Uth, and the Baetans, a tall, skinny humanoid species that evolved on a tidally locked planet with a super-scientific day side and a savage warrior culture on the nightside. (Just once, I wanna see this reversed, but this is not the game that's going to do it, I guess.)

Oh, and then there's the planet Metalloid, entirely inhabited by sentient robots who had the bad luck to run into an all Venusian patrol ship who immediately freaked out and opened fire. Good job guys. Apparently they have the patience of saints and are just ignoring peace offerings instead of out and out declaring war, though.

Next time we hit the actual rules.