Your mother would turn over in her grave if she were here to see this.

Joints & Jivers, Part 0: Your mother would turn over in her grave if she were here to see this.
In 2009, a rather clever parody of old blaxpoitation B-movies called Black Dynamite was released in theaters, and it was good. Before long, a few people on /tg/, 4chan's Traditional Games board, decided they wanted to play a tabletop game based on the genre. Normally, this would result in a few grognards.txt posts and a well-worn lesson that the internet and race relations do not get along, but every so often, the stars will align, thirty virgins will be sacrificed under the shadow of a blood moon, and 4chan will do something worthwhile.

An anonymous poster, dubbed Funky Anon, cobbled together a simple set of rules. It was little more than just a few character archetypes and some simple “roll 1d6+modifier” rules, but it placated the thread. The story could have ended there, had Viral (of Engine Heart fame) not shown up, and made it into something more. With added depth, refinement, and careful navigation of certain problematic issues Joints & Jivers came into its own.

The game was, and is, still very clearly a send-up to the genre, but with much better handling of race than the 'source material'. Still, going in, I feel like I need to introduce its origins. It's an interesting game, and can be a blast to play with the right crowd, but in the wrong circumstances, it can make for a rather uncomfortable evening, as everyone has a slow, drawn-out realization that one of their friends is actually kind of incredibly racist.

Next Time: Your bad-ass self.

Who the hell is interrupting my kung-fu?

Joints & Jivers, Part 1: Who the hell is interrupting my kung-fu?
The year is 197X, the Age of Funk. And that's about all the description of the setting we get.

It's assumed that you'll know exactly what you're getting into when you pop open this PDF, as there is no introduction chapter at all, just a glossary with a few basic terms, and a mention that the GM in this game is referred to as the FunkMaster. The PDF itself, however, is formatted to look like it was made in the 70s, complete with a fake-typewriter font, and the entirety of the rules text being written in jive slang.

Still, to help ease the reader into the setting, there is a fake newspaper article on the first page that... you know what, there's no way my description can do it justice and the PDF's free on the Viral Games website anyways. 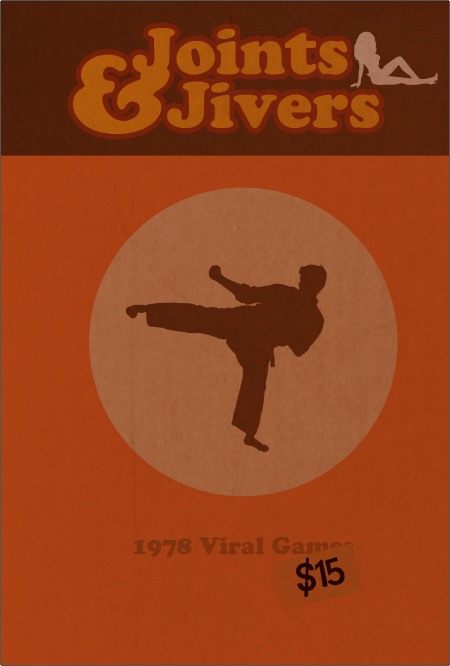 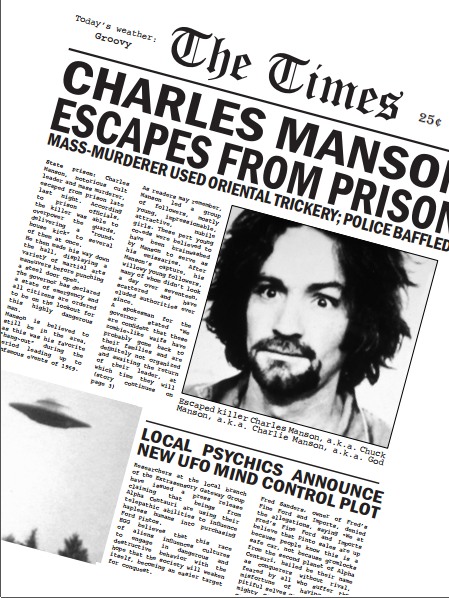 We then jump immediately into a character sheet, and “Chapter 1: Your bad-ass self”, character creation. First comes a short personal section. Every character has to choose a Handle , what they go by, a Crib , where they chill, a Gig , what they do for a living, and, if the FunkMaster allows it, their Wheels , what they're driving. These are purely for show, as the stats for your Wheels are elsewhere on the page. As a minor flaw of the thrown-together design, it's not mentioned how you decide what your Wheels are until a couple more chapters in.

The meat of the system comes from the five main stats, called Scores. Three are appearance-based, Hair , Shades , and Threds . A naked man would have 0 Shades and Threds, but it's specifically mentioned that a bald character can still have a decent Hair score by having a good 'stache. The better your clothes and shades, the better your Threds and Shades. It's also briefly mentioned that getting roughed up can temporarily lower your stats (Hair especially) until you have a chance to fix yourself back up.

A starting character is given six points to distribute between the three, with the caveat that you can't have more than 4 points in Threds, but have to have at least 1 point in it. Only Threds has this restriction, strangely. Once you've made your decision, you look into the back of the book, and pick out clothes/shades that totals up to the points you've given yourself. You don't have to pay for your starting attire, but can buy better ones later.

The other two stats are an inherent part of who your character is. Hip-Cattery is a sort of social grace stat, gauging how well you show off your style. It is also the only stat that can never be lowered by outside circumstance. Funk is how much punishment you can both take and dish out, and is “so important it's on the character sheet twice ” (more on that in a second). You get six points to split between the two, with no limitations.

Once you have your five Scores, they can be used to calculate your three Ratings ( Funk , Tough , and Boogie ,), derived statistics that are your actual modifier on checks in most situations. A check is defined as rolling a d6, and adding the appropriate rating. You can add Points to boost this, as well, but they aren't mentioned until next chapter, to prevent a complete sidetracking.

Funk is used when you perform “funky” actions like busting through a window or kicking a ninja in the head. When you want to hit someone else, you roll a d6, add your Funk rating, and compare it to their Tough rating. If your total is higher, you hit, and reduce their Funk by one. Otherwise, nothing happens. When your Funk hits 0, you're taken out, and it takes one week to recover. You also get back a single point of Funk, up to your maximum, each time you roll a 6 on a Funk check. The other two Ratings are a combination of two Scores, but Funk is all by its lonesome (hence it being the 'most important score'). It can, however, be increased by certain Threds (mostly things like karate gis).

Tough is your combat defense stat, and any Funk rolls need to be greater than your Tough for them to do any damage. Guns, however, only need to have their damage rating tie your Tough. Tough is also used when chasing someone, as an opposed Tough vs Tough check, with ties going to the chase-ee. If the chaser is in a vehicle, however, they get to use Funk instead, (as they're not chasing you, they're trying to run you down). Tough is calculated by adding together Shades and Threds, which creates an odd situation where getting your shades knocked off your face makes you more vulnerable to injury.

Boogie , as opposed to the other two Ratings, is purely for social situations, and is almost solely used in Boogie vs Boogie opposed rolls. The two in-book examples are trying to get a 'fine mama' to fall for you on the dance floor, or cruising around town showing off your Wheels. In both cases, ties still go to the defender. To calculate Boogie, you add your Hair score to your Hip-Cattery score. You can't have much Boogie with a messed-up 'do.

Next time: What the hell are kung-fu points?