Alien Summit by Plague of Hats

I'm taking a hiatus! I was already taking a year+ hiatus from my MERP review, which I really do intend to finish, honest. My hiatus from this hiatus is a working vacation, where I review a gift from a TG Secret Santa. No, not Warbirds. I got that this year! This game is from last year, and also it's really short so it'll be all in one post. When I received this gift, I was eager to give it a try. It's short, you pick it up pretty quickly, and it looked simple and interesting enough to blow through a couple hours here or there. I felt kind of guilty not getting around to F&Fing it, because my Santa seemed interested in what I thought of it.

Embarrassingly, I can't dig up the old thread and I've forgotten who it was. 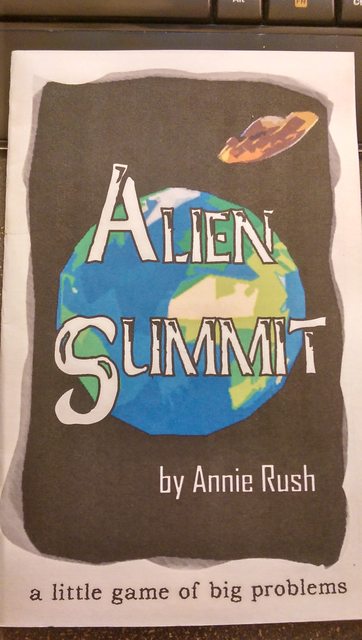 I couldn't find a good picture online, so have one from my phone.

This little 12-page booklet opens with a story of boredom. The author and her friends are waiting for more friends to arrive to begin an "Epic Tabletop Game Weekend", and she wants to fill the void with a non-fighty game. Unsatisfied with available options, she created Alien Summit .

The core premise is this: There are four "major" races in the galaxy, and there's some problem they need resolved through a diplomatic meeting. They choose Earth as their meeting place, because it's a pre-light speed backwater that's considered neutral ground. Plus the Host, the GM, or mediator of galactic disputes, has apparently been roughing it and is already on Earth.

Our first step to actually playing is for the Host to deal some cards from a normal deck. You've got your Race Card, which determines what alien race you play, and it lays face up in front of you. You also get five Quirk Cards in a private hand. If you don't like your Race Card, you can swap it with one of your Quirk Cards. If you don't like one or more of your Quirk Cards, you can discard and get dealt back up to five, once.

Should your Race Card be Hearts, you're Tokwa . They're communists who live underground next to magma rivers. They've got pale skin, but are usually so covered in soot they all look the same shade of black. They worship Iffua, a mermaid who swims in molten rock and who might just be a hallucination from all the drugs they take. Sometimes, one of them takes an extra dose and becomes a Prophet.

Hapnith live in bunny burrows under the roots of trees, and that's what you are if your Raced Card is Spades. They go out into the fields during the day, to do…whatever. None of any of this is very clear, which might be a good jumping off point if it didn't feel like there was a clash between "galactic confederation" and "fantasy wood nymphs." Oh, speaking of nymphs, these guys revere forest spirits. They're a democracy with an elected leader, and their society also has a separate monastic order that's respected and "given wide berth" by everyone else.

The Marsec are who you represent if your Race Card is Clubs. They live in cool, wet caverns, sort of an in-between of the Tokwa and Hapnith. Also, they're just straight up hippies, only they're Space Ur-Hippies, because they're aliens like everyone else and they invented narcotics . Literally the first species to discover narcotics, as if that even really makes sense in a way that matters. They have a monarch but mostly live in anarchistic bliss because they just want to love everyone and create art (and get blitzed).

Finally, if you draw Diamonds as your Race Card you're Fasinn . They're the only aliens who don't live underground. Instead, they're nomads. Sort of. They have one city where all the women live, where they raise kids and do science and stuff. The men roam outside in nomadic bands. A precise but unspecified number of men are allowed inside each night. Remember, this is one of four major alien races that make up a galaxy-spanning civilization, and not some half-baked fantasy plop.

Here's how the Fasinn's description ends

Far outside the city, mixed nomad groups roam. When members of these groups show


Each Race Card confers three "powers." The first is actually a cultural belief that just shapes your characterization. Tokwa admire strength, Hapnith think "seeing is believing", Marsec have faith that everyone is fundamentally good, and Fasinn think everyone should "stop and smell the roses" but also will do anything to anyone to get what they want. Uh, alright!

The second power of the Race Card is, uh, to "play the Race Card." Ha ha. It outlines a stereotype about your alien species that others believe, and if someone invokes the stereotype, you can "play the Race Card" by calling them out on their shit. Doing so means they owe you a favor. You can do this twice per game. Every stereotype is formatted as "Oh, so just because I'm $species means I'll do $bad_thing to turn your kids into $stereotype."

While there are some ups and downs elsewhere in this tiny game, this is definitely the lowest point. It's an awful pun and a stupid, offensive idea.

The third power of your Race Card is some direct, remarkable thing that you can do with other people once per game. The preamble to this talks about it being physical, but they're all magic-y, mental powers.

The Tokwa can decide new emotional contexts (turn trust into mistrust, etc.) for the feelings a target has toward two specific groups. These "groups" can be multiple people with a common trait, or just one other person. Hapnith can force someone to tell the truth. Marsec can telepathically communicate ideas to any number of people at any distance, but each person can only receive a message that could be spoken with a single breath. At last, the Fasinn can command someone to refrain from performing a specific function for 24 hours, like walking, eating, or speaking. They're specifically prohibited from telling someone to stop breathing or otherwise forcing suicide.

Each Quirk Card denotes a specific fact about your character, based on its value; face cards have four different effects, and which one you get is based on your race. Some of these seem interesting enough, like "Perfect Memory", or "Jargon", the latter of which lets you speak in a way that seems normal, but secretly communicates other ideas to selected targets. Others are not so great, even actively annoying, like "Think Time" where you have to take at least three seconds to think before saying anything, or "Cryptic Brevity" which makes it so you can only speak four words before having to wait for someone else to speak.

Face cards are much more interesting, because they tell you a lot more about your character and there's a lot less "this will never come up" or "you must actively annoy everyone else." There's some theme to each kind of face card, like how Jacks are mostly you worrying about or struggling against something, while Kings say something about you that imposes on other people. These introduce some good personality conflicts into the game.

If you take the Joker as your Race Card, you're a Human, probably roped into all this by the Host for some reason. At least, that's what I think the rules say. This is actually covered under Quirks, and it's conveyed in one pretty unclear sentence. No mention is made of what happens when you have face Quirk Cards.

Finally, you discard down to three Quirk Cards. If you swapped out your Race Card, you can't discard your original one.

Suddenly, we come to a combat system that is honestly surprisingly complex. It's also bad. Everyone starts off enumerating their Advantages, like "I have the high ground", "I will fight with religious fervor", or "My pistol has a laser sight." You act in order and number of Advantages, meaning that the more creative person just gets to do more, and do it earlier. You convert each Advantage into Actions, like the following:

• Convert one Advantage to attack someone. You have to describe this in subject, verb, object fashion—"I hit Max in the shoulder"—because fuck you, I guess. This is a bizarrely anti-creativity part of the game. Your target can burn two of their Advantage to defend, negating your attack, and further screwing them over against higher-Advantage players.

• You can convert X Advantage into setting up a defense before you're attacked, where X+1 becomes the amount of Advantage someone else must burn to be able to attack you. And then you can, presumably, burn two more to negate the attack anyway. Exciting!

• You can interrupt another's action by burning three Advantage. You may need to burn more to do something complex. This may seem incredibly vague, but I'm only summarizing a tiny bit.

And that's the combat system! A successful attack inflicts "broken bones, humiliation, or death." There's no actual resolution mechanic here, it's just an out-of-place intiative/action point system with almost nothing at all beyond that.

The final page starts off as a sort of personal-sounding "This is how I envision the game…" from the author, and then launches into some very brief, inoffensive GMing advice like "draw cards to create the Host like a player would" and "make the characters' Quirks come up in the story."

This could've been a pretty good party-game pamphlet. Instead, it's too long because the author wanted to write more than she should have. The crunchier parts of her system are the worst, and actively hinder the playing of the game. I really like the basic premise of drawing cards to outline your character, but most of them will give you useless or annoying traits. Then there's the combat "system" which barely does anything, and what it does actually do, it's bad at. The tone of the race descriptions is just plain inconsistent. The cultural broad strokes at the beginning of the book all read like slightly atypical medieval fantasy races, while the game's premise and everything else, including the species' super powers, are decidedly sci-fi.

However , it's very easy to extract the good parts of the game and have fun with it. You could just read up through the Quirks section and go have a ball. That's what we did the second time we played, because "alien diplomats with randomly assigned characterizations" is a lot more interesting than "racist stereotypes" and "shitty Shadowrun action points." I think the best part of the game is getting you to try something different, and it does do that.

Half a good book seems to be what you can expect out of most RPGs, even if they're only a dozen pages long. Luckily, my Santa also sent me Dungeon World!