Immortal: The Invisible War is an oddity of the early nineties, written by Ran Ackels and published by the little-known Precedence Publishing in 1994. I can't pretend that I've got much experience with this system; I bought the book at a charity second-hand book sale about a year ago. Unless any of the good Friends of FATAL and Friends suggest otherwise, I'm going go through the text sequencially, starting with the cover and a brief rundown of the game this week.

For those of you who like judging books by their cover, here it is: 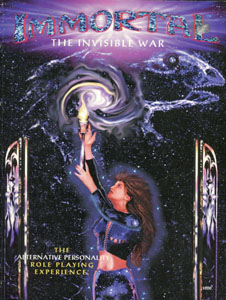 Immortal is best known these days for its bizarre colour-coded dice mechanics, batshit-crazy backstory and profound overabundance of jargon. How overabundant exactly?

Is that the one where, rather than gathering dice for conflict, you allocate your motes and prepare to clash?


Dude's pretty much bang on the money. Like a lot of games of its vintage, Immortal uses system jargon as a way of immersing you in the game world; White Wolf in particular has made this a signature of their various product lines. While some might find it insufferably pretentious, others would prefer to play a Mage with a Gnosis rating than one with an Effective Caster Level. Both terms are measurements of an abstract level of magical power, but one refers to phenomena within the game world, while the other refers to things explictly outside of the game.

Regardless of how you feel about system jargon, it's difficult to deny that Immortal makes poor use of the concept. Part of the problem is needless proliferation; it's as though the design brief stated that dice rolled for one reason simply had to be named differently from dice rolled for any other. The other problem is that Immortal so often favours jargon over the simplest, most basic language of RPGs and gaming in general that it seems almost embarassed to call itself a... 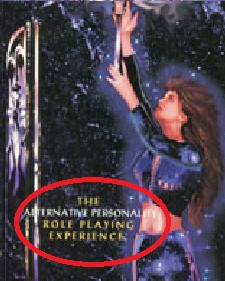 A lot of roleplaying games can be fairly accused of taking themselves too seriously, including many of the ones featured in this thread, but none moreso than Immortal: The Invisible War. The whole game - setting, system and all - is ridiculously po-faced. Let's have a look at the blurb, shall we?

When the Sanguinary fled the crucible...
When the Sphinx was not stone but flesh...
When Paris slew Achilles before Troy...
When Authur wept, betrayed...

YOU KNEW...
The force that compelled Jack's knife in London...
The painter, Adolph, who set out to "purify" the world...
The sniper whose bullet claimed Kennedy's life in Dallas...

THEN YOU TOOK A LONG WALK INTO FORGETFULNESS...
AND THINGS HAVE ONLY GOTTEN WORSE.

IT'S WAKE UP TIME.

The age of innocence is ended. Immortal personas everywhere are waking to a new experience in role playing unprecedented in any previous gaming system. Merlin, Hercules, Marilyn Monroe, these and many other figures of legend are very much alive... influencing affairs in the mortal Habitat just as they have for millenia past.

YOU are the fabric of legend. Now the time has come to shed mortal illusion and resume your place in Perpertual Society; to awake and rediscover your own fantastic past.

So... so there you have it. Immortal is a game about playing yourself, if you had a bunch of imaginary past lives and ~*~powers~*~. Or maybe you're playing someone playing a game about themselves? It's not yet entirely clear. At any rate, I'm already starting to feel a bit uncomfortable with the subject matter.

I Open The Book

The cover page features a warning of some sort, "No sanctuary is Eternal." It's kind of jammed in there between the Invisible War subtitle and Ran Ackels' byline. Is it meant to be a sub-sub-title? The name of the first of many volumes of the Immortals: Invisible War gameline? There's no indication given. I'm not even sure the phrase crops up again in the text.

Flipping over the page and we get a nice long illustration of some sort of a dour, shirtless angeldude with a vague resemblance to comedy auteur Stewart Lee. It's RPG art, after all, so it isn't like this slice of export-grade beefcake exists in a vacuum; this is the sort of stuff that Dungeons and Dragons was being daubed with at the time. Immortal, angeldude is saying to us, is a game that the ladies will like too.

The credits and legal info are fairly standard, although there are a few elements that jump out, including our first real bit of system jargon:

Participant actors and narrators may reproduce the Persona Record Sheet provided herein for personal, non-commercial use only.


The term Narrator I don't really have a problem with. As a word for GM, it beats the hell out of nonsense like Master Creator and is certainly more explicit in purpose than Storyguide – unusually explicit by Immortal's standards, in fact. But actors? Is this a theatre manual I've bought for myself in the year 1994? If so, what's it doing on the shelf at this funny smelling shop full of comic books? If I'm the Actor, does this mean that the Narrator is my director? Will I be following a script? Oh shit, if I'm the Narrator, does that mean I need to write scripts for my friends? Donnie hates Mr Pike's* drama class, he says it's gay and that Dungeons and Dragons is better and if we can't play at Donnie's place that means we'll have to play at mine and then I'll have to explain all this to Dad and convince him that it isn't Satanism and...

At best, calling players Actors adds an uncomfortable gloss of pretension to proceedings. At worst, you're alienating the sort of people who are actually going to be the audience for your game. There's a case to be made that using non-gamist terminology will help expose your game to new demographics, but in this case it really feels like putting all of one's eggs in a particularly numinous basket. True, World of Darkness had Storytellers and Chapters and Troupes and stuff, but it also had Players and most importantly, it straight-up told you that it was a game . Also, player is an olde-worlde synonym for actor, which really suits Immortal to a 't' if you think about it.

Also, it looks like the preferred term for player character is going to be Persona. Let's...let's just move on.

The credits page reveals that Ran Ackels did most of the work on this book, but there are a few other people credited with vital things like layout, editing and additional development, which is encouraging. The list of playtesters is impressively long (33 names) but does include the name of the game's producer, for instance, which I think is sort of cheating. There's also this

Persons having difficulty distinguishing between fantasy and reality are expressly discouraged from reading or participating in Immortal.


Which is cool, I guess, and certainly makes sense given the moral panic about RPGs that had happened only a few years before the game came out. I suppose it's also relevant given that this is a game where you play yourself, but with powers (maybe). There's a list of who Precedence Publishing is (7 people), a note about gendered pronouns (solely used for clarity and not to encourage a male point of view) and a standard "any similarity with persons living or dead."

Let's move on to the table of contents. It's this:

Audience participation time! See if, using this faithfully reproduced table of contents, you can figure out what rules, if any, can be found in what chapters. Truly a vital skill, because, as a keen reader will note, there's no index!

Next: Oh right, the intro fiction is still coming, I promise.

*a member of the irl cool guy gang