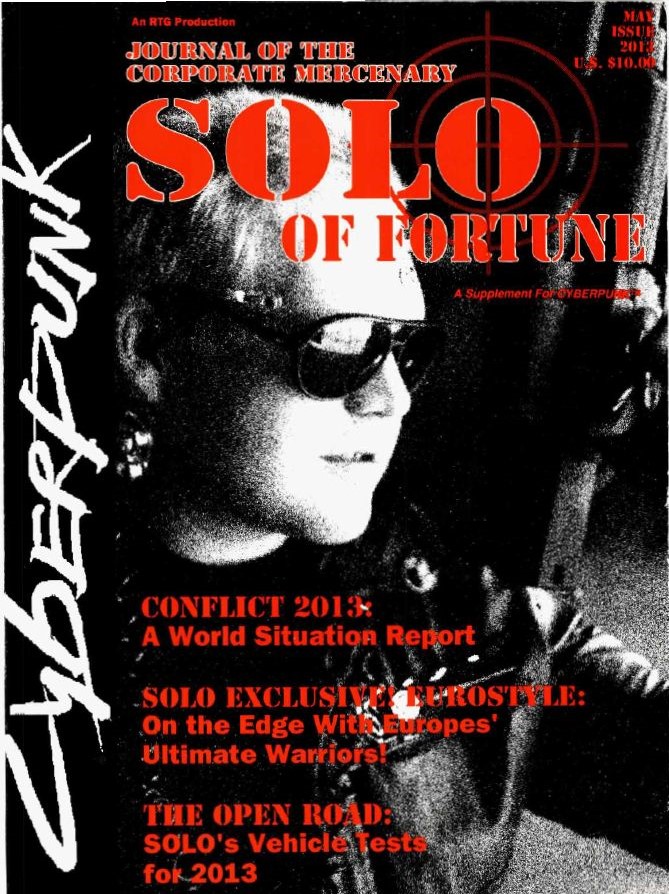 It’s impossible to talk about Cyberpunk 2.0.2.0. without discussing Solo of Fortune, even though it is technically a 1st edition supplement. Both the core book and many of the early supplements point to this book for full vehicle rules. And honestly? I think it's a good setting book.

In order to review Solo of Fortune in a comprehensive manner, it’s necessary to look at the rules it was operating under. The original Cyberpunk was a boxed set that came with three handbooks: Living on the Edge (character creation), Friday Night Firefight (combat) and Welcome to Night City (setting). I was able to find a version online and here’s a rundown of the major differences 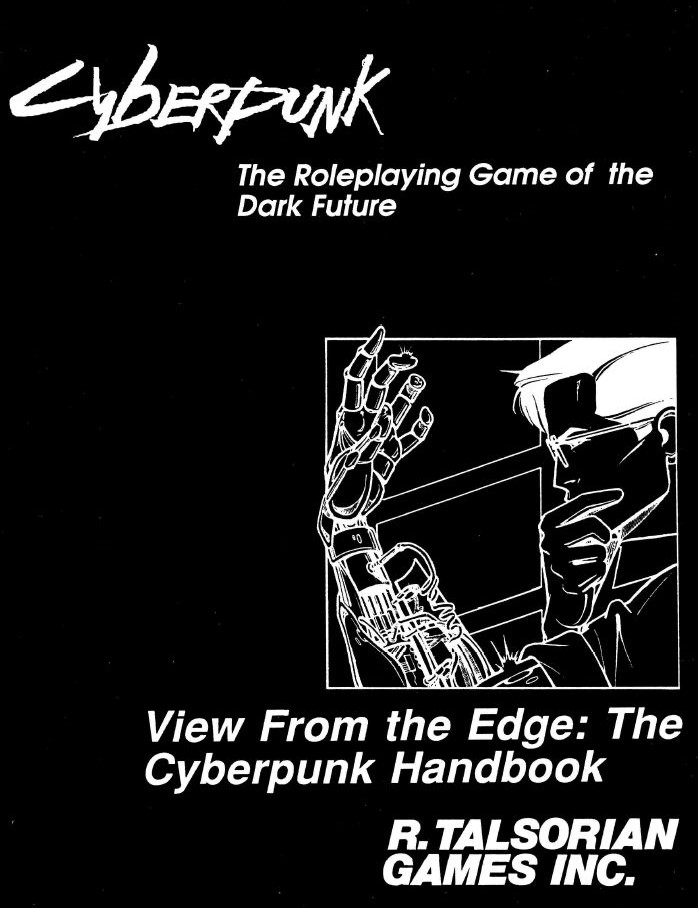 From Living on the Edge:

the sad consequences of reading too many hacking rules

I didn’t read through Welcome to Night City, but I did a quick scan and it does include Johnny Silverhand’s highrise-trashing adventure. What surprised me is that the sidebar advice on how to turn it into a scenario seemed more comprehensive. It also confirmed my suspicions that Rogue and Akira were originally designed for 1st edition, and they were just straight ported to CP2020 without any consideration for how the rules would change their effectiveness. The setting remains basically unchanged between the two editions (the year is 2013 instead of 2020).

Those are the big differences between CP2013 and CP2020. I can’t really call this a full review because this is all based on a quick read of all three books in one night. However, before we move on to Solo of Fortune, there’s one more thing we need to talk about. Solo of Fortune is written as an in-setting magazine, but it’s based on a real-life publication called Soldier of Fortune. This magazine was founded in 1975 by Lt Col. Robert K. Brown, a Green Beret who served in the Special Services in Vietnam. It was a mercenary magazine, ostensibly about reporting on foriegn wars. But it was also for a time a place to put want ads for hired guns, including the recruitment of forces for the Rhodesia Bushfire wars and other examples neo-colonialist THE GREAT STRUGGLE FOR FREEDOM. This aspect of the magazine was discontinued after people began using these ads for contract killings, and the victims’ families went after the magazine for publishing the ads. Soldier of Fortune would continue to print until 2016, and still distributes digitally.

So in order to best appreciate this role-playing game supplement, I cracked open an issue of this rag for survivalist gun nuts, proto Sov cits, and war crimes enthusiasts. When I started, it didn’t seem like the best idea I’ve ever had. That feeling went away when I saw the cover of the issue I picked out: 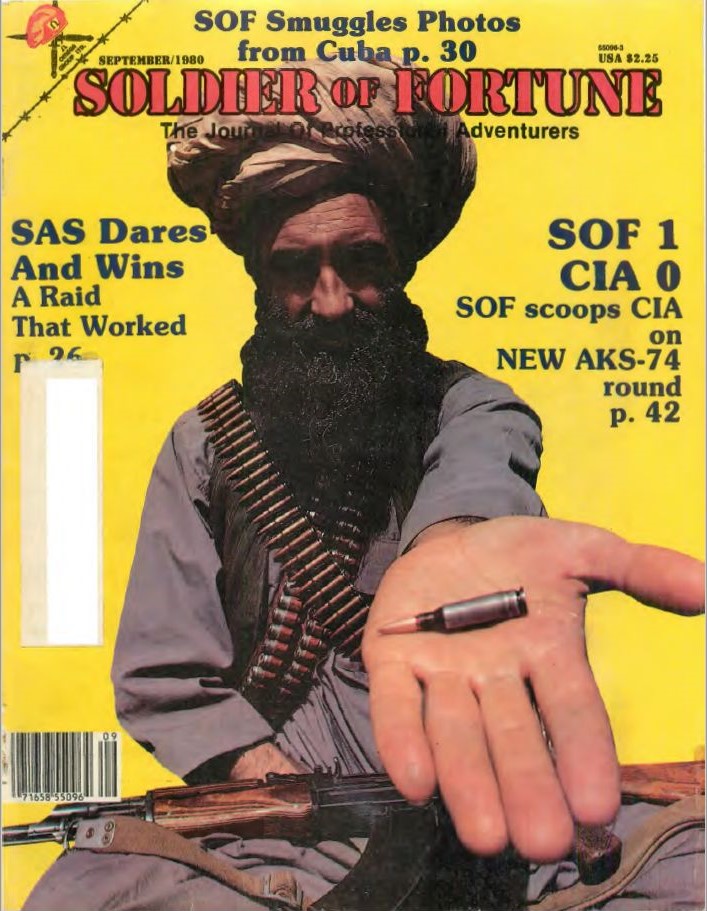 The issue is an avalanche of American right-wing nonsense, disaster porn that reads like the set-up to airport novels (and probably was actually plagiarized), racism, overblown sense of importance, war crimes apologia, and Totally AccurateTM accounts of battlefield exploits. Plus ads. Lots and lots of ads. Ads for guns and knives. Ads for memorabilia. Ads for survival books and autobiographies from such trustworthy individuals like Anthony Herbert. Ads to employ “ex-soldiers” for whatever purpose you could think of. The layout goes from bland to atrocious, and the prose is no better. There’s even a call for “Volunteers” to go murder people in the name of Freedom.

I could probably start a whole thread in TFR going over this issue alone. But back to the subject, Solo of Fortune mirrors the layout and writing style of Soldier. Thankfully there’s no obvious political leaning in the writing. While this may seem like an obvious thing to do, this is very pre-internet and it could have been very easy to do something dumb like copy the source material too closely. Plus, given that violence really is everywhere in Cyberpunk, a magazine like Solo would probably have a more general audience. That being said, it does raise the question of whether the narrators are reliable. There’s a letter section at the beginning and one reader is pointing out the errors in a past articles (including the big one of the city no longer existing), to which the editor responds “it was a simulation, duh.” And previously I thought that I, the RPG reader, was supposed to side with the editor over this fictional magzine reader (who is being very snobbish). Now that I know more about Solo’s inspiration, I’m not so sure. But then again, making the narrator unreliable and also using the articles to post rules would be its own can of worms, so

Solo mimics Soldier saturation of advertisements as a way of introducing new gear. There are a couple of items that go on be included in CP2020’s core rules, like the MetalGearTM body armor. The articles themselves are framing devices for campaign seeds, potential opponents, and alternative rules. Most are really solid, and even the vehicle rules section that I’ve complained about is at least provided rules that the core box set didn’t (and should have if Nomads are a core role). The only article that I can’t endorse on any level is the firing range article. While it is responsible for introducing the Sternmeyer M95-A, the article itself is all gun talk. As someone not into guns, it’s very hard to stay attentive about fictional guns. But we’ll get to all that when we cover the articles in detail.

Next Time: and the name of that door gunner was Albert Einstein!

Solo of Fortune begins with an intro from Mike Pondsmith that explains the conceit of the supplement and how RPG readers would use it. The first section is “instant Response Time,” the letters from readers. The first one is the one that I talked about at the end of last update, and on the whole it’s more reasonable to see it as making fun of people that write long

letters than suggesting some sort of unreliability. The second letter is from a Nomad thanking the magazine for depicting Nomad Families in a sympathetic light. The third letter his 1/2 gunpinions, and 1/2 rules FAQ (you don’t need a separate interface for each weapon). Tucked within the letters is the debut of MetalGearTM body armor. Because this edition doesn’t have EV, having 25 SP to all sections is pretty fantastic. You even have the option to buy it in separate components. 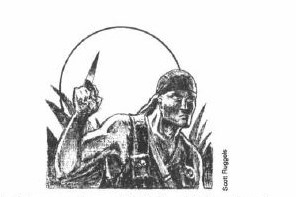 The next article is “I Was There”, a first-person account from Rex (Maddog) Burton, A Central America Vet who now works for Trauma Team. Rex regals the readers with one of his patient retrieval jobs, killing two operatives that had it out for the patient and blowing up an AV. It’s okay, though it wasn’t the most clear at times (it took a couple of re-reads to make sure that Rex didn’t brag about blowing up his own reinforcements). It does an okay job selling a Trauma Team centered game, though not was well as the dispatcher log at the end of CP2020 (which was reprinted from first edition as it turns out). Alongside the conclusion of this article is an ad for weapon modifications meant to bring older guns up to par with Cyberpunk firearms. But until Solo of Fortune, CP2013 only had real-life guns to choose from. Fictional weapons are only just introduced in this book, and we’re still missing Core book staples like the Arasaka Minami 10, the Armalite 44, or the Ronin Light Assault Rifle. There’s no balance to the modifications at all (getting a +1 accuracy costs much less than making the gun a bullpup). 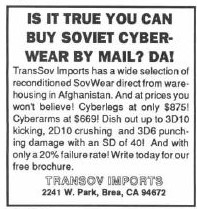 That leads us to our first big article: “Cyberpsychosis: It Can Happen To You.” by Rich “Meatball” Cramer, M.D., E.M.T. He puts a photo of himself at the beginning of the article, but it’s a pretty goofy photo that undermines the serious tone of the rest of the section. Maybe Rich is a regular writer and he normally talks about taste-testing rations.

The article opens with a story told from 2nd-person perspective of a Solo’s descent into cyberpsychosis as he adds on more and more cyberware, until he’s finally taken down by psycho-squad cop. It’s a well-written article, mimicking literature about treating drug addiction and PTSD. The article reminds readers that replacing lost limbs with body bank organs. It also introduces the possibility of therapy to bring back someone that’s gone over the edge, although there aren’t any rules and there’s an implication that it might ruin your character anyway because you developed depression or now have an aversion to technology.

There are some things about this article that are less than great. One, there’s a suggestion that chipware can trigger at inappropriate times. Not sure what that has to do with Cyberpsychosis, but anything that permits a GM to take over a character Just Because is pretty bad. The second addition is a random table to determine what a character’s cyberpsychosis manifests as. Once a character’s EMP hits two and they start showing symptoms of Cyberpsychosis, there’s only a 30% that the condition manifests as homicidal rage, according to this table. The alternative manifestations are such fun role-playing opportunities as: catatonia, obsession, paranoia, delusions, hyperactivity, phobic, or schizophrenia! “In each of these variations, the eventual result is blind rage against people.” Well then what’s the point? One of the many issues with Humanity Loss rules is that aside from the decrease in EMP, there’s no other consequence to a character until they zero out. There’s no mechanics for a Referee to tell an EMP 2 or 1 metalhead that they’re having an early-stage reaction. To be fair, I don’t think such a system could even be written into either edition of Cyberpunk without it removing agency from a player. Something like Compels from FATE would just be a kludge for an otherwise mechanics-focused game, in my opinion. But it’s still a major gap between the fictional narrative and the mechanics.

Addendum: I feel that I should expand on my opinion of Humanity Loss and Cyberpsychosis. In my review of the core book, I was generally in favor of the mechanic given a few tweaks to implementation. But as I have continued writing these reviews and listening to feedback, I began to feel that my opinion rested on what I thought was the base explanation of Humanity Loss. In my head, the culprit was the connection between a person’s neurons and the electric interface somehow fucks with their head. The culmination of interface after interface eventually wears down their own sense of self, and as a reaction they lash out at any outside stimulus.

Even as I type that reasoning out I feel like there are plenty of holes, but in the end I can accept it as the in-universe justification. The problem is that there isn’t an agreed explanation for Humanity Loss among the writers, to say nothing about the fans. This can be seen in the inconsistency on what types of Cyberware have a high HC, and what can reduce or mitigate loss. One review of CP2020 that I saw on Youtube objected to Humanity Loss when just trying to restore basic functionality. While that might just point to body banks not being well advertised in the rules, it was still informative because it showed how much a different understanding of Humanity Loss can lead to different interpretations of what’s fair and what’s not.

In the end, I think my revised opinion is that while I like the dynamic created with Humanity Loss and Cyberpsychosis, if a group decided to heavily scale back or ditch the mechanic, they won’t be missing anything important.