Hey Rocky! Watch me pull a review out of my hat! 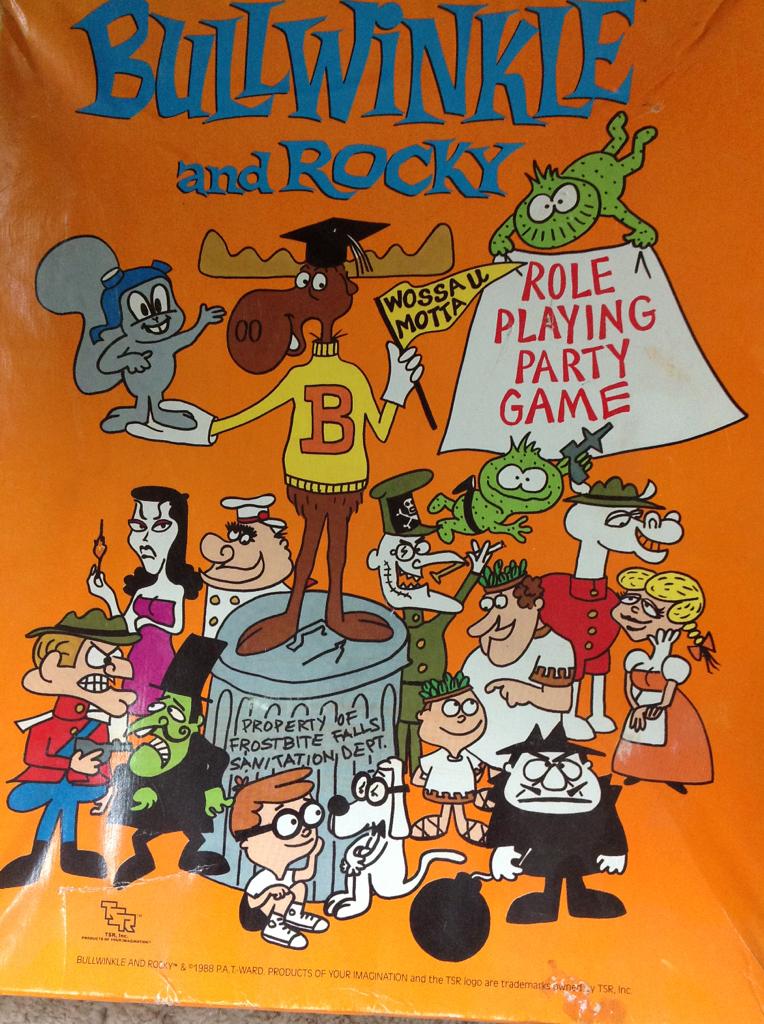 Rocky and Bullwinkle was a fabulous cartoon that aired from 1959 through 1972 and starred Rocket J Squirrel, all American hero and swell guy and his loyal, if somewhat dim friend Bullwinkle Moose, who lived in Frostbite Falls and went around having adventures that mostly resolved themselves via puns. It also had numerous other casts and plotlines ranging from the adventures of Mister Peabody and his boy Sherman, who went on time traveling adventures, to Fractured Fairy Tales, to Dudley Do-Right and his quest to save poor Nell from the clutches of Snidley Whiplash and help make sure the Canadian Mounted Police were never taken seriously by anyone for generations to come.

It obviously then, made sense to make a rules light role playing game targeted at grognards and 12 year old AD&D players in 1988 based on the TV series that had no new episodes for 16 years,and wasn't appearing on Saturday Morning cartoons anymore. Also bear in mind that this was even in a time before a cable channel for every niche, the internet, or the ability to get DVDs of every show ever broadcast. The box contains three rulebooks, six different spinners, a deck of 108 plot item cards, 20 standee full color cardboard cards (note that the cardboard used is almost thicker than the rulebooks), and of course 10 plastic hand puppets. It staggers the mind why TSR wasn't rolling in money selling this $15 box set. 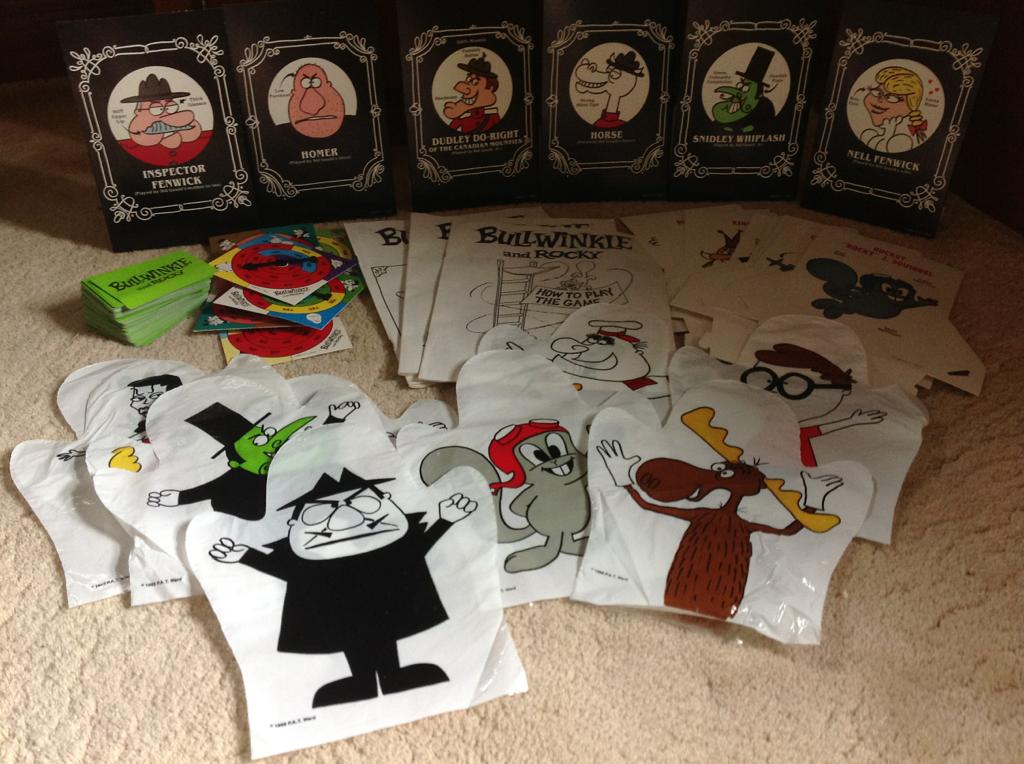 Booklet 1: How to play the game (Read this first or else! --Boris Badinoff)
The rules booklets are written in a light, airy tone and decorated by really poor drawings of Rocky and Bullwinkle talking heads editorializing on the rules presented, or arguing with each other.

After a brief introduction telling you what comes in the box, we start out with Mr. Know-It-All's Guide to Not-Very-Serious Roleplaying. This is the 'basic' version of the game and its introduced as a narration game that exists to tell a story, no winning or losing, just have fun where (and this is exactly how it reads):
"Everyone, man and woman, boy and girl Rocky: What kind of games can you play with girls? Bullwinkle: This really is a kid's show, isn't it? works together to create a story using ideas inspired by the cards in your hand. With each card-each idea-you add a little bit to the story, building it in a round robin fashion."

Ok, on to how to play. You gather your craziest friends, pick a story from the third booklet, the person who picks the story reads aloud The Story So Far and then The Ending, so everyone knows how the story begins and ends. You deal 4 or 5 cards to everyone playing (depending on the number of players present) and then the person who picked the story starter begins telling what happened, by adding in a plot element from one of the cards he drew. Once a player plays a card, the player to the left gets to interrupt at any time and twist the story based on whatever card and whim takes him or her. There should be a connection, however tenuous to the card and the plotline, with an emphasis on going for bad jokes and laughs. In the case of an unusable or uninspiring card, you can simply discard and draw a new one on your turn, using that one instead.

Play ends when everyone is down to one card. You can then choose to keep that card or discard it for a new one. The person who started the story counts to three and on three everyone drops their card in a pile and the one on top gets to finish the story. the winner gets a diploma from Wossamotta U or the Ukrainian Safe-Cracking Institute, both of which I have apparently lost from my set.

The Everybody Can Do Something Game
A more advanced way to play the game, you choose the cartoon you want to play (Rocky and Bullwinkle, Dudley Do-Right, Peabody's Improbable History, etc), and a story starter. Then each person selects a character that can be worked into that sort of story. Grab a standee of the character and a puppet version of the character (if there is one, and if not, you are choosing poorly!) Then you take a spinner that has your character's portrait on it. Share it if you have to, since each has multiple characters on them.

Deal 5 cards and start playing with the puppets. Also read the back of the character card to discover your POWERS! In this version of the game, you act as your character only and tell your story, based on the card and your, for lack of a better word, character sheet, only as that character would act and from that character's perspective.

Now, to add in the complexity, you have your spinner that comes into play under four circumstances. First is if the power on your card says to spin. Second is if you're trying to affect another character. Third is when the Narrator tells you to (they haven't explained what a Narrator is yet, but let you know they'll get to that). and Fourth when you figure there's a good chance what your trying won't succeed and you want the element of randomness.

Its worth noting that each spinner is different. Sme spinners have a lot more chance of a 'no' roll than others, and there are three different 'rings' of yes/no results on the spinner. For example, Boris Badinoff has about a 50% chance for a 'yes' to be spun, while Bullwinkle has about a 25% chance. This proves its always good to be bad. Also, as a rule, you can always choose the bad result from the spinner, particularly if you think it will be funny.

The Narrator for the scene (again, they'll explain who that is later), can also decide at any point to make things worse for a character and is expected to play favorites in this, a narrator who is playing a bad guy is to favor the villains, a narrator playing a hero is to favor the good guys. However, no character can be killed or even seriously injured. "Bombs explode, covering characters in ash or throwing them high in the air. Knives shred clothing, possibly causing personal embarrassment. Bullets cause black, smoking holes in the seat of the pants. That's it. the worst the Narrator can do to a character is send them out of the scene for a while."

Winning. Every character has a goal spelled out in the story description, based on the 'good guy' goal or the 'bad guy' goal. To win, your character has to achieve his goal and play all the cards in his hand. When you play your last card, you have to spin to do anything! When you play your last card and fail to win, you draw more cards, up to your starting number of cards.

Finally, we come to the Narrator. The narrator starts off as the person who picked the story. He gets to set the pace of the story and pick on the other characters until he plays a card, at which point, the person to the left gets the narrator microphone standee.

The third type of game is called the Graduate Game. Basically, you create your own characters, choose what narrative powers you want them to have, choose a spinner and play. Guidelines to making these characters? Of course not! Just make up whatever you like, so long as it amuses your friends, and try to work a pun in there.

Stories are the list of plot starts, ends and character goals referenced above. My next post I'll use them and give an example of play and some powers to show how insane they are.