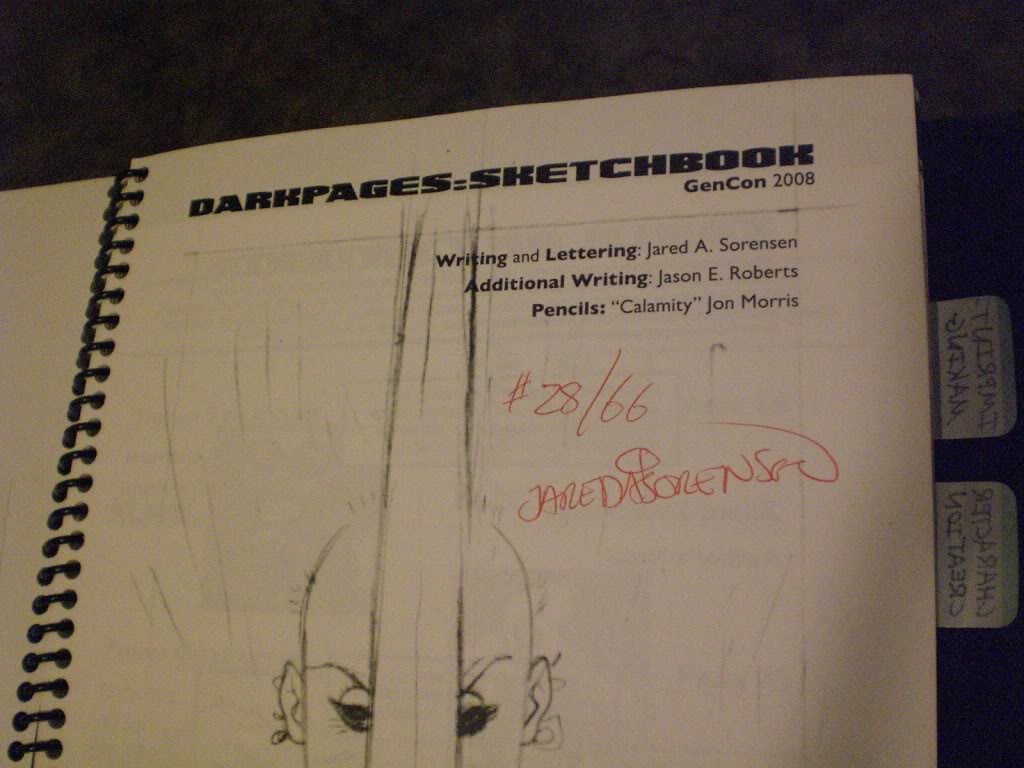 Titles such as Werewolf by Night, Ghost Rider and Dr. Strange broke free of the Comics Code with tales of monsters, kung fu masters, ancient sorcery and hell-spawned demons. In later years, comics writers like Alan Moore (Swamp Thing, Watchmen) and Frank Miller (The Dark Knight Returns) deconstructed the myth of the super-hero and exposed its underbelly...one crawling with sexual dysfunction, violence, nihilism and darkness.


Darkpages is a crime noir & supernatural horror game zipped up into post-deconstruction superhero leathers. It was released in an incomplete spiral-bound 'ashcan' format in 2008 at GenCon, in the hopes that people would play it and then make with the feedback. Memento-mori.com says 60 copies were printed, my signed copy says 66 were printed.

In 2010, Jared Sorensen cancelled the book, which is really too bad because Darkpages had many interesting things going for it, and I wanted to see what a finished version would be like. Apparently no-one was playing the game and sending feedback.

I have some theories about that.

I'll be saving them for later.

The Basics
The game is built for two players and one GM. That's right, two players.

The dice system is d10s rolled in pools that are equal to that you're using to act with; any dice rolling 6+ are 'points', and the player with the most points wins a contested roll. You always roll at least one die even if you're rolling something that's at 0. This die is called the 'wyrd' die to remind you that the game is hip.

Sequences are run with the GM setting up a scene, and everyone contributing. As long as people agree on what's happening, things are good. The things people describe as happening are fixed into panels, the things people leave out are left to the gutter. The gutter gets much love here - it's the space between panels in a comic, where the transition from one state to another occurs and where the dice are rolled. There's a suggestion that one player composes three panels, then passes the torch, but it's not a hard rule.

The book suggests you leave out fiddly and non-visual details, and to talk about the panels you create as if they have Sound Effects and particular shapes, which is kind of interesting! It also suggests not using a whole lot of dialog.

So far a bunch of simple stuff, saying yes or rolling dice, and a bit of slavishness to source. Pretty normal for a comic book/superhero RPG. Even Challenges are a pretty normal 'roll the dice to control the story' get-a-high-score mechanic.

Pain
Pain is a catch-all for emotional, mental and physical stress or damage. Your character takes pain when they violate one of their Codes through action or failure to act in a Challenge, and when they decide to Push Pain to reroll a Challenge they had failed. When you Push Pain, you take the margin of failure as Pain inflicted to your character's own Gutter (confusing re-use of terms!) and you get to add that number of dice to your re-roll with a new motif.

So let's say you rolled your Violence and the GM rolled Corruption, you got 2 points and she got 3. You Push Pain and re-roll with Beauty, taking one Pain and adding a bonus die to the re-roll.

A character also has Marks, which are classified as Shadow, Scar or Spirit. Once per session you can use one of these to screw with incoming failure and/or Pain. A character starts out with just a Shadow, but you don't get to know that until nearer the end of the book, where all the character creation is stuffed.

-Shadow; You get to ignore the Pain from breaking your code
-Scar; You can Push Pain without suffering the margin of failure as Pain (while still getting the sweet bonus)
-Spirit: All 0s can be read as 10 for this roll. You can also use this ability when breaking ties or testing against Pain.

I think it really works like so; your Archetype rating can be anywhere from 1 to 10, though you should choose somewhere between 4-7 so you don't suck ass. If you have a rating 4 Archetype, your pain will exceed your rating pretty quickly in play, so you may as well try to accept it after it hits 5, not when it hits 10 and DESTROYS YOU. Or a loved one. If you have a rating 7 Archetype, you probably want to wait it out because you are an indomitable motherfucker, and you'll likely win against your Pain with a little kickback to your Bonds.

If you fail to make the hurting stop,

you take the margin of failure as damage to your Archetype - it is lowered forever. In a way, this is really cool, because when your Archetype hits 0, your character has to reincarnate. And reincarnation is cool.

Retro-'spective
This game was something I read and re-read and thought about and made character sheets for and was overall enthusiastic about while having no chances to play it. Then it was cancelled and my hopes of getting a complete game to play in the future died. Reading it two years after its cancellation is eye-opening. If anyone wants to see more of the game that got away from the guy who worked on Lacuna, InSpectres and Freemarket, I'll definitely post it.

I'll leave you with an example of all the highlighting I had to do so I could find the rules. 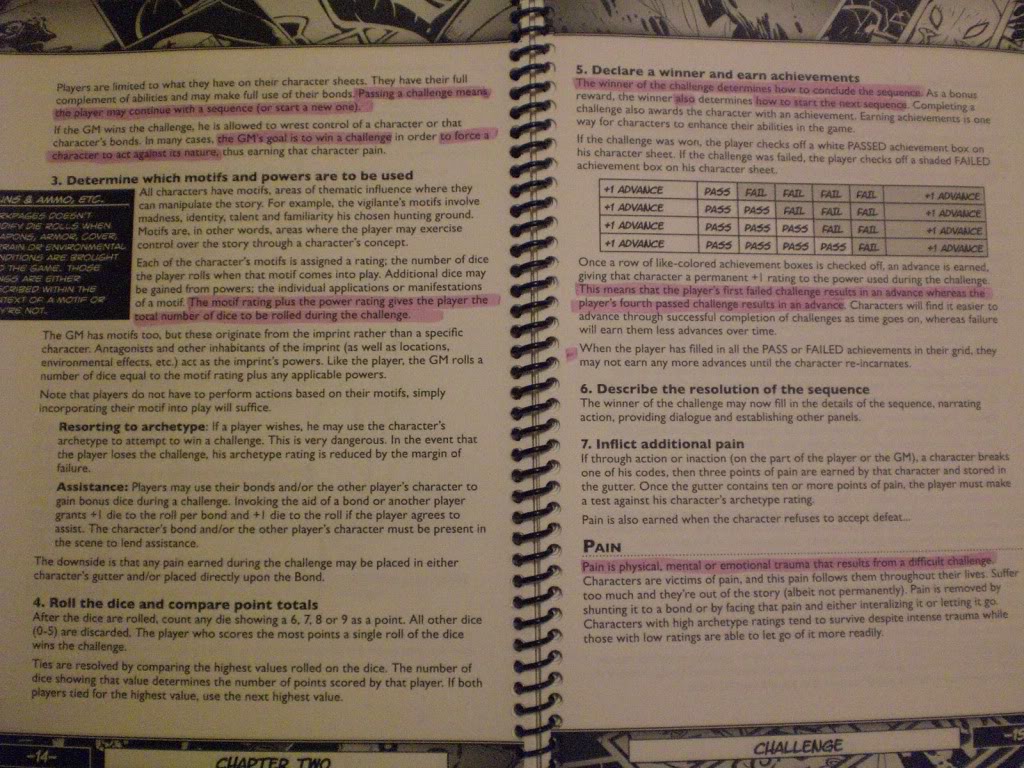 Oof, what an ugly week, I intended to do this sooner. No matter! It's time to get to the actual creative work you need to do to set up and play Darkpages!

Imprints
In comics parlance, an Imprint is a sublabeling created by a publishing company to distinguish it from the main line, to say 'these titles are different from those in setting, theme, characters, or a mix of the above'. The best real-world example is Vertigo and DC; Vertigo has the occasional overlap of characters from DC, but the themes are different, and the settings and continuities of Vertigo titles separate. It gives a company some flexibility.

In Darkpages, an Imprint is essentially a Campaign Setting that you build with rules similar to character creation. It encompasses the background, setting, themes, mood and side characters of the game and its story. Imprints also take damage when the GM loses Challenges , and every ten Pain points

reduces a relevant element of the Imprint by one. If an element is pounded down to -1, it gets replaced by something new.

When you build an Imprint, you make up four different thematically and/or geographically connected spaces and eight characters (one for each Archetype - this is part of the reason why the game is labeled 'for two players', perhaps the bigger part). You get 15 points to distribute among the Imprint's four spaces, each of which can carry a rating from 0 to 10. Each space gets three Elements rated at +0 or one Element rated at +1. We're informed that advances earned by the Imprint and the Adversary/ies are used to add or improve Elements, but I don't think the book ever says how they earn advances - it doesn't say if Imprint advances work the same way as Character advances. If so that's kind of neat and adds some rather organically developing 'life' to an Imprint.

The included imprint, Glassworks, has a good write up and two complete characters for each Section of the imprint. The Imprint as presented by itself, however, doesn't tell you the ratings for each section or the Elements thereof. If I remember correctly, the author made that available on a wiki later (he has since taken the wiki down).

>>>One Trip Through the Wayback Machine Later>>>

Adversaries
Each character is linked to an Adversary who contrasts, foils and otherwise spotlights the character's actions. Not necessarily evil or an enemy, sometimes they're simply rivals and so on. The point is that Adversaries represent goals and obstacles in the character's story.

Adversaries are built just like characters, except that they do not form Bonds, instead they form Nemeses. An Adversary has one PC as a nemesis, and when that PC takes a hit (this isn't specifically defined, taking pain should happen very frequently but testing against it and losing less often...I kind of assume it means the PC tests against pain and loses, with the 'hit' being the loss to their Archetype rating) the Adversary gets to lose Pain equal to the Nemesis rating (how you set the Nemesis rating is not in the book, as far as I can tell).

An Adversary is one of the eight characters available, taking up one of the available archetypes. Once you have two PCs and their foils, that's half the Archetypes used up. If you decide to push it and have three PCs, you only have two available side characters.

You're encouraged to think of the conflict between the character and the adversary as Archetype vs Archetype, for example;

Hermit vs Magician
(did I mention the Archetypes are vaguely Tarot-based?

) The Hermit is introverted and insular, out to protect herself and the few she trusts. The Magician is extroverted and seeks to spread her influence to new places and people.

Next Time; Concepts and Characters! 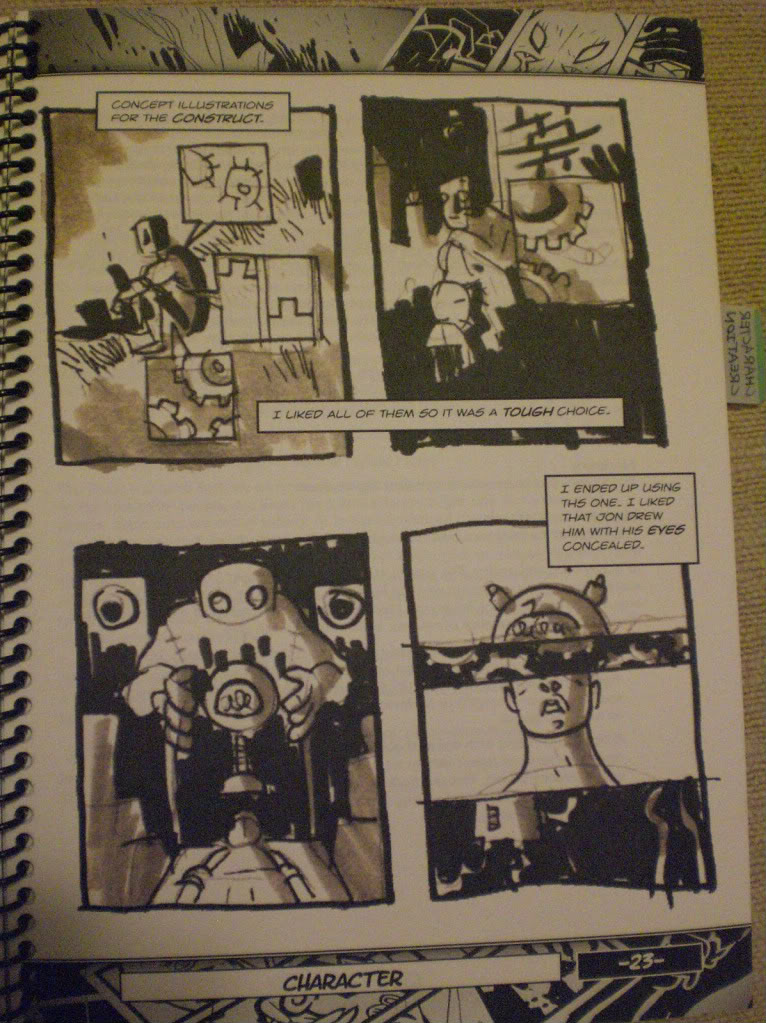