The Savage World of Solomon Kane by Pththya-lyi 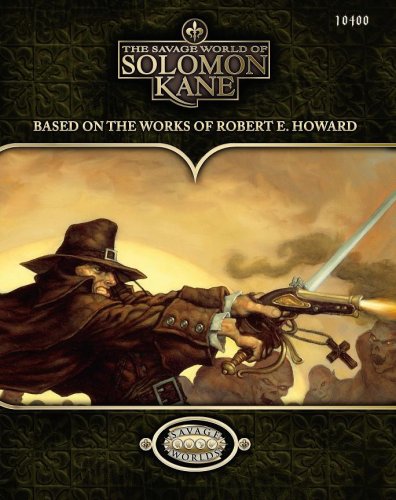 A Landless Man. A Wanderer. A Puritan.

Solomon Kane is many things, but above all, he is a hero. In a time of savagery and horror, he wanders the darkest corners of the Earth and battles the evil he finds hidden within. From the savage interior of Africa to the cold forest of Europe, the frigid mountains of Cathay, and the blood-soaked jungles of South America he battles merciless butchers, deathless queens, and even winged demons in his pursuit of righteous vengeance.

Now your hero can follow the Path of Kane. Whether a Puritan wanderer, a misguided pirate, or a soldier of fortune, a time of legend has come and fate has chosen her champions. Kane began the fight against an ancient evil so great it could destroy humanity, but now others must carry the torch into the darkness.
The Savage World of Solomon Kane is a roleplaying game based upon the incredible works of Robert E. Howard, author of Conan the Barbarian®, Kull the Conqueror®, and countless other great heroes and heroines. Inside this lavishly-illustrated 352 page book are the complete and award-winning Savage Worlds rules customized for Kane’s world, as well as all-new setting and magic rules to capture the spirit of Robert E. Howard’s dark tales. Game Masters will also find terrible creatures and merciless foes drawn from Kane’s own travels—and beyond—as well as dozens of Savage Tales and a ready-to-run Plot PointTM campaign.

Strap on a brace of pistols, sharpen your blade, and steel your mind. You are about to walk the Path of Solomon Kane!


I need to level with you guys.

I love Solomon Kane. He’s my favorite Howard character and I want you all to like him too. BUT I need to tell you that most of Howard’s stories reveal his outdated and prejudiced ideas about women and people of color, and the Kane stories are no exception. N’Longa, Kane’s African shaman “blood brother,” is pretty much a Magical Negro, and he speaks in pidgin English (e.g. “Me pow’rful ju-ju man! Watch now: I work mighty magic.”). The only female character in the stories who’s not a damsel in distress is a freaking vampire queen! Her empire turns out to be an Atlantean outpost that declined largely because the ruling class miscegenated with their slaves! The source material for this is not very politically correct, is what I’m saying. The book has its own way of dealing with the un-PC nature of the source material, and while they definitely did make an effort to make the game more sensitive, they weren’t always successful. I’ll come to the issues as they show up in my read-through. Now, let’s get started!


When we open up the book, we get ourselves some opening fic! In it, we find Kane in a cave, locked in mortal combat against a giant evil snake thing. He kills it (but not before being poisoned), then kills the crazy evil “sorcerer” who summoned it. Then he calls our attention to another character:

”Thank you, my friend,” he called into the shadows of the cavern. “Once again your magic has saved me.” Kane did not profess to understand the ways of ju-ju magic, but instinctively new his old friend, N’Longa, had somehow used his powers to slow the serpent’s venom.

“N’Longa happy to help,” the old shaman smiled, stepping into the light. “You kill snake good, but there many more dangers coming. Bad times move closer. Shadows and scales the future holds.”

Kane’s head slumped to his chest as he reloaded his pistol. “So much evil,” he muttered. “My bones grow older, N’Longa. The road becomes harder to walk.”

N’Longa laughed loudly, his outburst echoing like thunder. “You not old, blood brother! N’Longa many years older than you!”

N’Longa waited until the echoes died down. “But you right,” he added. “Too much darkness for one man. Fear not, I summon others to fight the darkness. Soon they walk path too. Soon they follow the Path of Kane.”


Omigosh he’s talking about us!

*Okay, so he’s not really that much like the real, historical Puritans, but he wears a buckle hat and is pretty righteous, and that’s good enough for our purposes.

We’re going to skip over Chapter One; it’s just a short essay about Kane and what he’s all about, followed by plot summaries of Howard’s stories. You can read the stories on the Internet if you really want to. I want us to start in on Chapter Two, “Characters,” and make you guys a player character. The chapter starts out by explaining that you can play all kinds of characters, not just a Kane clone. Then things start getting a little uncomfortable, political correctness-wise:

What matters is that whatever character you create, he or she is an icon of her type. If you create a zealous Inquisitor, play him as such! Insist on strapping infidels to the rack and forcing confessions from their lips. If you play an American Indian, show his savage and brutal side as well as his nobility. Play your hero to his fullest, and don’t be afraid to be a stereotype—at least on the surface.


I’m a little wary that they gave us “sadistic torturer” and “Noble Savage” as character examples this early, but at least the book doesn’t dwell on them. Instead, they give us a few pages of suggested character concepts. I like the Swordsman archetype:

A swordsman may be a bully or showoff, using his skills for his own ends, or a protector of the weak, willing to lay down his life for a noble and just cause. Some prefer flashy styles, others, like Kane, are functional (yet deadly) in their swordplay.


I decide that our PC’s going to be a brash cavalier type of dude – pretty much this guy right here: 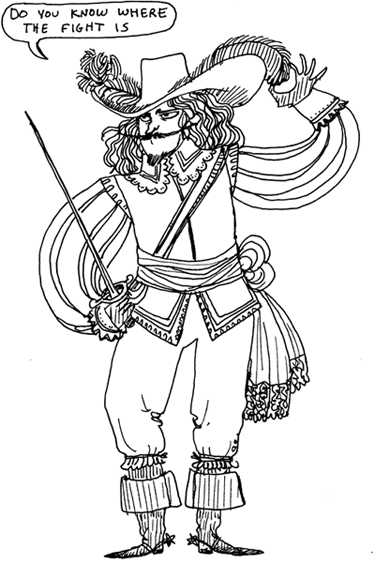 Now we’re going to get to the meat of the character creation process. SWSK uses the Savage World system, which I’m assuming you’re familiar with. (You’re not? You should be, you Philistine!) Our guy is going to start at the lowest character level, or Rank, of Novice. The only race is Human, so our dude gets a sweet, sweet Edge for free. Attributes, Derived Stats, Edges, and Hindrances work in the standard way, and everybody gets £5 with which to buy their starting gear. SWSK adds an extra step to the chargen process, just for that Plot Point campaign the back jacket promised us: The Path of Kane.

. . .[E]very hero has already crossed paths with Solomon Kane and he or she is now considered a “Wanderer.” The time is the early 1600s, and Kane has completed the events detailed in the poem Solomon Kane’s Homecoming. His hair is white now and his skin weathered, but he has lost none of his passion for fighting the good fight.


The player just needs to decide how her PC and Kane met. It could have been last week, it could have been decades ago. The PC could be somebody Kane rescued, someone he fought beside (or against!), or just a bystander who was impressed by Kane’s righteous badassery. At some point after this, N’Longa started visiting the PC in her dreams and nudged her towards Devon, England, onto the plot rails.

If your character wouldn’t willingly follow N’Longa’s urgings, he was eventually forced here by terrible nightmares, sleepless nights, and incredible runs of supernaturally bad luck. These ill omens cease only when you finally follow the ju-ju man’s direction—though your actions remain free to you otherwise.


Never fear, GMs! You don’t have to have a mature discussion with an uncooperative player about his behavior and the expectations of the campaign! Just use N’Longa as the instrument of your passive-aggressive dickery!

The book does go on to say that “N’Longa’s black magic will lead your adventurer to be in certain places, but it will never force him to act. That is up to you and how you want to roleplay your Wanderer,” but you just know that some jerk GM is going to ignore all that. Anyway, I decide that our swordsman met Kane about five years ago, when he arrogantly challenged the Puritan to a duel. After Kane kicked him to the curb, our hero was humbled by the experience and resolved that, even if he didn’t actively fight for justice and good, he’d at least not be a jerk. He followed the dreams N’Longa sent somewhat reluctantly – he doesn’t particularly like the idea of risking his life, but if it means saving humanity….

This is getting a little long, so I’m going to save the actual character creation for the next post. In the meantime, I’d like you goons to suggest some good names for our PC. I’d prefer it if the name were very, very British.