Buck Rogers in the XXV Century by Project1

So this took a little longer to start than expected, but here now for your reading pleasure is the Buck Rogers XXVc RPG. I don't want to get bogged down in the “real world” details of the game, especially since there is some controversy which I'm in no position to comment on, but I'll give a brief history so that you know a little about where the game comes from.

Originally, Buck Rogers was the hero of a couple of novels written back in 1928. This caught the eye of John F. Dille, who teamed the author up with an artist to make a comic strip series, which you can read here . It's also been made into various other forms such as a radio show, a theatre series made in the 30s which you can watch here , and the most famous incarnation, the 70s TV show which you can see the pilot of here . Dille's family owns the rights to the setting to this day. This family includes Flint Dille and Lorraine Williams , who you may have heard of if you're familiar with TSR. Depending on who you ask, Williams either wanted to bring Buck Rogers to a new generation of nerds, or wanted to cash in on the intellectual property she was sitting on.

Like every other version, XXVc has our man Buck being frozen some time in the 20th Century, only to be awakened in the 25th to aid the plucky but disorganised Earthlings against their oppressors. In the original novels and comics it was the yellow hordes (seriously), then the theatre show had the more acceptable organised criminals, then the TV show had the Evil Empire, and now he battles RAM (Russo-American Mercantile), the Evil Corporation, who are based on the partially terraformed Mars. Other groups who might get involved include pirates, the isolationist Lunarians, the theocratic Venusians, and the fabulously wealthy and tasteless Mercurians.

In the box set of Buck Rogers XXVc , we have several documents. There is the Characters & Combat book, which explains the rules, how to make characters, and so forth. There is The World Book which goes into details about each of the inhabited worlds, moons and asteroids, explains how various legal and mercantile systems work, how the settings AIs work, and more. There is The Technology Book , which shows the setting's high-tech gadgets and concepts, such as terraforming, arcologies, orbital colonies, and space elevators. Also in this book are the weaponry, armour, and other types of personal effects. Also included in the box are the cardboard counters and maps for ship battles, maps of various ship types, a map of the solar system, a map of Tycho spaceport on the moon, and quick reference cards for important NPCs, ships, and planets. Of course, there is also the GM screen which contains important information such as THAC0, weapon damage, saving throws for the various races, and information relating to ship combat. 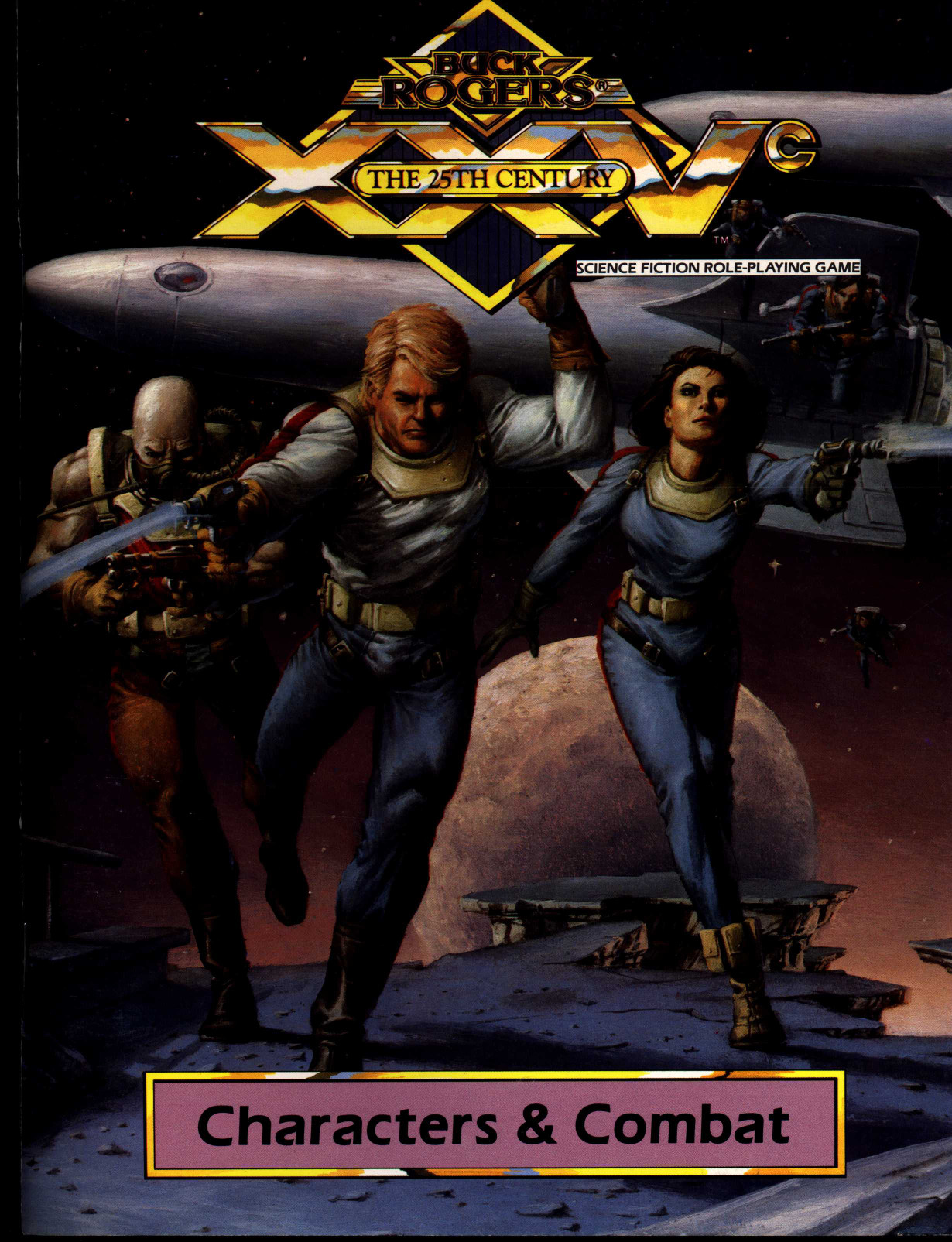 The book opens with a scene: Flint, the young but experienced smuggler strides down the gangplank of the Lady Jane on to the asteroid Ceres. As long as you don't ask questions, Flint will transport any cargo any place, for the right price. The Martian blockade was no match for him, and now he is to meet his contact in NEO, the terrorists freedom fighters who want to liberate Earth from RAM. But wait! Laser beams scorch the air! Two RAM agents are attacking! What will become of Flint, and more importantly, the cargo? 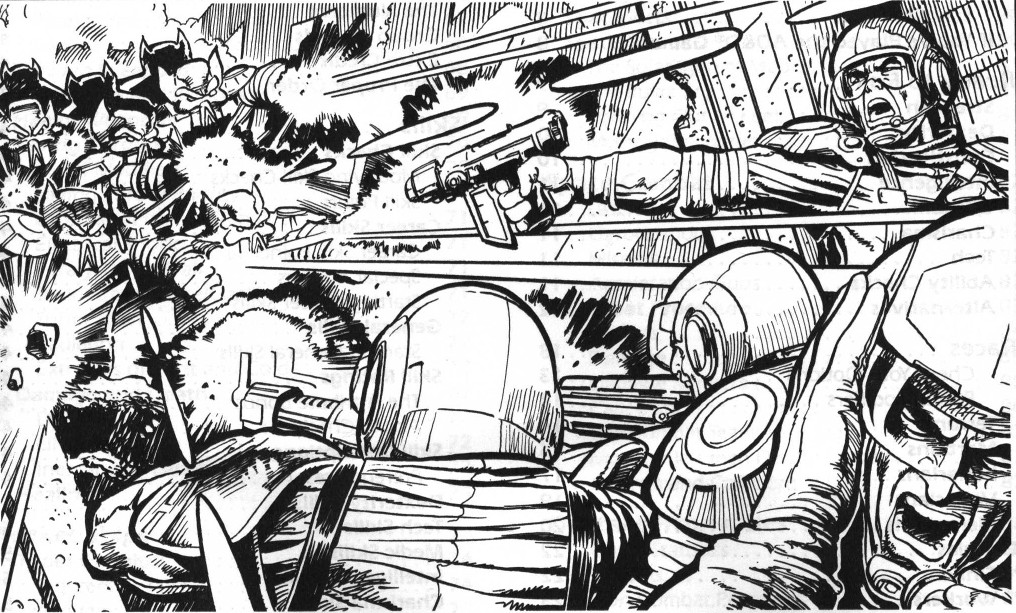 And suddenly there was a terrible roar all around us and space was full of what looked like huge bats, all swooping and screeching and diving around the ship, which was going about a hundred miles a second with the airlock open to Jupiter.

Next is a quick idea of how things stand. It is 2456, and Mars and Venus have been terraformed, Jupiter has floating colonies in the upper atmosphere, and the asteroids have been hollowed out for their own colonies. Not all is well, however, as pirates attack ships, RAM wants to take over the solar system, and scientists create new genetic monstrosities every day. Rocket ships zoom through space, heroes assault enemy fortresses, and villains charm their way into positions of power while their jackbooted thugs crush all opposition. It's an exciting time!

We then have the usual “What is a Role-Playing game section?”, followed by an interesting CYOA section to get you into the swing of things. Or at least it would be if it weren't a good example of railroady, adversarial GMing. You take on the role of Flint, above, as he tries to get the cargo to NEO. Don't try to run from RAM, or you'll get shot in the back. Don't try to reason with RAM, or they'll pretend to make a deal, and then shoot you in the back. Better fight it out, but at least the fight is easy. Next is meeting the contact in a public place (the bar). But is it the grizzled spaceman, or the sexy young lady? Don't talk to the girl, or you'll be poisoned and robbed. Better talk to the spaceman.

“It's a disguise. I'm not stupid enough to openly walk around where RAM agents can randomly attack me as I leave my ship.”

Then we have explanations of GMs, players, dice, and AD&D 2e which this game is based on. If you don't know what AD&D 2e is, you can see the rules here , because I'm not explaining them. BRXXVc has the usual stats, plus one extra: Tech. Tech lets you work with machines, but it's also useful for doctors, scientists and medics. You can generate stats by 3d6 down the line, but at GM's discretion you might have 4d6 down the line, the best of 12 3d6s assigned where you want, or add 1d6 to 10 for each stat which means that you'll be able to join most careers but will otherwise likely be fairly mediocre.

The races are, of course, not the same as AD&D. Your first choice is whether you're a human, or a gennie. Gennie is short for “genetic mutant”, but despite the name they're usually grown intentionally in a lab rather than accidentally in hostile environments like radiation. There are several strains of humans, also.

Next : Races and careers (classes).