The Great Ork Gods by ProfessorProf

You're Green, You're Ugly, and the Gods Hate You 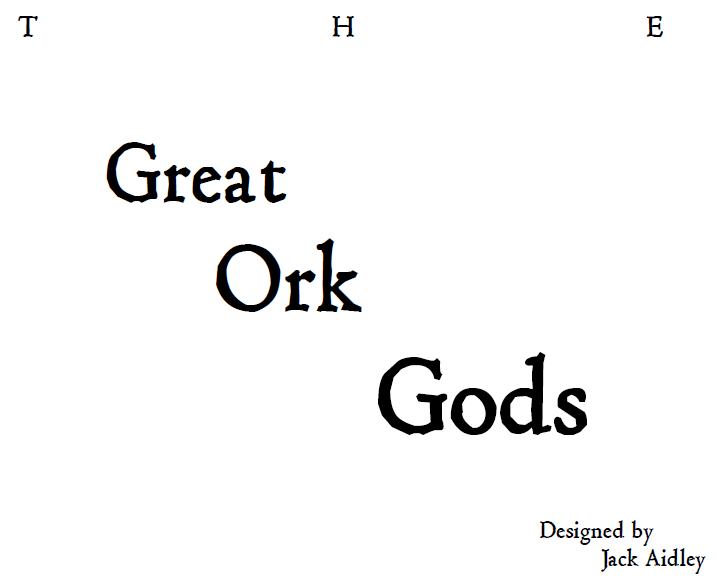 Great Ork Gods, Part 1: You're Green, You're Ugly, and the Gods Hate You

Great Ork Gods is a free indie RPG from 2004, and the system responsible for one of the best oneshots it was ever my priviledge to be a part of. Technically, it's just a preview of a final release, but the last update on the blog was in 2007, so I'm pretty sure that the preview release is all we're ever going to get. It is a comedic game about being stupid, ugly Orks, being as mean as possible, dying repeatedly, and killing your friends whenever it's even slightly beneficial or hilarious to do so.

The basic setup goes like this: First, you make an Ork. Chargen is dead simple, and should take a few seconds on the outside. In fact, you actually get stat penalties if you take more than ten minutes to finish making your Ork. An Ork character sheet consists of a name, an amount of Oog, and seven numbers pertaining to the titular Great Ork Gods.

You see, the race of Orks is ruled by seven mighty Gods, and the Gods hate the Orks. Your attributes, rather than being physical descriptors, are measurements of how much each God hates you. The higher the stat, the more likely you are to fuck up at things related to that God's domain.

This is where it gets amazing: The players are playing not just the Orks, but also the Gods.

Once Orks are made, the players distribute the seven Great Ork Gods amongst the party, and then they get to play those Gods in addition to their Ork. If you, for instance, want to kill a human guard with an axe, then you need to appeal to the Great Ork God Slashings and Slayings , and the player controlling that God gets to - in character - decide, through divine mandate, how difficult your task is.

In the unlikely even that you should actually succeed at something, all this does is make the Gods hate you even more. Successful rolls against a God's domain allow that God to accumulate Spite points, which can be spent at the cruel whims of the players to make any roll more difficult at any time.

For an Ork, life is almost as unfair as it is brief. Most players are going to go through three or more Orks in a single session. The goal is not to work together as a valiant party - it's to be as Ork-like as you possibly can, and die in the funniest way possible.

There are seven Great Ork Gods that govern the lives of the Ork races! 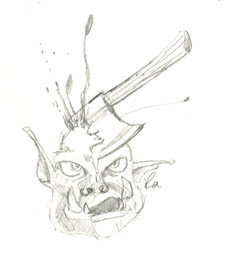 Sneakings and Peekings: God of Stealth. If you want to get through any situation by not being seen, pray to this God, and hope that you get lucky.

All right, we've got us a stat block. Stat attribution is either random, or extremely random. For normal random, roll 18+1d6, and distribute that many points of Hate between the seven Gods, each value being somewhere between 2 and 5. For extremely random, roll three d10s for each God - your Hate value for that God is two, plus one for each die that came up three or less. Roll in order, oldest school style.

Going random just now, I get this:

Not a very exciting statline! Groork is going to have trouble with using anything more complex than a spear or trying to not fall on his face, because the Gods responsible for those tasks hate him even more than usual. High numbers are bad.

Finally, set your Oog at 1. Oog is how much of a big name you are in the Orking community - it's glory and infamy and stupidity and score. It doesn't actually DO very much, but you should play as if its the most important thing in the universe. Such is the way of the Ork.

But wait! We're not done yet. We've created our Orks, but there are still the God to distribute, as the PCs will be playing them as well.

The game comes with a PDF with seven God Cards that you can print out, which look like this: 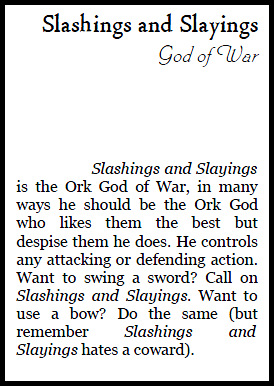 Print out the cards, shuffle them, and lay them out in a line, face down on the table. Players roll off for picking order, and then you turn over a number of cards, starting from the left, equal to the number of players. In order, each player picks one of the face-up god cards to be their own. When they do, they add one Spite token to each God card to the left of the one they picked. If the God card they picked had any Spite tokens on it, they get to keep those. Then, they turn the next face-down card over and the next player repeats the process until all seven Gods have been assigned.

With all that in place, it's time to actually do things! Let's say, for an example, that Groork has been hit about the head with an enormous rock, and we want to know if he's going to die or not. Grook's player will now appeal to the player who has That Which Guards The Gate, to see how hard it is for him to survive. That Which Guards The Gate can come to one of three decisions: Easy (one die), Medium (two dice), or Hard (3 dice). If the same player controls Groork and That Which Guards the Gate, the task is automatically set to Easy.

This would be a complete rule set if the Ork Gods weren't vindictive petty assholes. As it is, there's still Spite to consider! After the difficulty of the task has been determined, any player may spend Spite 1-for-1 to add extra dice to the challenge. So, if That Which Guards The Gate rules that this is a Medium trial, the player with Flailing of Limbs feels like it, they could spend 3 Spite to raise it to a 5-dice challenge. The only ways to gain Spite are to start with it, or for an Ork to succeed at something. If an Ork succeeds at a roll, the player controlling the God that that roll was made against gains one Spite. If a player attempts to protest the difficulty level he is given, then he can get his way, but the God that he protested against gains 2 Spite for each level that the difficulty is lowered. If an Ork succeeds a roll made against a God controlled by the same player as that Ork, then every OTHER player gets one point of Spite.

Roll the number of ten-sided dice determined through this process. If any of the dice come up less than or equal to your Hate from the relevant God, you fail. Grook, in our example, rolls 5d10, and gets 2, 7, 2, 5, 6 - both 2's are lower than his Hate of 3, so he fails, dying instantly. Time to roll up a new Ork.

Let me quote the rulebook directly on the subject of moral issues.

Each God has an associated domain of tasks. If you're fighting someone, you use Slashings and Slayings. If you're sneaking, you use Sneakings and Peakings. However, a creative player may be able to come up with a way to shift a roll to a different God - for instance, instead of fighting the enemy halfling with his axe, picking him up and throwing him into a lake, shifting from Slashings and Slayings to Lifting Stone, Pounding Rock.

This should generally be allowed, as it makes things funnier and more interesting. However, under no circumstances can a player shift a roll from a God they don't control to a God they do. If a Stunt is refused for whatever reason, then the Ork must make two rolls - one for the regular effect, and one for the special effect they hoped to achieve. So, in this case, the Ork would have to appeal to both Slashings and Slayings and Lifting Stone, Pounding Rock.

Oog! Oog is everything to an Ork, and the goal of any Great Ork Gods adventure is to acquire as much Oog as possible. Oog begins at 1 every time you roll a new Ork, and can be acquired in two ways. The first is by killing your fellow Orks - Every time you kill an Ork with more Oog than you, you gain one Oog.

The second is by accomplishing the objectives set by the GM for the adventure. In the sample adventure given in the book, the Orks are raiding an idyllic village in order to kidnap the mayor's three daughters. If the Orks succeed at capturing the daughters, then each Ork gains 2 Oog... however, for each daughter an Ork kills, he gains 1 Oog, for a total of 3. The correct course of action should be obvious.

Oog does actually do one thing! It allows an Ork to expand his retinue of Goblins . 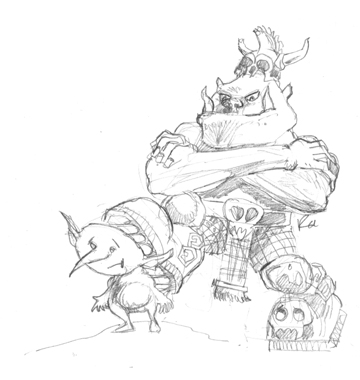 Each Ork starts with a single goblin, and gains one additional goblin underling every time they gain a point of Oog. Goblins can be used as a resource to make your tasks easier, but only if the goblin dies. The player must describe a way in which killing or sacrificing a goblin allows them to more easily accomplish their task. The goblin is expended, and either the difficulty of the task is reduced to Easy, or one point of Spite is neutralized.

Outside of sacrificing them to make rolls easier, an Ork can generally order goblins around. Your goblins will do whatever you tell them to (although they will follow your orders extremely poorly), unless another Ork with a higher Oog than you gives them a contradictory order. Using goblins like this is rarely actually useful, but it IS funny.

In the bizarre event that you want to keep a Great Ork Gods game running for more than a single session, keep your Orks, but redistribute the Gods at the beginning of each session. Each time an Ork survives to the end of a session, it gains one additional point of Hate for the god of your choice.

This is pretty much all there is to Great Ork Gods. It's a simple game, but a fun one, and I can't recommend it highly enough if you can find a group with the right Orktacular mindset for it.

Next, I'll do a writeup of a game that is more or less the exact opposite of this.