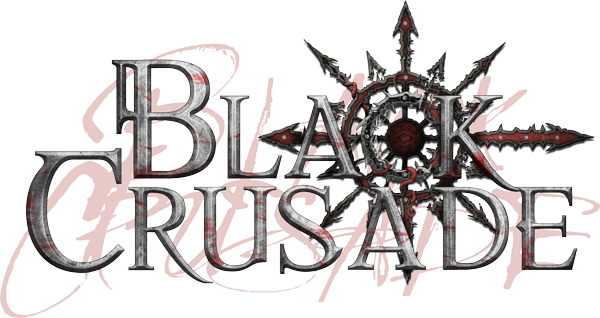 Grabbed from FFG, so copyright GW and/or FFG.

Warhammer Fantasy and 40,000 (“40K”) have been around as miniatures wargaming lines since the 80s, but oddly enough the futuristic (and notoriously “grimdark”) 40K line never received a tabletop roleplay option until relatively recently. So it was something of a surprise that in 2008, Games Workshop’s Black Industries label actually published Dark Heresy, wherein the player characters are henchmen of the Inquisition trying to stomp out heresy in the Imperium of Man. The system itself was based on the older editions of Warhammer Fantasy Roleplay ( WFRP 3E is a wholly different beast) and received at least moderate success for a TRPG. Shortly after its publication Games Workshop decided to discontinue publishing the Dark Heresy line, but this wasn’t the end for the game itself as Fantasy Flight Games picked up the rights to publish it under a license they’ve held since then.

Given the header image, I’ll be showing off Black Crusade for F&F for two reasons. First, out of all the 40K TRPG lines Black Crusade is probably the one that least bothers itself with the standard grimdark tone of the setting. Player characters are encouraged to be over-the-top

and revel in it in order to gain more precious Infamy. Second (and more personally), I’ve been GMing in-person for five people and I’ve felt obligated to share insights on the matter.

Next time: An introduction to the setting and to the basic mechanics.