Mutant Chronicles is a roleplaying game orginially developed by the Swedish company Äventyrsspel (Adventure games), which later became Target Games, which later became Paradox Entertainment, which is now apparently called Cabinet Entertainment and is a completely separate entity from Paradox Interactive (known for its computer games about drawing pretty maps).

Mutant Chronicles is the first, last and only Swedish RPG to become a true international franchise. It was translated into various languages – notably English - and it spawned card games, board games, miniature games, video games, novels, comics and a movie. Target Games released two editions of the RPG, the first one in 1993 and the second (a minor revision) in 1997. Between 2006 and 2010 Swedish “company” COG Games were developing a 3rd edition, but failed to deliver any product. In 2015, British company Modiphius released the official 3rd edition. 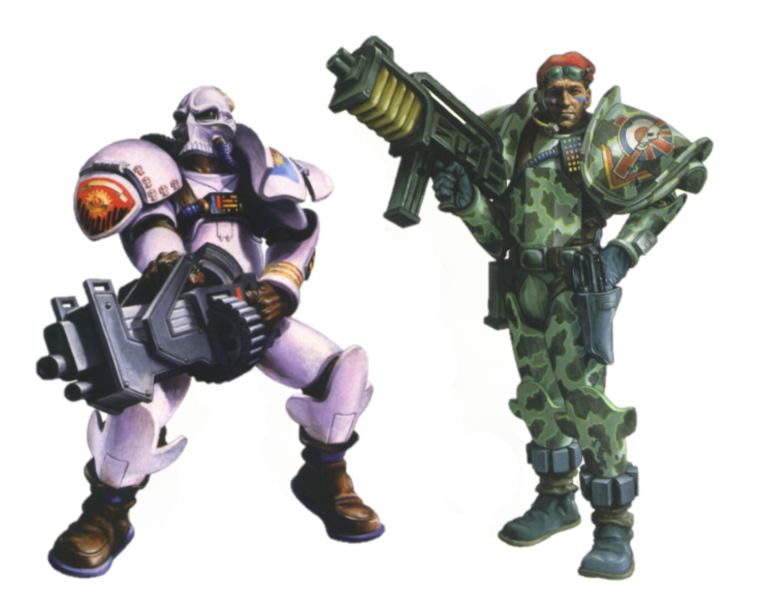 So what is Mutant Chronicles? Well, it’s a complete mess of different ideas and concepts, badly implemented and poorly written, wrapped in a package of colourful imagery, cool names and pictures of big, burly soldiers with huge guns and even huger pauldrons.
It is a roleplaying game set about 1500 years into the future, when mankind, ruled by a few massive megacorporations, has colonized the inner solar system. Technology has regressed to a WWII level (Except you also have spaceships, plasma weapons and mechs. It’s a mess, ok?), and the corporations are feudal empires ruled by noble families. The megacorporations are engaged in an endless war not only against each other, but also against an invading supernatural force called the Dark Legion – an army of mutants and monsters led by five Dark Apostles, each representing some dark aspect of humanity. Against this Darkness stands the Brotherhood, a Chatolic Church stand-in with a penchant for chainsaws and flamethrowers, mankind’s spiritual leaders and only recognized religion, led by the immortal Cardinal.

If this sounds like Warhammer 40.00 with some cyberpunk awkwardly jammed into it – well, that’s because it is. 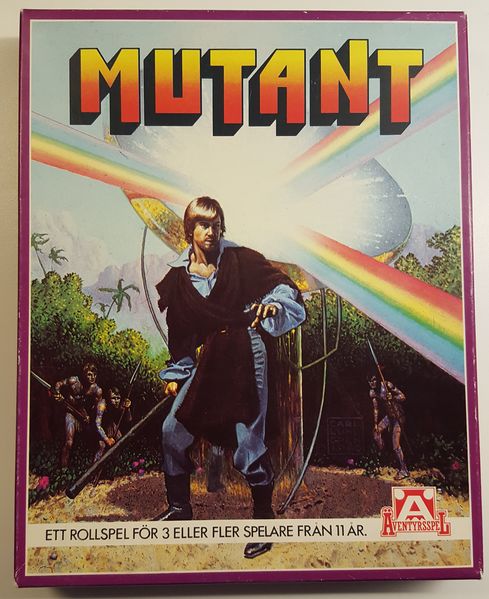 Cover of Mutant 1st ed. Apparently a game about rainbows and clubbing savages on a tropical island.

To understand the setting of Mutant Chronicles, we have to understand where it comes from. In 1984, Äventyrsspel published an RPG called Mutant, with a largely undefined post-apocalyptic setting similar to Gamma World. In 1986 they published Mutant 2, with a more defined setting - a Mad Max post-apocalyptic Scandinavia ruled by mutants and savages, where the hi-tech of the old world was rare.
However, in 1989 Äventyrsspel released a new game confusingly also called Mutant. The rules were similar to those of its predecessors, but now the setting was a Judge Dredd meets Cyberpunk kinda deal – nuclear war has come and gone, leaving a handful of corporate-ruled megacities separated by a dangerous wasteland filled with mutated monsters. 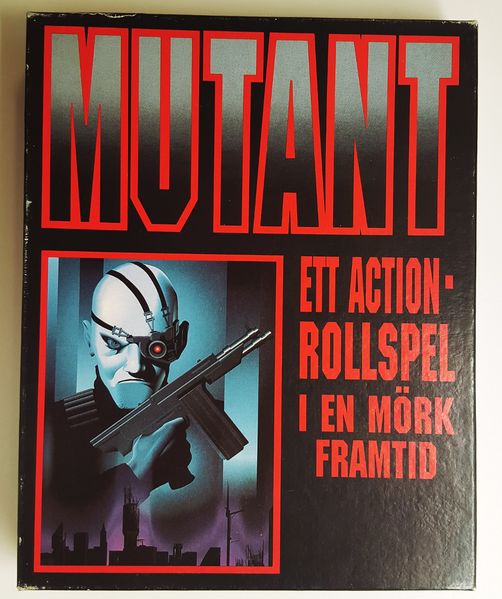 Cover of New Mutant. This guy disaproves of rainbows.

Äventyrsspel would keep releasing new content for this New Mutant at a steady pace - supplements describing new technology, professions, the megacities of Berlin, Paris, Shanghai etc. One plot-point of this setting was that there had been off-world colonies, but that all contact with them had been lost following the war. In 1991, Äventyrsspel teased in their official magazine Sinkadus that they were in the process of developing a new supplement for New Mutant, one called Noll G (Zero G), which would describe what had happened to the lost space colonies, as well as give details on a mysterious group called the Brotherhood who were fighting an even more mysterious force called the Darkness.

Noll G never released, but Sinkadus would keep publishing articles about its contents, describing the various megacorporations running the solar system, the creatures of the Darkness, various warzones and so on. These articles showed what was very much a work in progress, but would eventually coalesce into a more coherent setting – Mutant R.Y.M.D. (“rymd” being swedish for “space”. Why the periods, denoting an acronym? It’s a mess, ok?) Worth noting is that at around the same time, Äventyrsspel published Kult, a Hellraiser-esque horror RPG. In conjunction with this Sinkadus published an article detailing how to combine the supernatural setting of Kult with that of New Mutant. Many of the monsters and demons described in Kult would be copied over into the nascent Mutant R.Y.M.D., appearing as creatures of the Darkness. 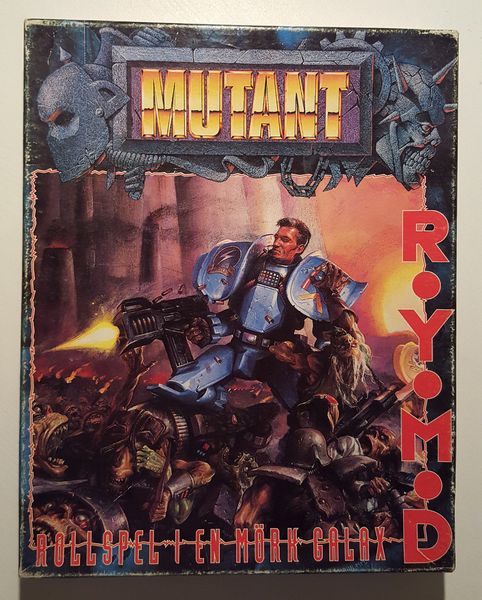 Cover of Mutant R.Y.M.D. This guy can't raise his arms.

In 1992, Mutant R.Y.M.D. was released as a standalone RPG, and it was in all respects similar to Äventyrsspel’s previous releases – it released as a boxed game, containing two books (one for rules, one for setting), character sheets and a handful of multisided dice. The books were sparsely illustrated in black and white, with the only colour illustration being the box cover. The rules were identical to those of New Mutant, with the same skills and classes (including the possibility to play as a mutant or android), with only the addition of a “Member of the Brotherhood” and a “Dark Agent” class. Much of the text describing the setting was basically copy-pasted from New Mutant.

The setting was eerily similar to what would eventually become Mutant Chronicles, but with some striking or bizarre differences. There are the same five megacorporations, each one not only a corporation but a culture, supplanting previous nation states. Earth’s moon, called Luna, is the spiritual and economical heart of the solar system. There’s the Cartel (the UN of the megacorporations) the Brotherhood and the Evil (which would eventually become the Darkness or the Dark Legion in Mutant Chronicles). But Mutant R.Y.M.D. is explicitly set in 2192 AD. The technology is similar to that of New Mutant, with robots, computers, laser and plasma weapons etc. Earth is still colonized by the megacorporations, though it is considered a backwater. And every planet out to Pluto is terraformed. Yes, every planet. Including the gas giants. There’s like, lakes on Mercury and continents floating on top of the lower gas layers of Jupiter. The writing veers wildly from competent and realistic in some places, to outright silly and childish in others – the Grand Master, the Brotherhood’s genetically engineered super-genius ruler (precursor to what would become the Cardinal in Mutant Chronicles) is literally described thusly: “He looks like a three-year-old in a bathtub with a giant head with a lot of tubes going into it”.

Mutant R.Y.M.D. was the epitome of bizarre shit published by Äventyrsspel, and also the last old-school RPG they’d ever produce. Only one supplement was ever released for it – the standalone adventure “Operation Kirkwood”. Strangely enough, a handful of pewter miniatures were produced by Heartbreaker for Mutant R.Y.M.D. I say strange, because neither Mutant R.Y.M.D. nor any of Äventyrsspel’s previous games lent themselves well to being played with miniatures.

Both “Operation Kirkwood” and the Heartbreaker miniatures were released not bearing the simplistic Mutant R.Y.M.D. logo, but rather a more elaborate one saying “MUTANT” with a tiny, tiny “CHRONICLES” underneath. Something was happening behind the scenes... 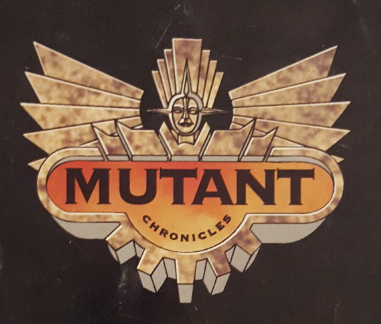 Next – Mutant Chronicles burst forth from the corpse of Mutant R.Y.M.D. like a fucked up xenomorph with huge pauldrons. 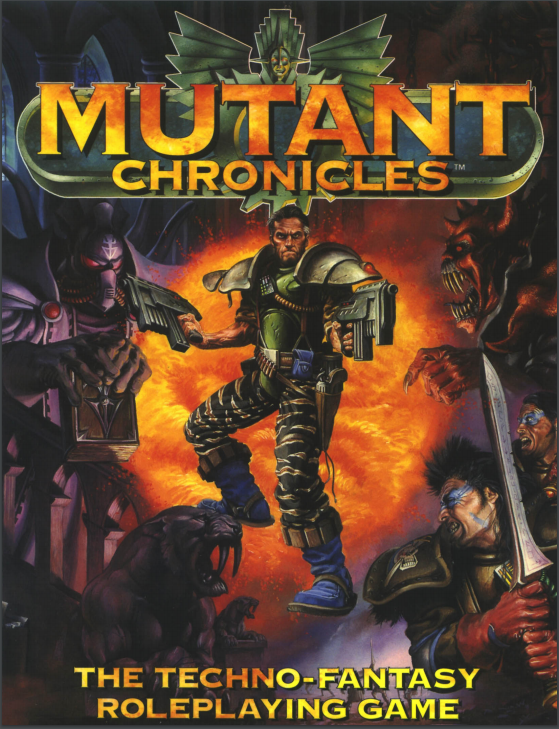 In 1992, Äventyrsspel release Mutant Chronicles. It is 10% Mutant R.Y.M.D., and 90% coke-fueled marketing madness. No more boxed game bullshit - Mutant Chronicles releases as a single beast of a book, clocking in at 206 pages. It is hard to overstate just how much of a commercial product Mutant Chronicles is compared to all of Äventyrsspel’s previous releases. While the writing might only have improved marginally over that of Mutant R.Y.M.D., there’s a fuckton more of it. More importantly, the book is just drowning in illustrations. Where Mutant R.Y.M.D. had maybe one measly black-and-white illustration every five pages, there’s not a single page in the Mutant Chronicles core book without an illustration, and most pages have multiple. Dozens of high quality colour illustrations are scattered throughout the book. There’s been honest-to-god graphic designers involved in the layout of the book. There’s graphical sidebars and dividers and symbols, turning the mind-numbing, endless three columns of black text on white background of previous Äventyrsspel games into a smooth, professionally designed product. 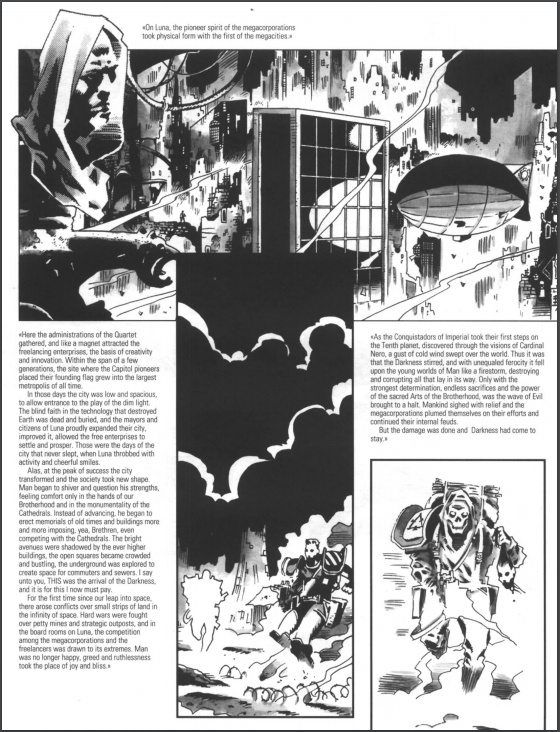 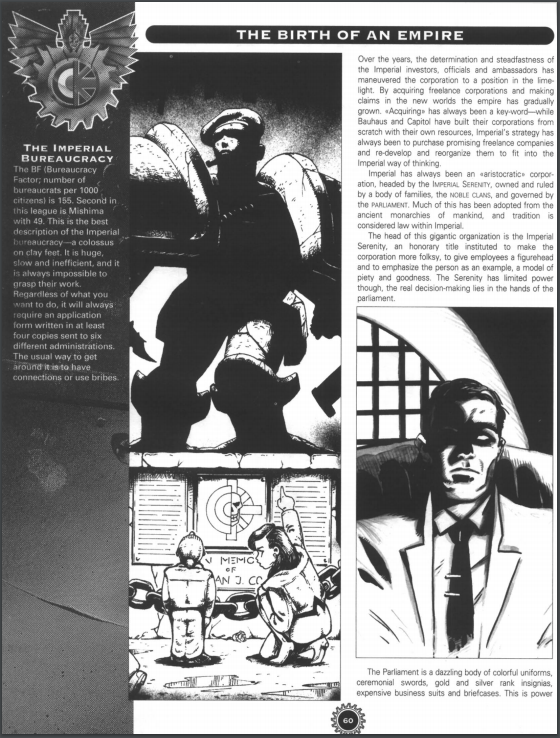 Just look at this shit. More illustrations than actual text

If you’re just leafing through the book, what will pop out like a punch to the face is Paul Bonner’s colour illustrations of megacorporate soldiers and Dark Legion monsters. While these are the most extravagant examples, the illustrations throughout are overwhelmingly of war, weapons, soldiers and supernatural monstrosities. The last 25 pages of the book are just a long list of weapons, each meticulously illustrated. 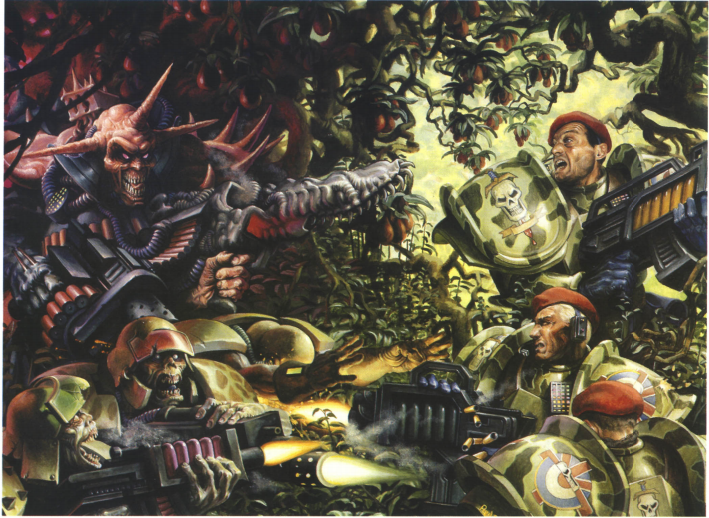 The Battle of Pauldron Hill, by Paul Bonner Esq. 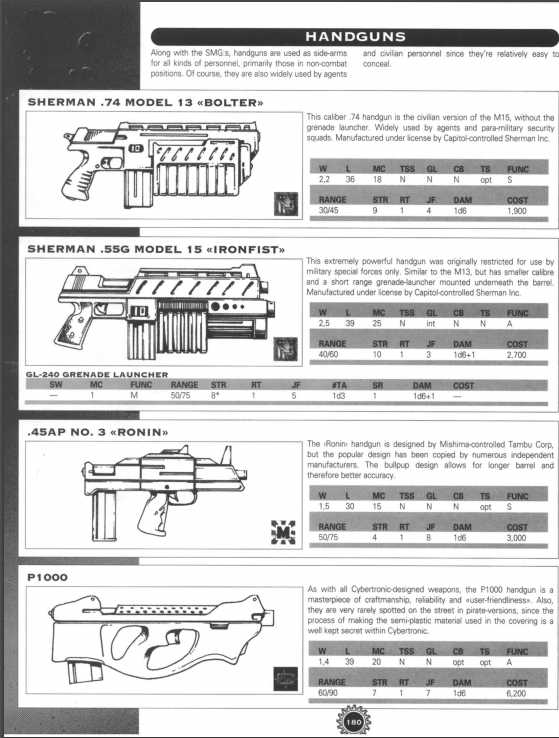 Looking back at Mutant Chronicles now, with almost 30 years of hindsight, it’s pretty obvious that most of this was just Äventyrsspel throwing everything they had at the wall. The setting was largely nonsensical and incoherent. The layout of the text is disorganized. The rules are clumsy and quite obviously not playtested at all. The majority of the illustrations are just incomplete sketches or have no connection to the text on the page. Some are straight up lifted from Mutant R.Y.M.D. or New Mutant, showing stuff like hover cars and computers in a setting that very explicitly does not have neither hover cars nor computers.

It is also obvious that Äventyrsspel was aiming to build a franchise out of this, The Siege of the Citadel board game, for example, was very obviously in development prior to the release of Mutant Chronicles. Many of the colour illustrations in the Mutant Chronicles core book were of the characters and equipment that would later show up in the not-yet-released board game, while some black-and-white illustrations from the board game’s rule book are found scattered throughout Mutant Chronicle’s rules section – showing stuff like personal teleporters, hackable security systems and medic robots, things that clearly did not exist in the Mutant Chronicles setting but might have in the previous Mutant R.Y.M.D.

Somewhere between hatching the idea for Noll G and the release of Mutant R.Y.M.D., someone at Äventyrsspel had sat down, thought long and hard about how the fuck Games Workshop was making such a killing selling nerd stuff, and arrived at the answer “Style over substance, every day of the week”. The Mutant Chronicles core book was tailor made for hijacking the minds of 13-year-old boys.

Speaking as one of those 13-year-old boys, encountering Mutant Chronicles back in the early 90s was wild. I had seen role playing games before, boxes or booklets with nonsensical covers and filled with boring text, lurking in the back shelves of the local toy store. Then one day there was this huge book crowding out everything else on the shelf, and to a young impressionable Mr. Sunshine opening it up was an acid trip of guns and giant pauldrons. I nagged my parents to get me Mutant Chronicles for Christmas. They fucked up and got me New Mutant instead.

Next – What is this game about, actually?