In Nomine: Liber Castellorum: The Book of Tethers by Mors Rattus 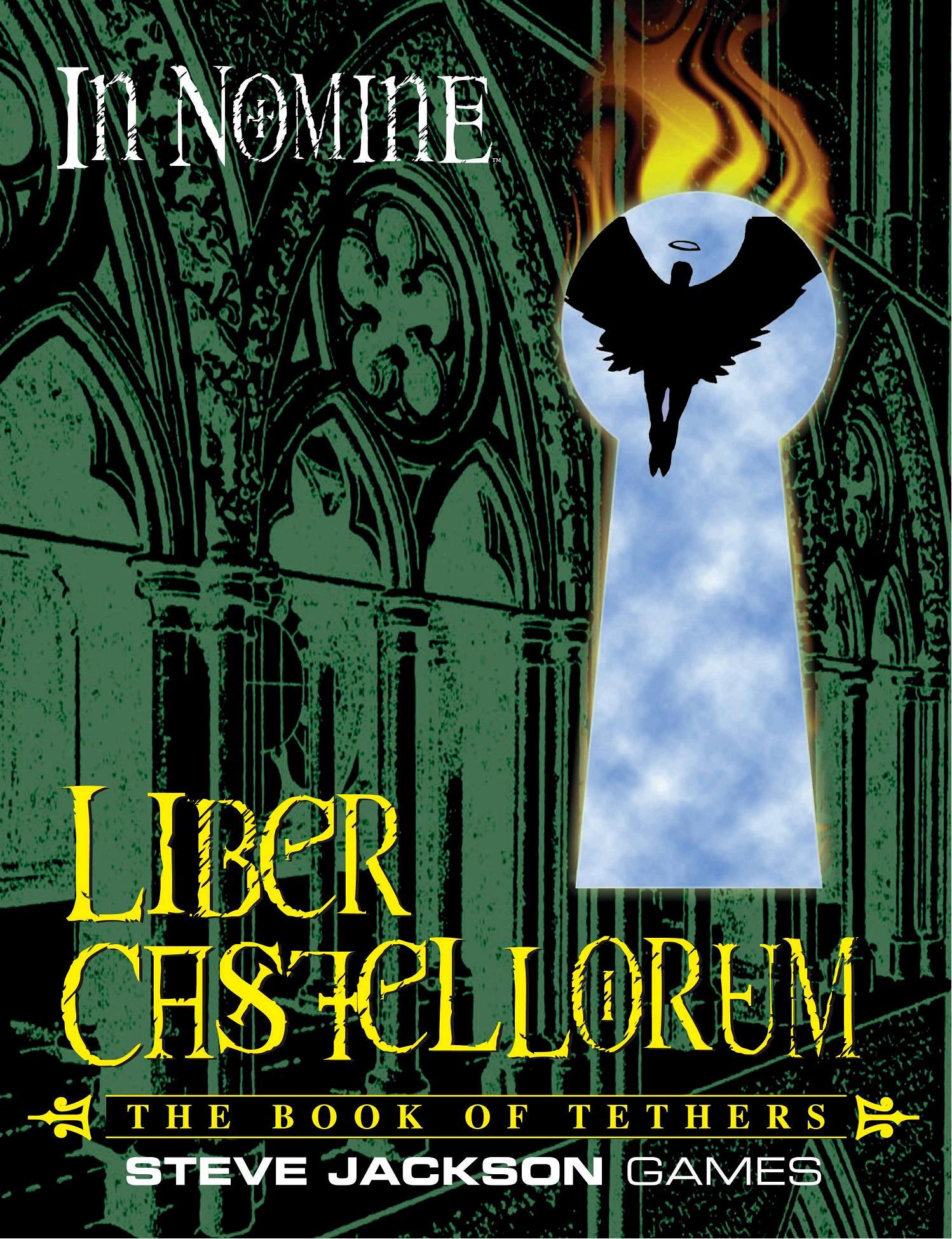 Our opening is a set of fiction. First up, Laurence lectures Seneschals-to-be on Tethers. The purpose of Tethers, he says, is multiple. They nourish a Word, protect a local mortal community, act as a base and staging area, and are open links to Heaven. He reminds the angels that day-to-day work of fighting demons and protecting humans is not all their duty, and that they must remain vigilant. While demons rarely attack Tethers directly, they will spy and try to weaken and corrupt it via the humans around it. One of the best ways to prevent this is to identify demonic Tethers, learn their ways, and spread the influence of angelic Tethers against them.

Then we cut to Baal explaining the tactical uses of Tethers. He explains that they are military outposts, and even those that serve Words he doesn't like are useful, because each Tether marks Hell's territory. He instructs his potential Seneschals to strengthen their Word to support the local Tether, and to try to corrupt angelic territory...and that of any Hellish Words that aren't allies. Anyone that isn't for you cannot be totally trusted, after all. And, of course, never disobey orders. Ever. Tethers are vital resources, never to be betrayed or left vulnerable.

Then we cut to Athena and Apollo, who discuss that they're losing Tethers, and that Heaven and Hell are encroaching on Delphi. Apollo tells Athena that they are dying, but she refuses to accept it. Athena assures Apollo that he is not forgotten, and he tells her that their Tethers are dying. She tells him they aren't dead yet. 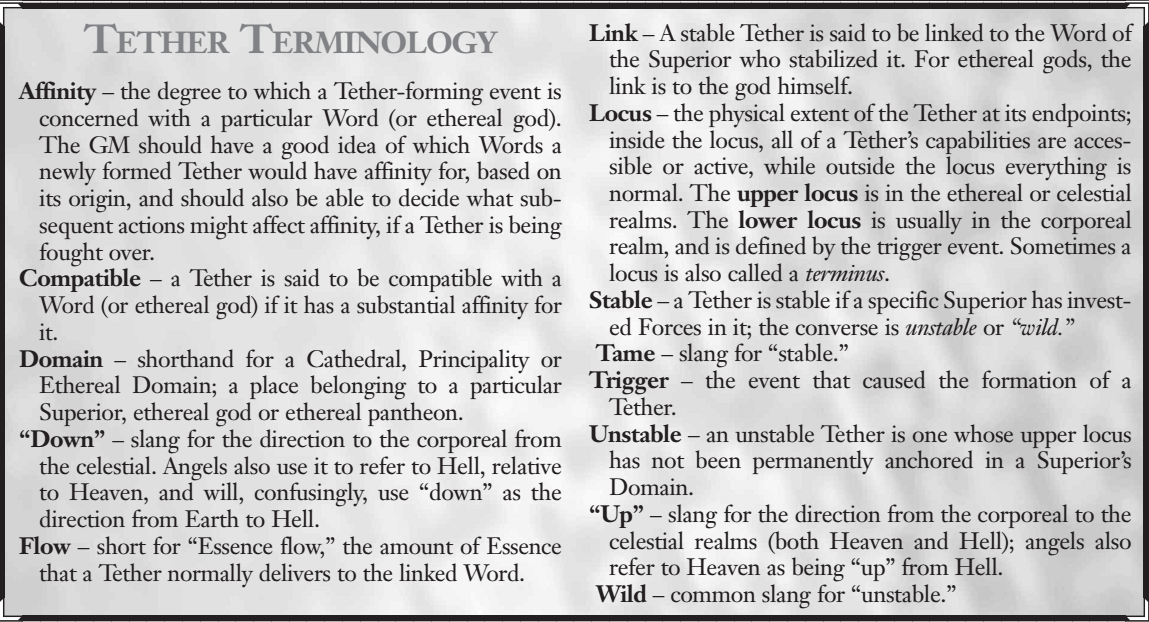 So, what is a Tether? Angelic history holds that the first Tethers formed shortly after the Symphony was created and formed the basic elements. Gabriel found she could dive into the Sun, David learned of a route via the great mountains, Janus explored the storm currents. Soon, they learned to stabilize these natural ties to their Words, binding them with some of their own Forces, which let them tap into the Essence flows from them. Later, as life grew and evolved, the empty Marches began to fill with dream-Essence and fears. Tethers formed from Earth to the Marches, and from the Marches to the Words of Dream and Fear, creating the Tower of Blandine and Beleth. When humans appeared, many new themes appeared with them. Tethers multiplied, formed fro mtheir collective passion as well as the natural world. Repeated actions by humans often fed Essence into the Symphony, strengthening Words. When religion was invented , some of that power was knowingly shunted off by worship, creating both the ethereal gods and Tethers to their Domains.

A Tether is a link between two realms. Usually, the corporeal realm is seen as the lowest, the Marches in the middle and the celestial realm the highest. This is because the natural events that form Tethers normally occur on Earth or, more rarely, the Marches. However, it is theoretically possible for a Tether to form backwards or even link two parts of a realm. The physical endpoint is known as a locus, which is well-defined and has a sharp boundary, though its shape or position may change over time. The lower locus is usually the area where the creating event happened, but it might shrink or expand if the event is ongoing - IE, a restaurant that's a Tether to Hunger can get bigger by adding a new dining room. There is no visible sign of the lower locus on Earth, but if the lower locus is in the Marches, it will have a symbolic appearance of some kind. 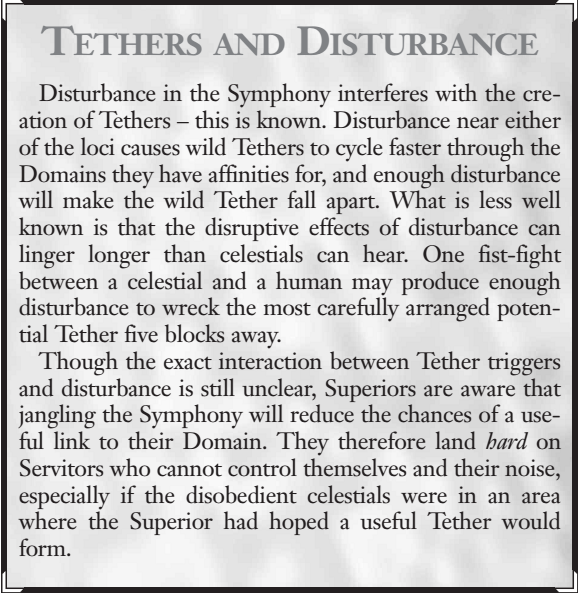 The upper locus of a Tether will be in the Domain of the Word the event best maps to, and its size typically indicates the Tether's power. The appearance of an upper locus is chosen by the Superior that stabilized it. Often, its form is obvious - a gate or door - but it can just be a pattern on the floor, a room or even an object. The upper locus of a wild Tether appears as a rippling vortex in the air, which may move around. The upper locus of an ethereal Tether manifests in a location belonging to its associated god or pantheon.

Tethers funnel Essence to their upper locus, and pull down a but of the nature of that locus in return. The Essence that flows from a Tether is generated by actions or natural processes that enhance the linked theme. Celestial Rites also, indirectly, contribute. People in the Tether's locus can also generate or donate Essence via ritual, most commonly the worship rituals of ethereal gods. Non-corporeal beings can head either way along a Tether, though going up takes a Will roll if it is not naturally your 'home.' Any place in Heaven is home to angels, but demons are only home in their Prince's Principality. Ethereals straight up cannot enter the celestial realm. The lower locus, meanwhile, is strongly tied to its Word, giving +3 to the invocation TN of the Superior whose Word it is. Further, Superiors and Seneschals can tap into the Tether's Essence low, though some Seneschals must be in the locus to do so. The flow from a wild Tether sprays out of the upper locus randomyl, dissipating uselessly. Everyone within the locus is affected by the Tether's Word. This usually causes an appropriate emotion, intensity varying by Tether power. Non-mundanes can make a Perception roll to notice the influence.

A Tether can only be created by conditions within the Symphony that emphasize one or more themes. The trigger may be a powerful natural process, a significant occurrence among humans or a strong and repetitive set of human actions. Even Superiors cannot make Tethers by supernatural intervention. However, celestials can nudge humans in directions that might help Tether formation. God could certainly create Tethers, and Lucifer might be able to, but no one knows of any examples of either. There are no fixed rules on what causes Tethers. They are often associated with places where humans unconsciously spend a lot of Essence, where they've done the same activity for a long time, or where human deaths have occurred. Areas where humans experience powerful emotion, especially over long periods and/or in large groups, are also potential Tethers. Whatever the trigger is, however, it's always extraordinary and rare. In a given year, only a few Tethers actually get created, if any.

For a Tether to form, there must be at least one compatible Domain for its upper locus. If no such Domain exists, no Tether. Abandoned Cathedrals such as Oannes' Grotto qualify, but without a Superior, the Tether can't be stabilized. When the conditions are right, though, a wild Tether forms. This usually makes no Disturbance. A Superior must stabilize it by investing personal Forces into the Tether, linking it to their Word and Domain and allowing them to tap into their Essence flow and anchor the upper locus. Discovery of a wild Tether is worth a great reward if your Superior can stabilize it before it goes somewhere else. Tether loci can interfere with each other, however. Tethers to the same Word do not form close to each other, and trying to stabilize na upper locus to close to another upper locus can force the wild Tether to jump away or even get destroyed. The more potent the Tether, the less interference it can handle and the more it causes. Few Superiors take chances with Tethers, so their loci are often spread out over their celestial Domains. Lower loci can also interfere with Tether formation to other Words, so it's rare, but possible, for new Tethers to form near existing ones. Once a Tether is stabilized, the Superior generally appoints an attuned Seneschal, sometimes a Wordbound one. A Seneschal is not required for a stable Tether, but greatly increases security and usually lengthens a Tether's lifespan. 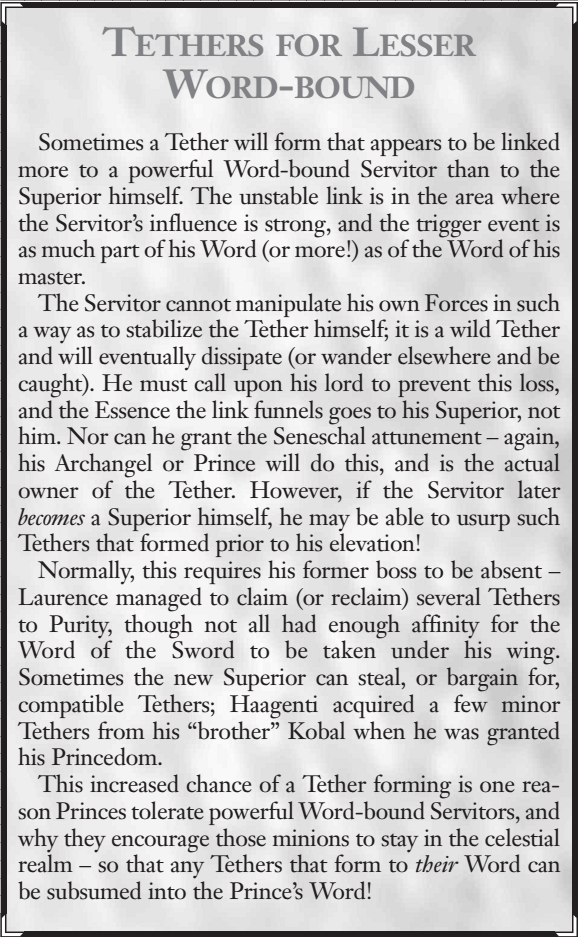 After a Tether is stabilized, it can enter a growth period, where its power and connection to its Word are increased, typically due to a Seneschal's encuragement but not always. This can last days or decades, but is usually around a year. During this period, defensesm ight be weak, and the Tether can be stolen by other Words, if it is destabilized. It is also easier to destroy. The Superior and Seneschal often work together to link the Tether more tightly to their Word, to prevent theft. This is easiest with Tethers based on human perception of an event. Increasing the Tether's affinity or power often involves manipulating those perceptions via songs, stories or news reports, all of which augment the symbolic value of the Tether in human minds, sharpening its focus. Other potential owners will fight these efforts, of course, as will enemies. In battles for Tether ownership, popularity counts. Tether growth augments a Tether's properties - it can add Forces, increase Essence flow or develop new Features. Each Tether's growth is unique. 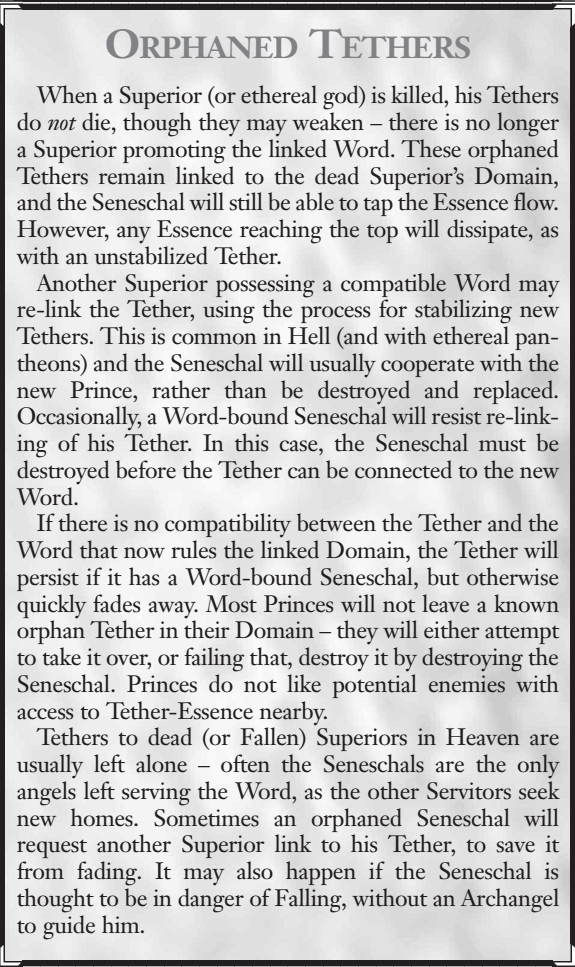 Mature Tethers are most common. They don't change much over decades, even centuries. They're safe havens with strong defenses and good staff. They usually have a Wordbound Seneschal, to. They are sometimes attacked, but mostly as probes to check that they're still strong. However, a point comes where the Word linkage wanes. The trigger event fades from human memory, or the activity supporting the Tether falters, or the environment changes, or the physical parts of the Tether are destroyed. When this happens, the Tether becomes old and weak, on the path to extinction. Features begin to fail, Essence slows and so on. If the problems can be reversed, the Tether's health can be restored, but otherwise it will slowly die. Tethers are often as vulnerable in this period of age as they are in youth, especially to indirect action against their Word linkage. Often, however, a weakening Tether is not worth destroying. Old age rarely lasts more than a few decades, after all.

And eventually, Tethers do die. Few last more than a century or two, though a rare few last over a millenium. As human civilization changes more quickly, Tethers age faster. What finally kills them depends on how they were born. Those generated by an event fade when the memory of the event does, or the physical structure decays. For these, a Wordbound Seneschal can hold them together as long as they live, even if memory and physical traces are gone...but that kind of Tether is a pale wraith, and must be constantly protected for the Seneschal to survive. If they die, the Tether either goes wild or vanishes. Tethers made by continuous activity last only while activity persists. They are less likely to require a physical structure, and can sometimes be moved...but if the pattern of activity is broken long, they die fast. Some Tethers are tied to a specific object or building. Destroy that, the Tether dies. The longest-lived are the ones made by natural forces - the Sun for Gabriel, mountains for David, the Tether on Io for Jean (as it is part of the largest electrical circuit in the solar system). However, a Tether can also be destroyed by breaking its Word-link completely, though that normally requires a new event of equal importance to the original trigger.

Some Tethers, as noted, can be moved. Some are just physically capable of it, while others can shift if the circumstances that maintain them can be moved. An upper locus is easier to move - it can be reshaped by its Superior's will. When it has an affinity for another Word, it can alsp be transferred to or even stolen by a compatible Superior.