The Everlasting: Book of the Unliving by Mormon Star Wars 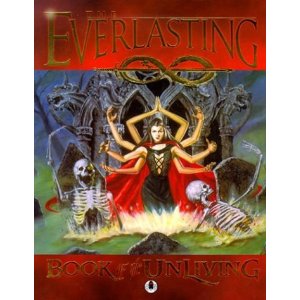 The Everlasting is his solution. It's the World of Darkness with all the "bad" stuff - "immature" quests for power, monty-haulism, and the tendency to want to play superheroes - taken out and replaced with a heaping of mysticism and whining about how civilization has destroyed story-telling and we're all dead inside because of it. It's also the vehicle by which we are supposed to better ourselves - but I'll get to that in a bit.

The game is made up of four corebooks, each of which offers three playable splats and two splats that you should definitely not try to play but which are given a chapter and a character creation write-up anyways. You are given a bit of powers for each one, but the vast majority of characters abilities are in a different book. Every splat section has a big-ass XP chart for buying abilities in this separate book.

You know this book is going to be awesome, because he doesn't even make it past the first page before he starts needing to refer to the glossary. The credits thank the:

We also get a shout-out to God and a Blessed Be to the Bible to start out, so I'm definitely getting a Mark Rein Dot Hagen feel already. I'm ready to get blessed with gnostic wisdom for playing a game about ghouls, let's go to the first chapter.

You know, after the 11 page intro story involving Teombi, the black "tribal witchdoctor and priest of the dark nature religion of his people" teaching his occult secrets to a blond-haired superman who then moves to the united states and finds "his career as a speaker at American lyceums about both improved health through natural remedies and African folk-magic and religion."

Book One: Orientation: Into the Darkness

Like all good vampire books, we gotta start off with an Anne Rice quote. I've never read Anne Rice so I'm not sure how sad all her vampires are, but Louis sounds like a really sad dude. To give the book credit, the first image here is a rad skull zombie chowing down on a fat accountant. 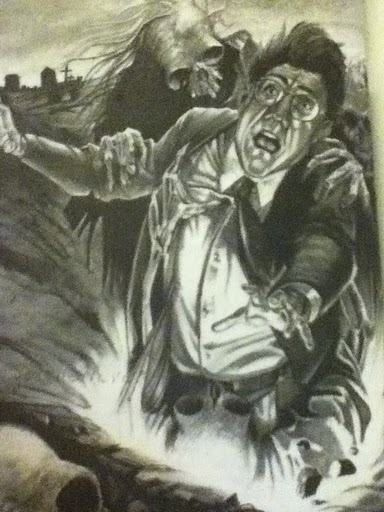 This is immediately undermined by the intro: " Do you believe in the supernatural? "

This guys answer is, "You might not, but you probably should because it owns and science is alright but it's just missing something about the soul of mankind."

I kinda want to type this out to get the full impact , here. I'll just do one of the choicer bits:

How can something be proven not to exist just because you don't see it every day? Can you disprove atomic particles or the Crimean War just because you have not been a personal witness to either? And if you are willing to take science as fact because it can be defined or because it is given credence by authority, do you reject the supernatural because it has never been defined? Certainly there are people in positions of authority (other than scientific positions) who believe in the supernatural, including all religious leaders and many political leaders.

Wrap it up sciencailures, you can't prove this book won't make you virile and attractive and a social butterfly. No technocracy here. Welcome to the goody room.

Now we get into the actual game section. I'm going to post a picture here, because I'm not sure if the description can really do this justice. Every chapter is made up of normal text, and then lots of the rules and terminologies that are written in tiny italics in the margins of almost every chapter in the book. 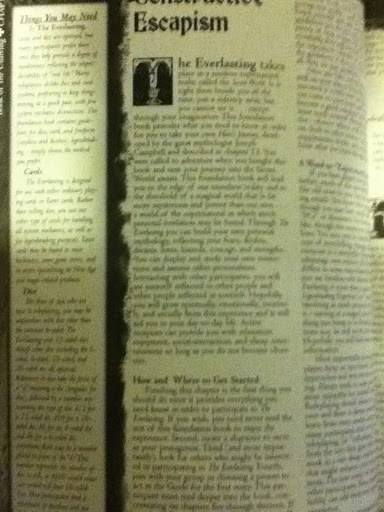 Here's Steven Brown to explain what the game is and why you should be PUMPED UP right now:

This foundation book provides what you need to know in order for you to take your own Hero's Journey, developed by the great mythologist Joseph Campbell and described in chapter 13. You were called to adventure when you bought this book and now your journey into the Secret World waits...
...Through The Everlasting you can build your own personal mythology, reflecting your fears, doubts, dreams, loves, hatreds, courage, and strengths. You can display and study your own convictions and assume other personalities. Interacting with other participants, you will see yourself reflected in other people and other people reflected in yourself. Hopefully you will grow spiritually, emotionally, creatively, and socially from this experience and it will aid you in your day-to-day life. .