What's it all about? 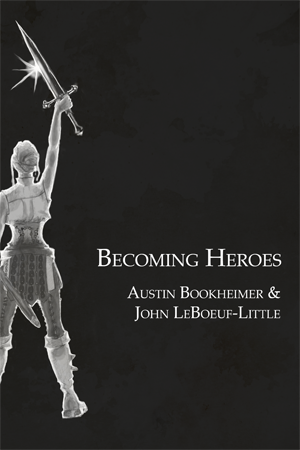 Full disclosure: this game was made by a couple friends of mine, but I will try to keep it impartial.

As mentioned earlier in this thread, I’m a big ‘ole storygaming, fun-having, pretention-dabbling swine, and so are most of the people I game with. The folks who make up Transneptune games, for instance, are working on a Regency-Era RPG, love most of the games that have made an appearance in the Indie Games thread, and are really big on exploring the relationship between Game and Mechanics. Every Mechanic should have a purpose and further the themes, ideals, and moods of the game. Becoming Heroes, then, is an attempt to focus on mood and storylines with only as much in the way of mechanics and randomness as is necessary to achieve that focus.

What’s it all about?

Becoming heroes is all about Heroic Fantasy (or Science Fantasy). It’s about heroes going against the odds, collecting plot coupons, and fighting Evil. Think Lord of the Rings or Star Wars: there aren’t many complicated Big Bads here, just clearly malignant forces that your plucky band of characters needs to stop.

Rather than worry about milieus and versimilitudes and 10’ x 10’ rooms filled with orcs, a game of Becoming Heroes is going to be focused on your character’s personal storyline. Maybe you’re the Chosen One, or the everyman Zeppo, or an almost villainous Dark Knight. As a player, you will guide your character through the larger story (toppling the Evil Empire) while also taking them through their own personal Arc, which includes three required events and three optional events. Once you complete your arc, you can transition into another storyline instead. Maybe your grim Dark Knight, upon defeating evil, decides to try to repent and enters a monastery. Whatever happens, you acquire a new personal storyline to venture down.

Rather than D20s or 27d10 (difficulty 6), the system relies on traits that are very much like Aspects in FATE. Being a Master Swashbuckler can be helpful for acrobatics, duels, or climbing rigging. Better Alone gives you a bonus any time you act independently. Solves Everything With Magma Kraken is great for when you absolutely, positively must destroy everything in the surrounding hectare. Also like FATE, some of your traits can be turned against you when say, unarmed, or in a crowded fight, or when you DON’T need to destroy the surrounding hectare. Each trait that you have invoked gives you +1d6 to your roll.

So far, other than the bit with storylines, this does sound quite a bit like FATE. Where it skews away is with its use of currency. While FATE had, well, Fate Points, Becoming Heroes lets you accumulate Destiny and Doom points. Spending Destiny gives a decent bonus to your side in a conflict, while Doom gives a larger bonus. Spending either gives you a circumstance afterwards, or even a permanent trait. Spending Doom represents taking the easy way out, giving up your ideals to get shit done, and being marked forever by it.

Spend 3 Destiny to turn the tide in a battle? Gain the Hero of the War trait, permanently.
Spend 1 Doom to do the same thing? Gain the ‘Poisoner’ fleeting circumstance as you narrate how your slow-acting poison hurts the enemy troops.
Spend 1 Doom, 2 Destiny… and that point of Doom infects your Destiny. Now it counts as if you spend 3 Doom and you permanently gain a villainous trait. This ‘infection’ process is called Creeping Doom.

You can also use Destiny and Doom to fuel ‘Threads’. Threads are probably my favorite part of the game. These let players and characters ‘hack the plot’ in some way. Got access to the general of an army, 2 Doom (or 1 Doom, 1 Destiny) to spend, and the Seize Control thread? You belittle the general in front of his troops, prove your superiority, and hack off his head. Bam: You just got yourself an army and a villainous Lasting Circumstance.

Threads are a Big Deal. Scrying, pulling a surprise bomb out of skirt, inventing Necromancy, or summoning Nyarlthotep into the world all fall under Threads. They can, if the players so choose, take the plot and turn it at right angles.

And I’ll start going through the book a chapter at a time in my next post.