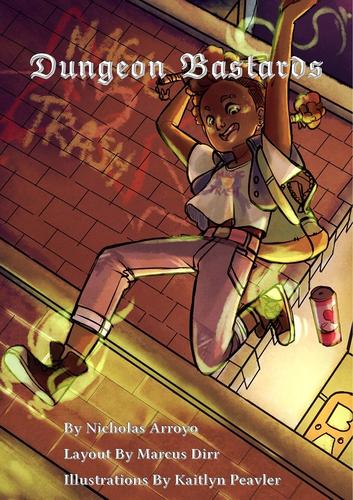 A Game About Assholes Rummaging Around In Town

Note: For transparency measures, I received a complementary copy from the author for review purposes. If you hang out at the Something Awful Trad Games forums, you might know him as Covok.

The meta concept of an "adventuring society" has not gone unnoticed in the realms of parody and satire. The Red Dragon Inn focuses on the inns and taverns where dungeon-delvers gather and their drunken hijinks, Recettear focuses on the life of an item shop owner digging her way out of debt, and the sample game in RPG Maker detailed the life of a monster goblin who sought to become a proper Boss.

Dungeon Bastards is a rules-lite table-top RPG which follows a similar path. The focus of the game is on a group of sociopathic and probably inebriated adventurers back in town and up to no good. It emphasizes poorly thought out shenanigans and belligerent conflicts. Think of the Rat Queens comic and you're probably close to the mark.

The writing style is intentionally vulgar in imitation of the play style:

You play Dungeon Bastards by sitting around with friends and bullshitting about being cool people. The Losers play their self-insert fantasies while that Dickbag plays the fucked up world they live in and the shitbags they share it with.

There are also Skills. They are the shit you don’t suck at. Don’t be a nerd and put things like Knowledge (History). Pfft! Nah, man, put shit down like Getting Crunk or Smashing Faces.


There are quite a few products which are written this way in an attempt to be edgy, most notably more than a few in-character White Wolf stories and such. I feel that its success can vary wildly depending on the reader: it's done more for humor's sake as opposed for a "shit sucks" grimdark narrative, although in this case I feel that it works in that the PCs are intended to be macho adventurers with more bark than brains, so the text comes off as how they'd actually talk in-game.

Dungeon Bastards uses six-sided dice for its resolution system. There are Moves in the game which trigger depending on the enfolding scenarios (sort of like Apocalypse World system) and you roll a number of dice depending on your Stats and relevant Skills (which add two extra dice when they come into play). Every 5 on a die counts as one success, every 6 two successes. Competitive Moves have people subtract their successes from their opponents before resolving it, while passive Moves require 1 to 4 successes depending on their difficulty. There are four Stats and are relatively all-encompassing, including Brains, Fists, Guts, and Mouth, and correspond to the abilities you imagine them to.

Be it fighting, getting high, bullshitting someone, or even getting hurt, the Basic Moves are more or less universal for the scenarios for this type of game and provide a good format for expanding beyond. When you gain successes, you can spend them as points to gain additional benefits in narrating the scene. For example:

Fuck All Y'All!
Passive Mouth
When you sit down and chat with some dweebs, roll Mouth passively. Spend your successes to narrate the following throught the scene.
• They agree with some of your stupid opinions.
• They begin to respect you.
• They begin to hate someone you want them to hate.
• They feel better about their fucking selves.
• They feel worse about their fucking selves.
...until you spend all your successes or are satisfied with the result.


Spend successes for bonus stuff. It's a fine idea, but some moves have narrations which are better than others.

Time To Beat Some Ass
Passive Fists
When you beat the shit out of some punks, roll Fists passively. Spend your
successes to narrate the following throughout the scene:
• You kick all their heads in.
• None of them get away.
• The whole thing makes them look like little wimps.
• They don't even touch you.
• You keep one as a prisoner.
...until you spend all your successes or are satisfied with the results.


If none of them get away, wouldn't this practically allow you to take one or more of them as a prisoner? I assume that the idea is that without the prisoner narration, they'll be too beaten/dead to be of use for whatever you want them for or you have to flee the scene due to the city watch, but I can see some groups raising this in play. "But I took them all out single-handedly?! Why can't we just pick one up and haul 'em off?!"

So, what happens when you roll poorly and things don't go so well? That's where BULLSHIT comes in. The Bullshit Meter serves as a player character's health, and represents accumulated humiliation, exhaustion, and injury over time. When the Meter gets full and they fail again, they either die or "say fuck this and leave the group like a little wimp." Either way, they're out of the game and the player needs to create a new character.

Or they can permanently decrease the Stat of their choice by one and reduce their Bullshit Meter by one. However, this can only be done once it's full to avoid PC loss, so it prevents casual use of Stat drain as a "healing" option.

Thoughts: The resolution system is quite simple, with no real variance and a reliance on narrating things out instead of setting benchmarks. This works very well for the beer-and-pretzels game Dungeon Bastards is going for.

The player writes their objective they want to perform while in town, and then they pass their character sheet off to the player on their left, where they write down how they feel about that character and how they met.

The Dickbag is the Game Master in Dungeon Bastards, and this section has the typical advice for running the game. It's rather simple, but beyond the obvious (give stats only to people who matter, don't be creepy or engage in power fantasies, etc), it explains that one Move should equal one scene so that the game isn't bogged down in die rolls, and to try for an even mix of tasks so nobody feels left out. Also, PCs who get the same number of successes end up at a stalemate (Well, It Could Have Gone Worse) and nobody takes a hit to the Bullshit Meter.

Conversation Starters is an adventure generation table. As the game only uses d6s, two six-sided die are rolled, one represent the tens digit and the other the ones digit. You still get 36 results from this, and range from the petty ("An army is laying over in town and taking all the beer! This can't stand!") to the more standard adventure scenarios ("An Elder God has tracked you down for revenge. Fucker is a killer at parties.")

Dungeon Bastards ends with a sample character sheet, a picture of a drunkard getting hauled off as he says "Now Go and Play Already!" and a back-cover blurb.

Final Thoughts: Dungeon Bastards is a short and easy to learn pick-me-up game with an interesting idea. It's cheap enough that price isn't much of a concern, either, and the spin on the "muderhobo" stereotype of adventurers is something many players are well-acquainted with that they can easily imagine the type of game it encourages.

If you're interested it's for sale on Drive-Thru RPG and RPGNow for $2.50.