Book of Harlots by Libertad!

posted by Libertad! Original SA post It Came From Drive-Thru RPG: The Book of Harlots 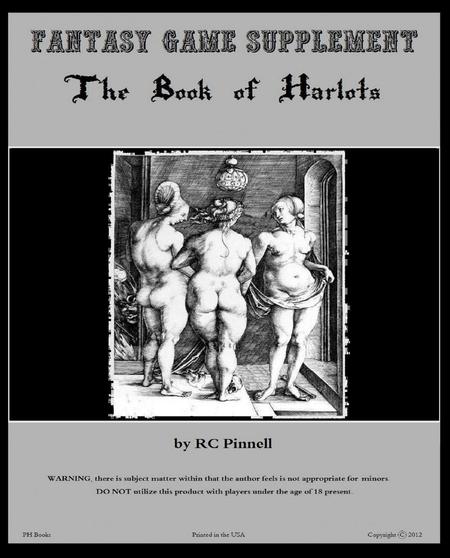 Several years ago I wrote up an erotic Arabian Nights part-setting part-house rules for D20. It involved stuff like receiving magical boons from having sex with genies, NPC stat blocks for fertility pagan cultists, and adventure hooks for harems and Turkish baths. I never posted it anywhere, much less published it in PDF format; it was but a product of a fevered gamer's mind, and I deleted it once I seriously thought of who could benefit from it other than myself. I can't use it in a typical group game, for obvious reasons. It really didn't help if you're doing one-on-one gaming with a significant other: the execution and enjoyment is in the characterization and mood, not game stats.

And I have to ask the same question regarding this 8 page minibook, because I really can't identify who it's for. It identifies as an OSR (Old School Revolution) product, derived from the rules of 1st Edition AD&D. Like other online D&D sex books, the majority of its content is dedicated to game mechanics, in this case random charts and tables and extraneous details. If you ever needed an average population figure for prostitutes in a hamlet or metropolis, or the level ranges of bodyguards, then this book's got you covered! Everyone else, eh I can't really recommend this. :/

The first part of the product expands upon the "wandering prostitute" random encounter in the 1st Edition DMG. Gygax's infamous prostitute sub-table consisted of an "[adjective] [prostitute synonym]" schematic, because apparently it's important for the party to know whether the DM's describing a "saucy tart" or "brazen strumpet." The Book of Harlots goes one step farther and provides a table for all the harlot types, including average Comeliness (optional ability score) and typical price for services.

Encounters with Working Girls will be difficult for the party to distinguish between types. As these can range from a "Slovenly trull" to an "Expensive doxy", general appearance is not all that telling, even for the keen eyed party member out on the town for a bit of frolic. For in some cases the encounter may be with nothing more than a local dancer, prostituting herself to augment her income or to fulfill some libidinous drive. Or it could be an elderly madam, out soliciting for her stable back at the Pleasure Palace.


Tricksy prostitutses! They think that they can fool us, precious!


You know what really gets me going? Fractional mathematics.

It is difficult, at best, to regulate this factor into the role playing involved. Each player's character will have certain preferences based (most likely) on the player's own. Thus, the following table is calculated upon the harlot's racial preference(s) and not the clients'. For example, a female elf courtesan, is not likely to entertain a client or low social class regardless of his/her ability to pay. But if she is (say for need of instant cash!) so willing, then her rates would certainly inflate accordingly. Thus, the tables reflect an adjustment to the figures previously mentioned, based on the client's race and social class; note, the client's "looks" are not ignored, but enough money will overcome such as long as the other requisites are not compromised.


Half-orc prostitutes are choosier and stingier than their elven counterparts (they'll charge 15% more for a half-elf client as opposed to the elves' 5%, 50% more for a dwarf than the elves' 15%). And elves charge higher prices for humans than for halflings. I really just don't understand this table.

I think the author has a fetish for compound numbers; you're never going to get a flat 1 silver piece with this system. It's even more unnecessary complication for something which should be quick and simple. This sums up the Book of Harlots in a nutshell.

The next part is a full-page overview of sample NPC statblocks for prostitutes, separated by type (saucy strumpet all the way up to expensive courtesan). The majority are either 0-level characters or Thieves, with a few Fighters and a Magic-User for good measure. We also get the working girls' heights, weights, and ages. We also have separate class levels in parenthesis for prostitutes in larger towns and villages. You know, because this is all so important for a DM to know.

The actual working location will vary, of course, depending upon the status of the harlot. Those of the lowest ranks will gladly spend a few turns in an alleyway, or on the back porch of a business; few of these ever take clients to a room somewhere, unless it is the practice of their pimp to muscle the client out of even more money. Brazen tarts, Wanted wenches, the Haughty doxy and Expensive courtesan usually keep an apartment with at least 2 rooms--as many as 12, in which to entertain clients. These are furnished according to the status of the harlot; with the lower ranking ones residing in more pungent and less clean conditions.


You know, I think that the appeal of sexual themes in RPGs is to make them sexy. When I think of "The Book of Harlots," advertised with medieval artwork of naked women with a "not for minors!" warning, I get a very different vibe than a dry academic text. I can sort of get the "slumming out" appeal of some sexual fantasies, but even these descriptions do not inspire me in any way to use the material.

I don't see the excessive need for focus in all this. Would the author have devoted as much time and effort to stats and sale of breadmakers or other medieval occupations?

All Harlots have skills in areas that assist her in the performance of her normal function. This qualifies her profession as an unofficial class; though she does not gain experience points for performing her primary duty, gain levels and/or additional hp, as such. All Harlots have at least 1 Support Skill, while some will have many. The number of skills a harlot possesses is directly related to the sum of her INT/WIS and CHA/ COM divided by 10. The harlot uses the higher ability in each pair to determine the outcome. For example, using #1 from the previous list, the highest total this harlot generates is 21. Divided by 10, then she will possess 2 Support Skills (fractions are dropped). Once the total is thus determined, you can randomly roll or personally select the skills you feel the harlot would embrace according to her status.

We get 10 support skills and in some cases subsystems for using them. Quite a few make sense and fit (musician, eroticism/sexual performance, etiquette, dancing), but one in particular jumps out:

Animal Handling & Training
With these skills a harlot will be able to attract to her service a creature-companion. The type will vary from small to large size, as exampled by a cat, dog, dove, ferret, or horse. In some cases the animal-companion is used during the services she provides to customers, but such is not always so. There is no limit, except that which you decree, to which the animal companion can be used. You should determine which types of creatures you will permit in your campaign, and how much control and communication the harlot can achieve with the animal.


I don't know what's more disturbing, the fact that the author felt it necessary to insert mention of bestiality, or that the author believes that the DM needs to keep a lookout on limits for animal companion's number, variety, and power. Is this book geared towards prostitute PCs or something?

Harlot Society is a population distribution of prostitutes by city size. Even in the smallest thorp you're guaranteed as least one working girl.


We finally get to some fluff text, where the author talks about issues for the DM to handle before inserting this material into games. Namely determining the legality of prostitution in the setting, "empire by empire" in case the PCs like to do cross-country trips. Oh, and the punishment for prostitution as well! I'm pretty sure that this can work just as well when it comes up, in case during the course of the campaign the PCs never visit the frozen north or the other side of the continent.

He also discusses the age of consent and historical prostitutes:

Solving the legality of prostitution is not simple. But once done you should consider the following issues in order to avoid uncomfortable situations that are likely to arise. The idea of "minors" and our modern definition of what that means is not one shared with all of history. Not long ago, there was simply the state of childhood, and adulthood, with the doorway from one to the other usually being a brief moment in time, when a young girl began menstruating. Once started, she became a junior member of the adult females of society. You should, by all means, exclude young NPC females from your campaign if this concept goes against your moral beliefs, makes you and your players uncomfortable, or any other reason you like. For those not bothered by the concept, it is possible that young girls will be used by a harlot, or house, for soliciting customers. These girls will be dressed provocatively, and will know the rates and techniques of the harlot she works for; those employed by a house will know the names, ages and rates of all the women working there.


The societal standards of D&D do not perfectly align with our own ancient world (the whole "slavery is evil!" thing the most notable example), but for some reason I keep seeing gamers use the real world as an excuse to insert this stuff into their game sessions and worlds. I don't care if 13 year olds were married off, it's still really squicky to include in a game!

Oh, and deities dedicated to vice have temple whores, where the sex is free for new converts to their religion (I sure can't see this system being exploited!), and legalized prostitution has a system of building markers and clothes colors/badges to identify prostitutes.

Prostitutes in sufficient numbers employ herbalists and divine spellcasters at clinic to prevent and cure STDs. Even prostitutes in competition recognize the value of such a figure.

At 9-10 Comeliness you can hire up to a 3rd level Assassin, 4th level Fighter or Thief, along with multi-classed individuals of a similar level. 17-18 nets you 5th-7th levels. Forget money and experience and leadership qualities, all it takes to recruit the best hired help around town are some striking good looks!