I was looking through my collection of rulebooks, PDFs etc. out of boredom recently. Sitting there in a neat little folder is the core rulebook for one of the coolest post-apocalytic RPGs in recent history. Well, I suddenly feel like rereading the book after all those years. And after a bit of googling to find out whether they're still in business I have found out that the authors, together with the people behind Eclipse Phase, released a preliminary run of the English language version at Gen Con 2011. I did mention that it's originally in German, right?
Anyway, I think that it's just the right time for you to get a good look at the game. Now, everything will be translated (badly) by me because I don't have access to the english version myself.

DEGENESIS (all caps!), a "primal punk" roleplaying game according to its authors. 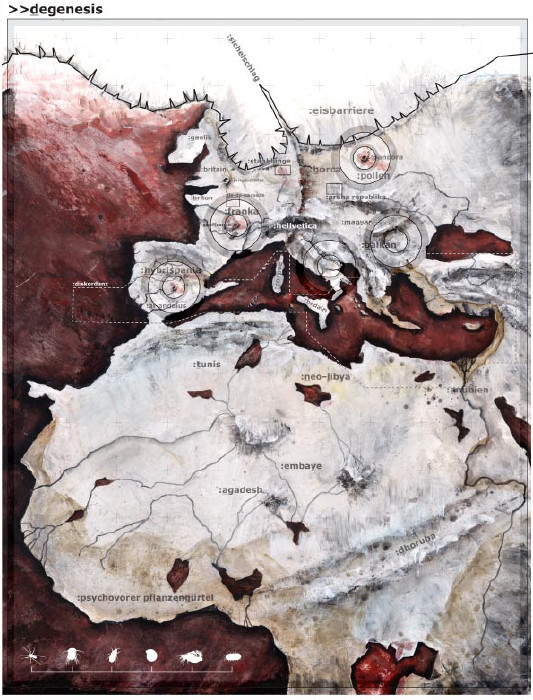 This map is missing from the latest PDF but fortunately I have an original release PDF with both the map as well as higher quality pictures than the current revised version. And this book is chockful with appropiate artwork that sets the mood quite nicely.
As you can see from the map the setting is centred on continental Europe and North Africa. Other parts of the world are alluded to in the history chapter, but because global communication and ocean travel broke down completely there is nothing concrete about how the other continents fared in the apocalypse and subsequent short ice age.
Now, the setting fluff is really interesting and unlike CTech its authors handle the mundane horrors people inflict upon each other in a far more skillful and tasteful manner than the CTech hacks ever could manage, well anything.
It also definitely helps that over half of the book is simply setting info without any rules at all.

First the book describes the seven basic cultures that have developed in the 500+ year time skip since the world as we know it ended.

- Borca : Germanic tribes: the post-apocalytic version. Some still search the ruins for useful or valuable things of their forefathers others have become nomads who roam the desolate plains with their herds ignorant of their past.

- Franca : A meteor carrying spores impacted here and those who were changed by them have the ability to influence their fellows to a certain degree with pheromones. Recent incursions by other factions have unsettled the status quo and the masses, drunk on the sweet scent, begin to reawaken.

- Pollen : Nomands out of neceessity because the few spots of remaining fertile nature can disappear as suddenly as death comes for those who stray too far from the safety of their communities.

- Balkhan : Wild, untamed and fractured people. Their motto: "I fight my brother. Both of us fight our uncle and together we take on the whole world." Don't give them a reason to band together. They'll just hate you more for it.

- Hybrispania : One of the most violent of the known regions. Scores of both native partisans as well as africans who occupy large parts of the peninsula are killed daily here. Fanaticism also poisons the minds of those willing to listen, even just a little bit.

- Purgare : caught between two fronts: The Balkhan threat from the east as well as the internal threat of the pyschokinetics, their local flavour of of those changed by space mushrooms. These people weather all these assaults by banding together into large famailies and relying on the strength faith provides.

- Africa : The cities in the north have grown fat and complacent thanks to all the riches taken from the northern barbarians. But even these people leading comfortable lives are threatened by the murderous corrupted flora crawling ever so slowy towards their cities from the south. The psychovore jungle first takes away your sanity and then your life.

In this time of need the people have banded together and forged new identities. These major Cults now dominate the lives of many.

- The Spitalians : With one hand they heal the sick, and with the other they dstroy the wicked and unnatural. Armed with both medicine as well as fungicides and flamethrowers to combat the alien spores. Their headquarters are located in Borca but they bring the fight wherever the spores may rear their figurative heads.

- The Chonists : Techfreaks by choice. They crave information and technology, especially about the past and they are in charge of the only universal currency outside of Africa. The Chronists' goal is literally to resurrect the internet before the fall of mankind. They are also easy to spot: Always wearing masks and concealing clothing as well as using modulators to change their voices.

- The Rechristened : Medieval church: Apocalypse edition! They, too try to cleanse the earth of the foul rot that has infested it and they have been successuful enough to have gained a steady foothold. This has allowed them to build up a force that spreads the word, by sword and fire if neccecary.
They make their home in Domstadt in Borca, specifically the Cathedral that survived to the present and stands as a testament to their faith.

- The Anubians : Spiritual defenders of humanity against the threat of the spores. Death interrupts the cycle of life and they know that they have to power to break the cycle of the invaders, thus stopping their assimilation of the earth once and for all. Unfortunately you have to play the same game as the Devil in order to beat him. Their presence is also a constant, unsettling reminder of death for the regular folks.

- The Jehammedans : They are as fanatic as the Rechristened are but unlike them they preach different teachings: Turn away from technology, for it has brought our ancestors ruin and community and family are strength.
They believe themselves to be the ones chosen to lead the new world. Their strongholds are in Balkhan but they gain more and more influence in Hybrispania as of late.

- The Apocalyptics : What do you want? Drugs? Sex? They can get you anything you'll ever want and they know what they sell because they've already tried it all themselves. Why bother if the world is already fucked up beyond repair. Just relax, sit back and enjoy the rest for as long as it'll last. They are either loved or reviled, there is no inbetween.

- The Judges : Justice is the foundation of civilisation and it's also best served with a sledgehammer. The Judges are in control of the city of Justitian and its protectorates. And they really do enforce their laws thoroughly so watch out!

- The Junkers : They aren't really a cohesive group but rather what poeple call anyone willing enough to search for artefacts of the lost civilisation in the ruins. Most of them barely scrape by while a lucky few strike it rich with a once-in-a-lifetime find the Chronists will pay handsomely for.

- The Tribes : They've regressed to what we'd consider an extremely primitive level: Nature worship, a tribal structure and consuming the flesh of their kills to gain strength. In this world their greatest asset is their freedom.

- The Pallids : Vault dwellers who ran out of lightbulbs and have adapted to their new surroundins in the five centuries since their ancestors entered the bunkers. They have excellent hearing and their voices are their greatest social assets. The Chronists, however, covet their stockpiles of pre-fall technology that the Pallids guard jealously.

- The Neolibyians : Rich merchants. They finance expeditions into the European lands such as Franca or Purgare for profit. Either through artefacts of the ancients or by taking slaves back home.

- The Helveticians : Descendants of the Swiss forces who survived the fall of mankind by diggin deep into the Alps. They demand tolls from the Africans, or really anyone, passing through their transit tunnels to the other side of the alps.
Despite their small size they can enforce their demands because they have large caches of pre-fall armour and firearms.


The main conflict of DEGENESIS is between the primitive Europe who were hit hard by the apocalypse and north Aftica who retained enough civilisation and technology to possess cars and non-shit firearms. And they haven't forgotten the times of past slavery, either.
Wait.
No, it's between mankind and the threat of corruption the space fungus poses that arrived on the meteors that shattered our modern society. This fungus has already affected the land, animals and humans and turned some of them into something not quite from this world.

Hmm, if I think about it some more it seems that it's simply about the challenge of surviving in this shithole.

The system is best described as "roll between". The basic roll is a simple 2d10 and your target is to roll beneath or equal your character's attribute + skill rating. If there are difficulties they are represented by a value that is 2 or greater.

The attributes themselves are broad categories and they range from 1 to 10:


Skills are usually linked with one of the above attributes exclusively. They are rated from 0 to 10. There aren't just skills that govern aptitute with certain pieces of equipment or certain actions like haggling, but also skills for each of the basic aspects of an Attribute.
An example would be Body + Strength which governs how much you can lift, or if you can bend a bar of iron out of the way.

If you want to lift a large rock you roll 2d10 and compare the result to your Body + Stregth rating. If you roll below you succed! If the weight of the rock is within acceptable boundaries. Now, say the rock is actually rather slippery so the Gamemaster may impose a penalty of say 3 on the roll. So Bob Eschaton has always been eating his veggies and his rating for lifting junk is a solid 11. He rolls his dice and anything between 4-11 would result in success and everything else in failure. 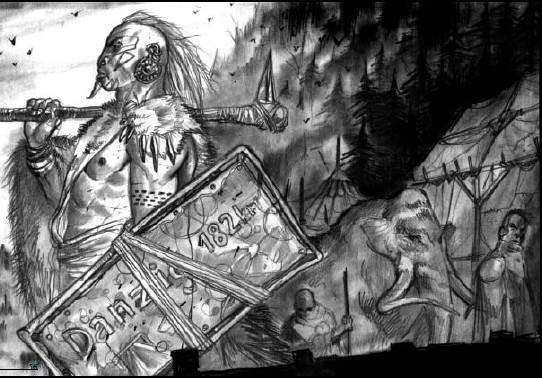