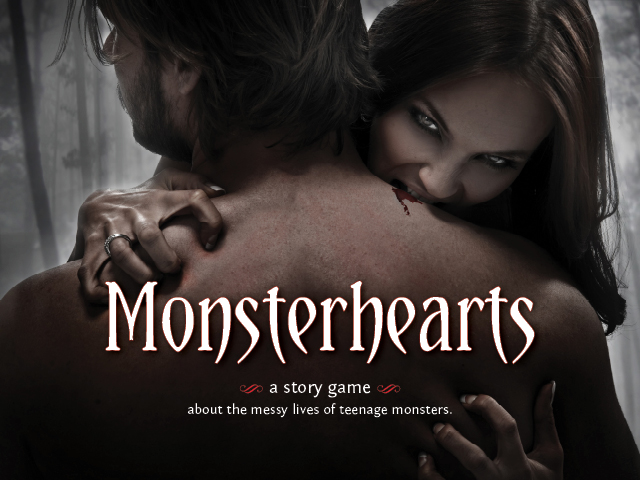 Do you sparkle in the sunlight and have brooding relationships with muttering girls? Do you transform into a werewolf while playing basketball to lead your team to victory? Is summoning the spirit of a demon named “Manon” after school your idea of a good time? Do you want your own group of Plastics to make fetch happen?

Welcome to Monsterhearts, a game of teenage drama, sexuality, and monsters. You play as a monster (or a gifted mortal) teenager. You’re in high school and you face the same pressures that many high school students have. Perhaps you are an athlete, a drama geek, a nerd, or just a nobody trying to be noticed. You might have a clique of the most popular girls and guys in school who worship the ground you walk on. You might be trying to join this clique, but keep getting rejected. You can feed on making people horny as a ghost or you can gather promises and contracts as a fae. But whatever else you are, you’re a high school student with homework, puberty, and intense social pressures.

This game is actually a ton of fun and falls on the obscure side of the spectrum rather than being something worthy of derision. Although I suppose it can be mockable in that it’s just so over-the-top in teenage sexuality and drama. I had the opportunity to play a session of Monsterhearts and I have to say we were all wowed by how much fun we had. One of the store owners, who played with us, left the table vowing to purchase copies of it to sell in the store. The result of a successful indiegogo campaign, it’s not available from distributors but is available for purchase on Mr. Mcdaldno’s website.

As a sidenote, the website accepts you paying for the game in “good deeds.” You send Mcdaldno an email detailing some volunteering, social justice work, or donations you made and a game you want. Performing 2 good deeds gets you a pdf of Monsterhearts, 5 good deeds gets you the paper version. It’s a nice little system and I’m glad to see a game designer encouraging players to make a difference in the world.

Monsterhearts is based off the Apocalypse World system (with which I have no experience so I have no idea how similar or different they are). This game leads heavily toward the side of collaborative storytelling. Certain actions (NPC manipulation, turning someone on, attacking someone, etc.) require rice rolling to resolve. Dice rolling is always handled with 2d6s which you add a modifier to, but actually rolling them is fairly uncommon. In our 4 hour session, we collectively as a table of 5 probably rolled them 7-8 times. I’m pretty sure 1 or 2 players didn't roll dice at all the entire time. It’s more a game of creativity and roleplaying. In fact, clever players can maneuver and manipulate other players and NPCs into doing what they need without having to worry about the dice.

I recently purchased a copy of Monsterhearts and I’ll be performing a chapter-by-chapter review over the next few days.

Coming up next: What This Is and Chapter One: Creating Characters

What This Is & Character Creation

posted by Lady Gaga Original SA post Monsterhearts, Part 2: What this is and Chapter One: Character Creation

What This Is
In a short foreword, Monsterhearts describes the basics of collaborative storytelling, talks about Apocalypse World on which Monsterhearts is based, and discusses what you need to play (2-4 players, an MC/DM, 2d6 dice, pencils, and skins). What’s a skin? We’ll get to that in a moment.

Character Creation
Character creation in Monsterhearts begins with each player choosing from the skins. A skin is your character description and character sheet. Each monster type has a different character sheet. The MC should have a copy of each of the skins and lets players take a look at them before deciding. 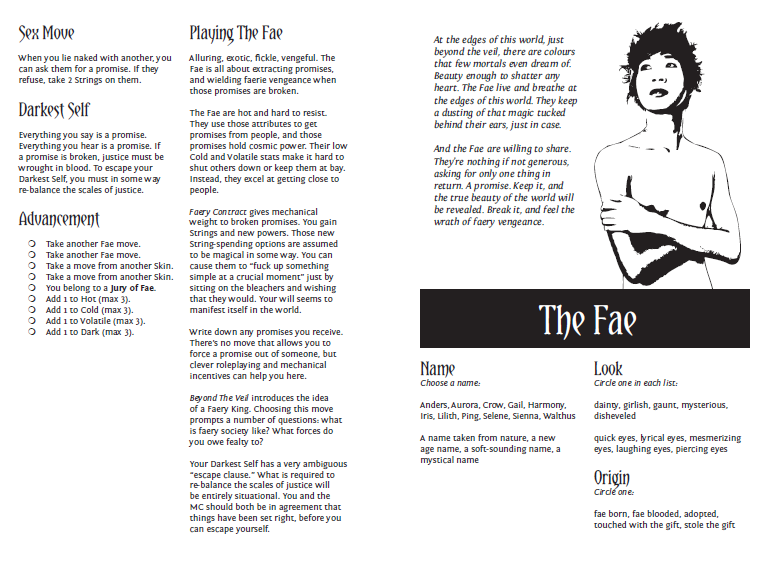 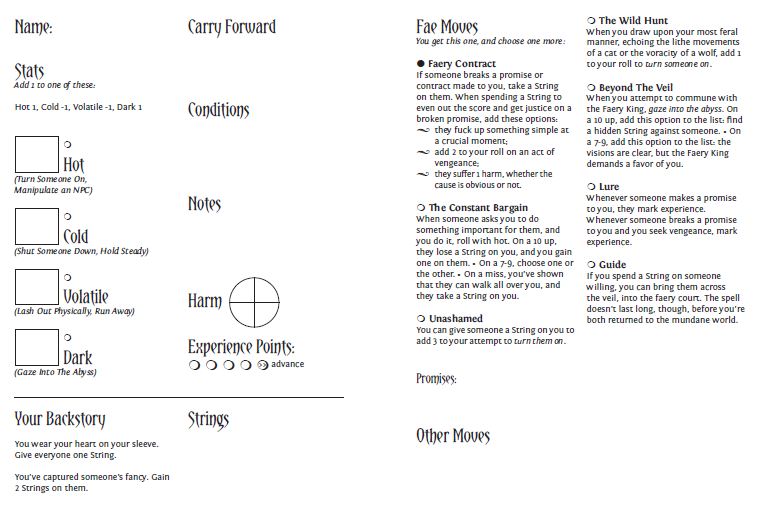 The skins available in the core set (I will go over the bonus skins later) are:
The Chosen: Buffy, the Vampire Slayer.
The Fae: I can’t think of a pop culture example of a Fae.
The Ghost: I’m going to quote The Ghost skin directly: “Ghosty ghost. You’re dead.”
The Ghoul: Again, too many zombie movies to name. Is there a zombie teenager movie? I’m not sure.
The Infernal: The Craft.
The Mortal: Bella from Twilight or Sookie from True Blood.
The Queen: Regina George from Mean Girls.
The Vampire: Sparkle magic time, Edward Cullen!
The Werewolf: Teen Wolf.
The Witch: Again, The Craft.

So a player chooses one of the skins (and generally only one person can play each skin—it’s more fun when you have variety!). Then you use the skin for the rest of the character creation process:
1. Choose a name. Your skin has a list of names to choose from or some ideas for how to make a name appropriate to your skin.
2. Choose an adjective to describe your character’s look.
3. Choose an adjective to describe your character’s eyes.
4. Choose an origin. Each skin has different origin. This can have a huge effect on how you roleplay the character. A werewolf that became one through a bit might hate being a werewolf and fight the animal inside. In contrast, a werewolf who was raised by wolves may embrace the wolf in them.
5. Stats. There are 4 stats: Hot, Cold, Volatile, and Dark. These numbers serve as a modifier that you add (or subtract) from relevant die rolls. You add 1 point to any stat.
6. Moves. These are your abilities or powers. Each skin has different rules for how you pick them.
7. Backstory. You take turns going around the table introducing your character and giving a tiny bit of background. The background determines who has “strings” on whom. We will talk more about what a string is later. For now it means that you owe a person something or a person has something that they can use against you.
8. The character with the most strings on you then chooses one of your skills, the MC chooses another. These skills are “highlighted” and will be the skills you earn experience off of.

Other things on the skin:

Sex Move
These happen when you have sex (or something related to sex) with someone.

Darkest Self
Your character taken to their extreme. This happens when you take a lot of harm or otherwise something really bad happens to you. Some characters can also activate their Darkest Self when other conditions are met. For a Werewolf, being in the Darkest Self may be great. For others, it might mean they really are in trouble.

Advancement
You earn experience points for using a skill based on one of your 2 highlighted stats. Every 5, you advance and gain something (more moves, better stats, etc.)

Playing The X
Each sheet has some thoughts on playing that particular character. It includes roleplaying tips and how to use certain moves to your advantage.

There's a few other things too that we'll talk about in later chapters.

Next up is Chapter 2: Playing the Game

In my previous section, I discussed character choices and character creation. Now we move onto actually playing the game. This section is long so I'm going to split it in two or possibly even three.

Monsterhearts is a game of talking, first and foremost. That means most of "playing" the game is going to be spent having a conversation between the players and the MC (the gamemaster). Dice are only rolled when a player character tries to do something beyond ordinary. Usually, play is divided into scenes.

Scenes
Just like in a movie, a scene is a setting where action takes place. Players might decide the scene or the MC may set the scene. For instance, Veronica might run into Sam in the parking lot on the way home from school (MC decided on the scene) or Aurora will mention how she is going to her play rehearsal after class (player decided). In either case, the MC will flesh out the scene a bit more. Players can help fill in the scene too. The MC mentions some of the NPCs who are in the play but another player may chime in that's he's also a cast member as well. So scene building is a collaborative process, but ultimate authority for how the scene is framed lies in the MC.

This isn't in the official rules, but sometimes minor scenes do not require framing in my experience. For instance, Sam is at home after school calling girls he likes. We don't need to set much of a scene. We can just go straight to the conversation.

Talking & Moves
Once the scene has been framed, roleplaying begins. It's a conversation. Players may speak in first person, or narrate their actions. Some players may talk over each other, while some other players may be quiet for that scene. That's ok. It's the job of the MC just to make sure everyone is getting a fair chance to do what they want. For instance, the MC stops Veronica after she finishes talking with Aurora to check in with Sam and see what he's up to.

Sometimes, what a player wants to do falls under a "move." This is when we break out the dice. Every roll is 2d6 and you add a relevant modifier to it based on what you are doing. 10+ is an unqualified success, 7-9 is a partial success, and anything lower is a failure.

Here are the 4 attributes and the associated moves as well as what they are used for in parentheses:

The best way to explain it is with an example: Aurora wants to flirt with Sam to get him to make her a promise. She rolls 2d6 and adds her Hot bonus (+2). She rolls a 7 and adds 2 for a total of 9. Because this is only a partial success, Sam gets to choose whether he wants to give himself to Aurora, make a promise, or give Aurora a string. He's head over heels for Aurora so he promises to do anything she wants.

Strings
Strings are an emotional tie you have with another person. Imagine it as strings on a puppet. If you have a lot of strings on a player, you have a lot of dirt on them or you know how to manipulate them. Likewise, if someone has a bunch of strings on you they have power over you. You can gain strings against other PCs and NPCs through character creation and moves. Then you can spend strings to do things such as:
When you spend a string, you erase it from your sheet and choose from the list of effects. But you also have to explain how the effect works in the story fiction. To go back to our example of Aurora and Sam, Aurora uses a string she has on Sam to offer him an experience point to spy on Veronica. She does this by flirting with Sam, promising to help him with his pesky virginity if only he would find out if Veronica has been saying mean things behind her back. Sam happily agrees.