Being a teenager.
The first flush of true love.
The danger, the horror and the allure of the supernatural...

The Silver Kiss of the Magical Twilight of the Full Moon


Jenni Dowsett does not know the meaning either of "desperately" or of "serious". (Or, really, of "game".) "The Silver Kiss of the Magical Twilight of the Full Moon", hereinafter SKMTFM, is a 40-page document, of which two are cover and credits, two are game fiction and art, four are "recommended reading", five are a sample adventure, and twelve are character sheets and other handouts (four copies of the character sheet plus two pages of "emo quotes", with decorative pages for the back of each). That leaves 15 pages for rules on minor things like character generation or running the game. It's a good thing this is a very rules-light game.

Page five lists what you need to play this game. Scrap paper, pencils, a single d6, four friends, and "a place to play the game". Oh, and a supply of chocolate. (I'll explain later.) Also recommended are magazines to cut character pictures from; instead, I'll use the Internet.

By page seven, we've gotten into chargen. First, we have to pick out supernatural creature type. Thanks to Mors Rattus, we're going with the gill-men, the fish-fae, the Atlanteans. This being sparkly vampire genre, we're having them look like the movie version of Abe Sapien . Next, we have to come up with the rules of our supernatural creature type. Or, as Jenni puts it, "Get them to make a list of about five basic rules, make sure that they don’t get so silly that the game will be hard to play." There's a few other bits like that throughout the text where it's obvious nobody copyedited this.

Next up, actually generating characters. We need a pair of lovers, one human and one supernatural. Then we need a best friend for each lover. You pick a secret agenda from the list for your character type. (The text emphasizes that even though these are 'secret agendas', they're supposed to be playing them up to the point where it's obvious to everyone.) Then you pick a famous actor who would play your character (hence the magazines), a name, and four adjectives to represent your character's personality; like aspects except boring.

None of these have any mechanical effects. However, there are four stats. You get four numbers (2, 4, 6, and 8) and assign them as you like to the stats; higher is better. The stats are "Coping", "Pretty", "Bad ass", and "Emo Quotient" (seriously?).

On page 8, it says "In game terms whoever has the highest stat in the relevant attribute wins. As Game Master (GM) you can use the stats to gauge whether or not characters succeed at things that seem tough for them to do." On page 12, however, it says "In general you can let the characters succeed at what they want to do, especially if it makes the plot more dramatic. Your role is to, as much as you can, bring in a downside to their success." So which is it?

Later on page 12, it gives an example of using stats: when one player opposes another. The person with the higher relevant stat succeeds. If they're tied, each player rolls a d6. If they're still tied, the GM picks. (Why not just roll again? Why not play rock-paper-scissors? Who knows!)

Yeah, those stats don't have much to do with their adjectives, do they? Well, anyway, let's fill out the charsheets. 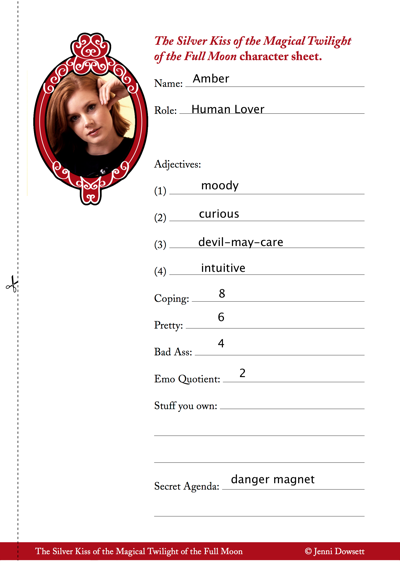 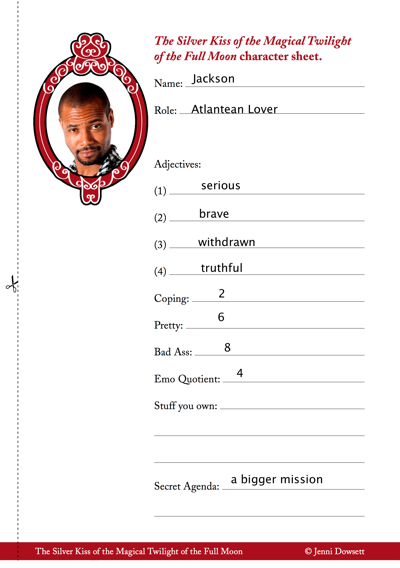 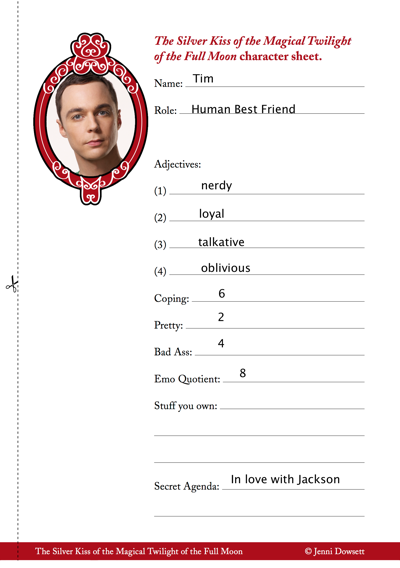 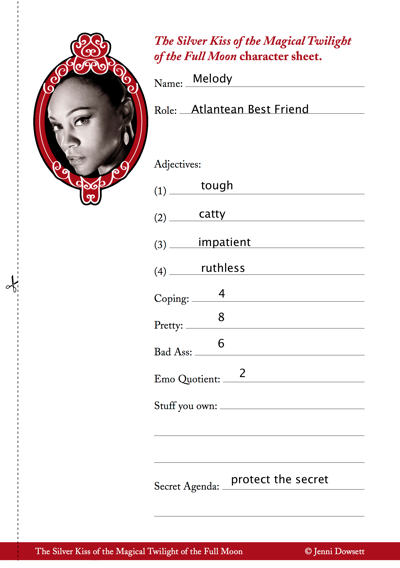 There's no rules or even suggestions on filling out "stuff you own", and since we're not playing a real game of this anyway, I'll just leave those blank.

Next time: playing the "game"!