The Morrow Project by Humbug Scoolbus

posted by Humbug Scoolbus Original SA post The world ended in 1989 and I'm just hearing about it now?
Presenting The Morrow Project

1980 was a simpler time with simpler games right? Wrong! It was at the dawn of the Tabletop RPG age and the RPG age in general. All sorts of weird concepts were being thrown around and most of them came from the midwest United States.

an excerpt from an interview with Dockery in 1999
How did The Morrow Project game get started?
After joining the Science Fiction Club at Oakland University, I (Kevin) was introduced to Richard Tucholka and Robert Sadler. Richard and Robert were experienced RPG players and asked me if I'd like to play a game. I did but felt there needed to be some guns involved... After reading a short story written by Robert, I challenged my college professor to let me come up with a synergistic real world / fantasy damage system based on logic. In other words, I found a way to gain course credit, go into the publishing business, and lead the third generation RPG's with the often imitated Morrow Project. The game still spawns conventions and has players through out the world even after being out of print for over sixteen years.

So what's it about? It really is probably the second apocalyptic RPG ever written (Gamma World being the first) as it beat FGU's Aftermath to sale by at least a year. Unlike Gamma World or Aftermath it tried to stay as scary real world as possible. Anything that wasn't reality based probably came from Tucholka. Anyway, let's see the intro section...

So there's that.
Next time we'll get to nuke some cities. I am taking requests...

Let's Have A War!

Let's Have A War!

The Third World War started on November 18th 1989. You didn't notice it? Strange, I thought everybody was involved. Anyway War Games totally ripped off the plot. Apparently a NORAD (Remember them?) first strike was launched against the Soviet Union when a training simulation was accidentally fed into the main DEW line radar feeds.

Due to the complete surprise, the US strike managed to knock out the majority of the Soviet missiles, but that's okay, they had spares. The rest of the world decided to play 'me too!' and wouldn't you know it, the war was over in a day or so with no winners. Within six months, 90% of the world's population was dead and American Idol had never been created.

The game actually has three and a half pages of nuclear strike locations in a nice table organized by state. The table lists the type of weapon used, target type if not a city, nearest town, and target name. Most of the votes were for targets already on that table. There are also nice tables describing blast radii for different types of warheads (including MIRVs and Bioweapons!) 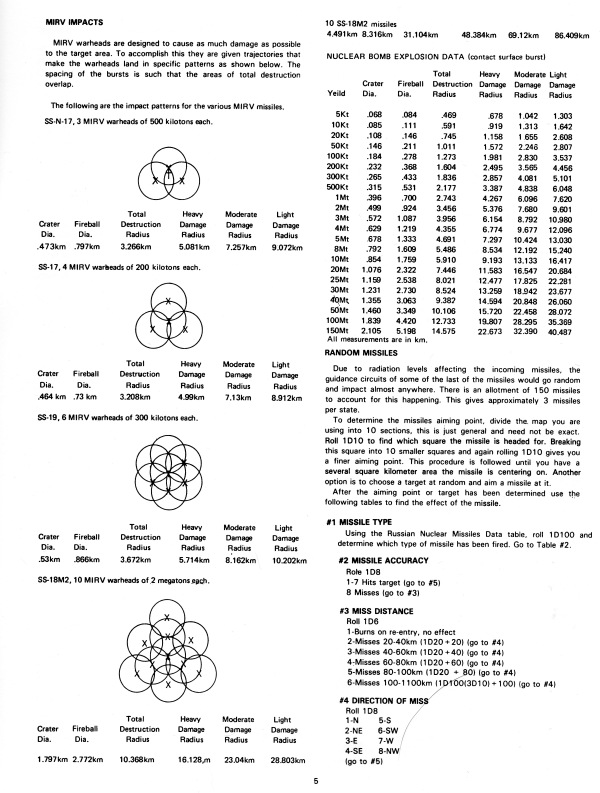 The rules also say that there were a 150 wild card missiles that you can launch wherever you felt like. Okay, first target Branson.

Bomb #2 is headed towards Marquette Michigan.

Step 4. Direction of miss on a stand d8 scatter diagram is a '6' which is southwest. Hmmm, looks like Branson got hit again! Sucks to be a country/gospel fan I guess.

Step 5. Bomb Effect is another Ground Burst so the Counties north of Branson are now sucking too.


Also in this section are rules for some lovely diseases like Lugo Fatigue, September Fever, and Toledo Infection, for a bioweapon laden munition surprise along with chance of mutation over the 150 years since it was dropped. Then comes a Rad exposure table that looks like it was cut and pasted from an Nuclear Regulatory Commission pamphlet and probably was. Then rules for shielding, radiation damage, and mutations which mainly suck and don't give you laser eyes.

The next section is character creation. Oh joy.

Making a hero or just saying fuck it...

Using those criteria, the original character generation system for The Morrow Project was ability based. It had seven stats all rolled on 4D6-4 giving a range 0-20 per stat.

The stats were pretty familiar: Strength, Constitution, Dexterity, Accuracy, Charisma, PSI, and Luck. There was no Intelligence stat as the rules stated...

The Morrow Project has never had an "Intelligence"
roll or an Intelligence listing In a character's
basic statistics. It was Intended the player supply the
INT of the character, as the player must, whether or
not there is a die roll for it.

Sp were allocated by a percentage system (this is probably the second or third appearance of locational damage. Runequest and Arduin Grimoire are pretty close to being tied for second and TSR had a product called Bio-One back in '77 or so that was nothing but a hit location system and I think it was the first). The MP character sheet had a large section to be filled out. Also on the sheet was a space for Bp to be written down and the character's blood type to be recorded. The type being generated from yet another table.

The next figured statistic was Movements. These were based on the character's Dexterity and were the amount of time a character could perform actions in. Different actions required different amounts of Movements. Moving, Drawing a weapon, Firing a weapon, Reloading a weapon each cost 1 Movement. Opening a door or loading a reveolver cost 2 Movements. Reloading a TOW Antitank missle launcher cost 6.

The final figured stat was Endurance which waqs figured as Constitution x Dexterity. Every time a character did anything except rest, there was an Endurance cost. One per combat round or 1 per normal turn.
NOTE: No where is it stated how long a normal gameturn is in the rules. In fact the only places it's mentioned are here and in the movement speed section.

Now let's talk about PSI...Better yet, here's the table. 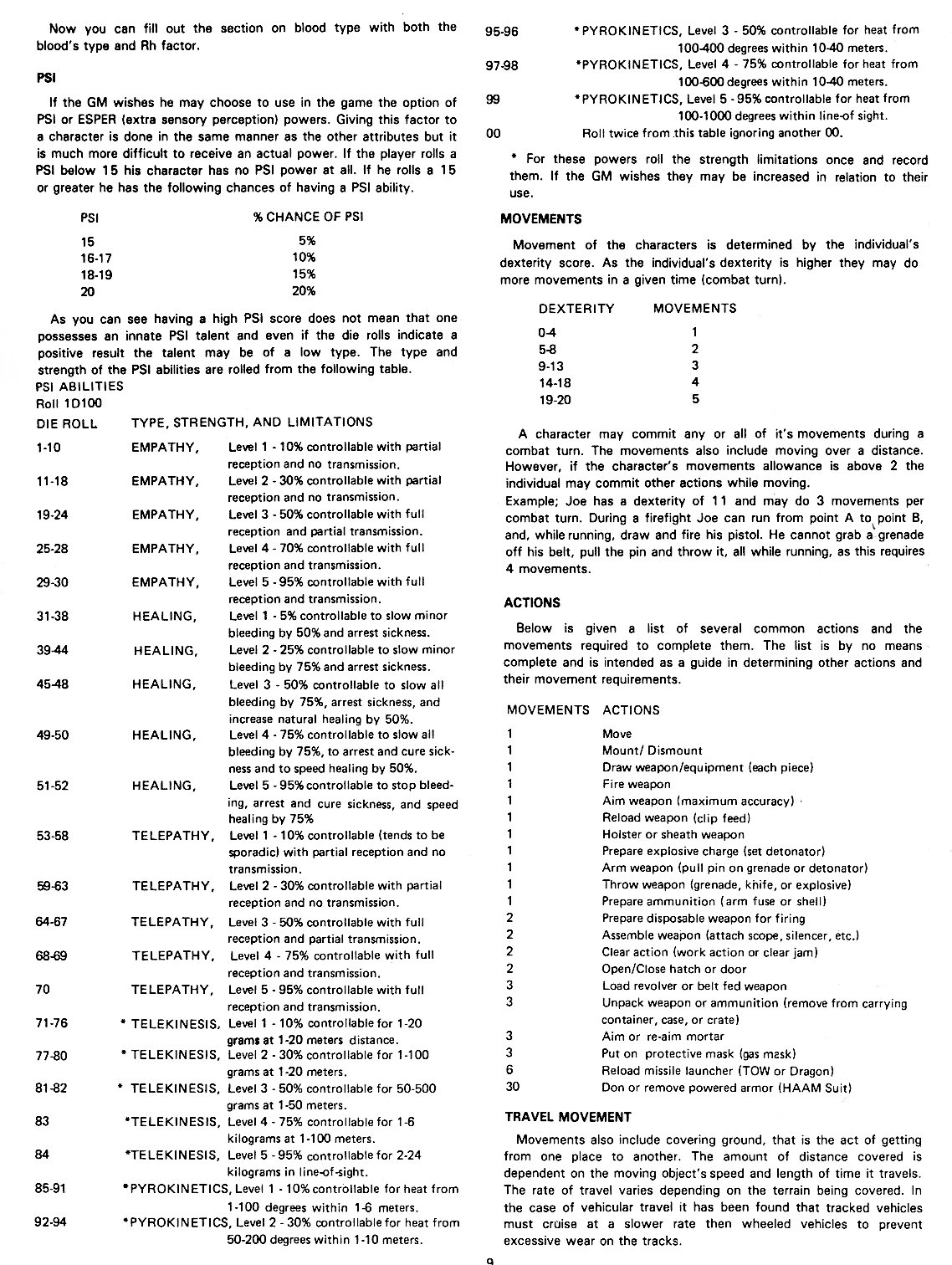 Notice anything unusual? How about the fact that it requires two checks to get any psychic powers? This does make some sense as Sadler and Dockery were going for realism over science fiction.

And that was your character done. Here's what the empty character sheet looks like. The back was all for your equipment. There is something missing however that almost every other RPG has. Now what could it be? 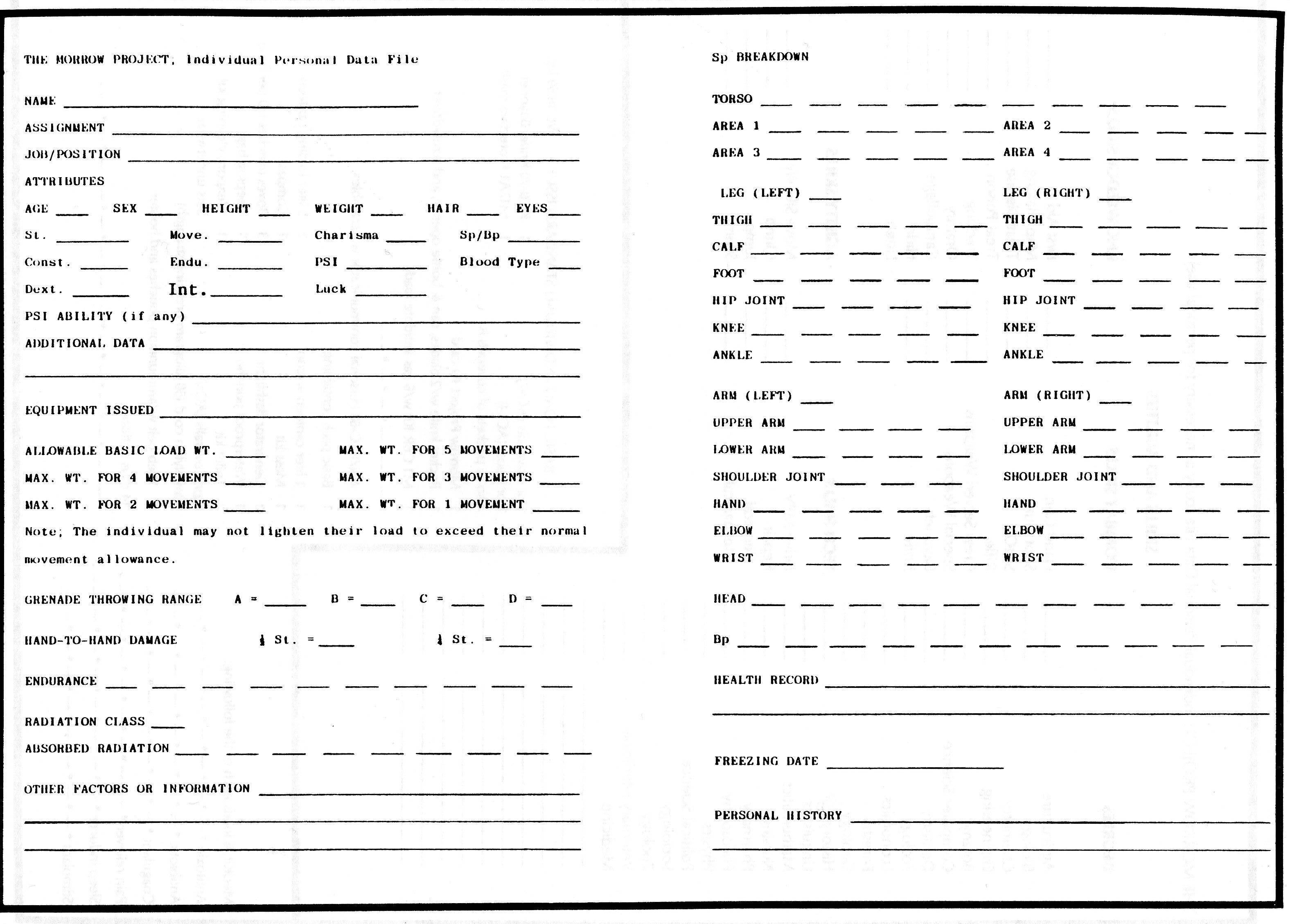 Next time, the Expanded Character Generation Rules and things that go bang.