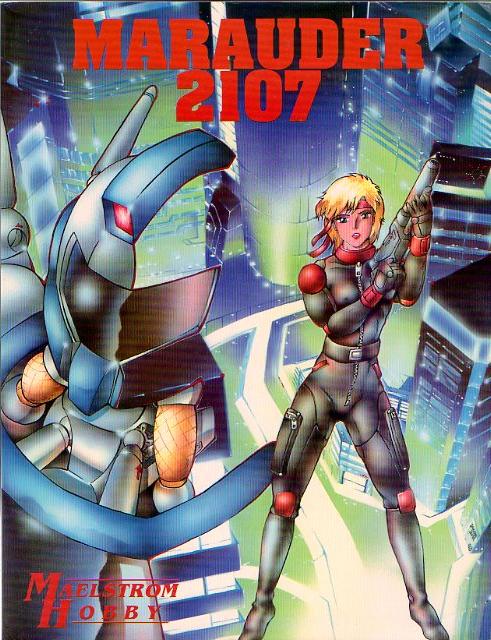 As June has been dubbed month of Mecha...let me introduce you to a game that I haven't seen mentioned here.

This was published in the early 90s by Maelstrom Hobby, and the second printing was released in 1994. The most recent supplement (Breeder Compendium) was published in 1995, so it's probably safe to say this game is well and truly dead.

As you can tell by its cover this is an anime influenced game. This isn't necessarily a bad thing. The back story is a little different than what you might expect from that art...

The game world's history starts (as the introduction states) in the early decades of the 21st century. Nations watched helplessly as overpopulation and staggering rates of unemployment. Global warming was playing havoc with the crop yields of third world countries and famine was spreading on a massive scale. The first world countries were having problems of their own and were unable to assist the poorer countries leading to riots and government turnovers in those smaller lands.

In 2004, civil uprising's in the Russian Commonwealth allow Russia and the Ukraine(

) to seize control of the governments of the rest of the former USSR members. After a 19 year beatdown and two civil wars, New Russia is formed under a non-communist military dictatorship.

) scientists developed and accidentally released a viral mutator, that promptly began altering all life on the Australian continent at a genetic level. The plucky and heroic Australians quickly slapped their whole country under quarantine until they could get theis small problem under control.

By 2013, pollution and global warming had fucked over everybody's crops in a period called 'The Great Wasting'. The American midwest was screwed and world crop supplies dropped by 38%.

All the South and Central American drug cartels who had taken over their respective countries, banded together in a Coalition called the Southern Cross Nations (SCN). They traded drugs and food to the technically superior(but starving) nations for materials and tech.

The United Nations had collapsed in 2020 and the EU became the European Commonwealth (EC)as parts of North Africa were assimilated under the infamous Treaty of Brussels. Germany is in control...finally.

In 2023, New Russia (NR) has finally gotten its collective shit together and is now back as a major international player

Japan gets hosed in 2027 when a series of massive earthquakes begin. Starting with with a 'minor' 6.7 and having at least one 5.0 per week, they finish off with a rousing 8.3. Making the islands look like they have been the recipient of a giant lizard attack.

2035 is when the SCN, EC, and NR get together as mutual trade buddies followed by 2037 when the US stock market collapses and Washington DC declares martial law. In 2044, there is 41% unemployment in the US. Canada isn't in much better shape and the two countries form the Western Combine for mutual survival. Following suit, Japan, China, and Korea form the Eastern Alliance(EA) even though they still hate each others guts, but with the massive (and comparatively rich) NR on one side of them, famine destroying China's population, Japan's wrecked infrastructure, and Korea's lack of resources they really don't have much of a choice.

In 2050 a French research facility had a bio-weapon leak and killed or crippled almost a million people. Fuck the French.

NR was bored so they decide to invade the EC in 2055. Nobody could afford to help the EC (or really wanted to to be honest) so by the end of the year there was no EC anymore only NR, including Britain and North Africa. The remaining nations in Africa freaked out about this naturally, and bonded together as the (non-Rifts) Coalition States.

In 2059 some still unidentified terrorist group nuked a political convention in Washington causing almost a million casualties and wrecking the Cherry Blossoms.

Japan leaves the EA in 2068 and after finally finishing its rebuilding efforts and is immediately boycotted and placed under a program of sabotage and industrial espionage by Korea and China in revenge.The US is forced to 'sell' Texas and New Mexico to the SCN in exchange for guarantees of food sales. Refugees from the two states flood into California.

The world economy finally collapsed in 2081 and a lot of smaller nations simply vanished as political entities. The larger groups managed to ride it out, if not pleasantly, and began snapping up land wherever they could.

In 2085 the Middle East went nuclear. Nobody goes there anymore.

And in 2091 the NR invades a weakened China. Tactical nukes are used and people die...a lot.China launches attacks on the NR's major cities...Moscow...Paris...Belgium(

That brings us to 2093...the 13th President of the Western Combine, Reginald Montgomery, snaps due to the SCN beginning to invade and grab WC territory. Believing in the 'If I can't have it, nobody can...' pre-school philosophy he launches all the remaining nukes in the old US arsenal at any convenient target.

Shit gets fucked up.

The last chapter was titled Historical Perspective this one is titled Background as it has to do directly with the situation the characters find themselves in.

As you will remember the President of the Western Combine (WC) went batshit and launched the nuclear arsenal basically at random in 2093. To be fair he was being invaded at the time.

The next year, as Japan was still, reeling at the Akira-11 Bio-research facility down in southern Honshu, the bio-engineered subjects of PROJECT:DOMINATION boke out of confinement and take over the complex. Led by retired General Tetsu Yamada, these 500 soldiers who were all augmented to survive a nuclear battlefield, took control and slaughtered all the normal humans in the area.

In 2095 a Yakuza lord began recruiting the displaced residents of Aomori Prefecture into the first of what became known as a 'Newlord Community' Shining Light City, supplanting what was left of the local government. In 2096 a crashed WC aircraft was discovered carring over a hundred armored men that had been ravaged by some engineered virus. and in 2097, Citystate Pacifica opened its doors.

Poseidon GeoFront Citystate Pacifica (an arcology concealed in what had been Nikko National Park and not mentioned in the game book until this time) opened its doors for the first time in 70 years and found that it was in the middle of a 450 square mile sprawl of interwoven cities, towns, and villages. They immediately began exporting medical tech for food and soon the whole area was considered Citystate Pacifica: Core and Fringe.

By 2098 there were 21 Newlord Communities in the three northernmost prefectures (Aomori, Iwata, and Niigata). Kuniihiro Tagachi of Shining Light City suggested that since the elephant with the high-tech (Citystate Pacifica) had just shown up, maybe they should band together in case the elephant felt expansionist and wanted their land. So was formed the Northern Alliance for Shared Defense and Economic Protection.

Remember that bio-facility that got taken over by the experiments? By 2099 the Breeders, as they have been deemed, have increased their population to around 10,000 in Southern Honshu. They are living within the Hiroshima, Okayama, Shimae, Tottori, and Yamaguchi Prefectures and seem to show no signs of conveniently dying out. A Citystate Pacifica heavy scout team managed to bring some back for desiction and found that they are gender non-specific and have a non-standard means of reproduction.

Conflicts between humans and Breeders escalate as the engineered creatures start moving northward, wiping out two Newlord Communities by 2102 and chasing the remaining humans in Osaka Prefecture away.

CP isn't having a great time either as a 10 man squad in MAR and armed with normally vehicle mounted chainguns attack Bannin-Prime, the central datastore for the arcology. After a massive firefight in which 9 of the intruders are killed along with a lot of Core police officers and more than a few civilians, the surviving terrorists suicide after informing the police that this is only the beginning. Bannin-Prime is not seriously damaged and is soon back to full operation.

And in 2105 it is discovered that some Breeders are being outfitted with cybernetics. 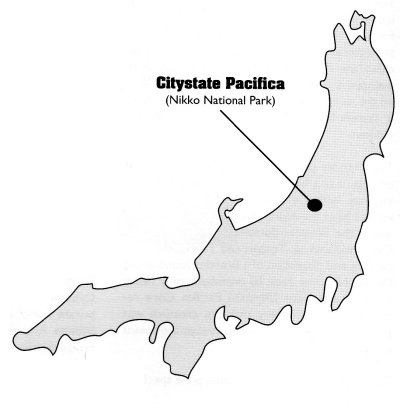 The Wasteland is pretty much the entire island of Honshu. It got seriously nuked in 2093, and those blasts to the perpetually tectonically active island caused massive quakes and even reactivated a few volcanoes. There are a few new mountains, sinkholes, and general rearrangement of terrain features which adds to the shitstorm the residents find themselves in. The fucking up of the climate has caused basically non-stop severe weather patterns off the coast so getting on and off Honshu is pretty much not possible for the average (i.e.not completely insane) person. The good part is that the latent fallout from China and Russia is routed south to Breeder territory!

Poseidon GeoFront Citystate Pacifica was created as a last-ditch fallback by the Japanese government as the world was quickly turning to shit in the early 2000s. It was finished in 2021 and was sealed up with its population in 2026.It stayed sealed for 71 years and is seriously high-tech. The Core has a current population of abot 93,000 and the Fringe has basically no census info, but it is in the millions among its 8 districts.

The Core is all shiny happy planned community, while the Fringe is Grimdark Cyberpunk, metal, kill kill kill,

Newlords run most of the human communities outside CP. They're basically warlords who just want their people to survive and be reasonably prosperous. They are the ones that are taking the most consistent thumping from the encroaching Breeders.

Nomads roam the Wasteland looking for food, gear, and not dying. They are scavengers and looters mainly, so everybody tends to shoot at them.

Well now...After the little accident in Australia which caused the ENTIRE FUCKING COUNTRY to be quarantined, there was a moratorium placed on a lot of genetic research. Japan said Fuck y'all to this little bit of international law, and kept on trucking. This is how Breeders were created. 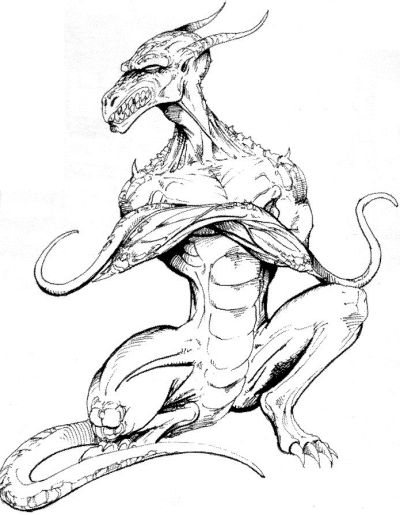 That is a Breeder. 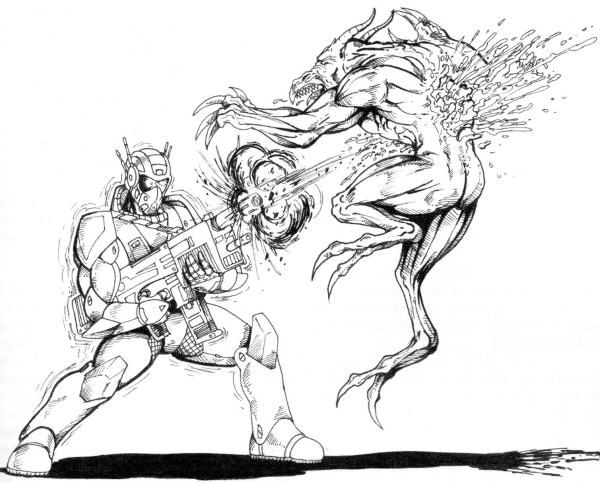 That is how most 2107 era Japanese would like to see a Breeder...any Breeder...all Breeders.

They are faster, stronger, tougher, and nastier than any human and reproduce by directly implanting a sample of their genetic material into rotting corpses. They also have human level intelligence and mutate easily.