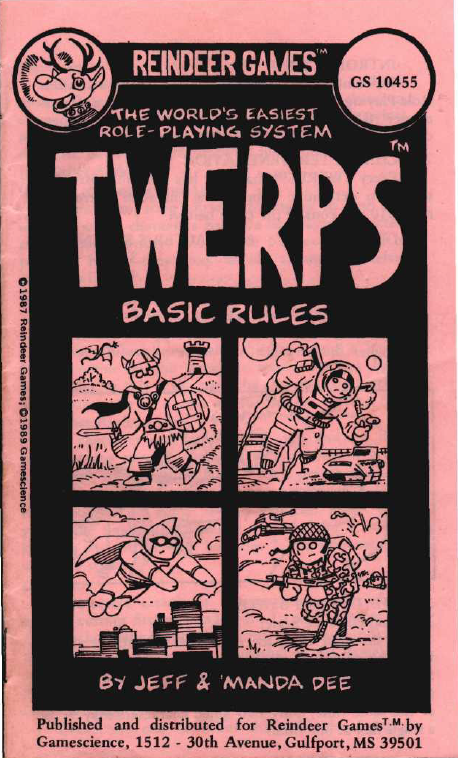 TWERPS is a game written by Jeff and Amanda Lee, and published for Reindeer Games by Gamescience. The first edition of the game dates back to 1987, with later editions available as PDF scans from DriveThruRPG.

That's the one stat that any character has.

Whenever a character wants to do something "too difficult to be a sure thing", they must make a Saving Roll. They roll a d10, and add their Strength. If the result is higher than a target number set by the GM, the character succeeds.

Whoever has the highest Strength goes first. On a tie between players and NPCs, the players always goes first.

A character can move a number of spaces equal to their Strength. They can move up to twice that speed if they give up their attack (or other action) for the round.

Engaging an enemy in hand-to-hand combat means entering the same hex as them, and entering a hex with an enemy in it completely stops movement. You cannot leave the hex unless you have hit the enemy on the previous round, but were not hit back. If that happened, you can move out of the hex up to your normal speed, but you give your attack/action for the round.

To attack a target, roll a d10 and add your Strength. The defender does the same. If your result is higher than the defender's you score a hit. A normal, bare-handed attack deals 1 damage, which reduces the defender's Strength by 1.

When a character reaches 1 Strength, they are unconscious and cannot fight, unless someone uses their action to awaken them.

When a character reaches 0 Strength, they are dead.

Armor provides a bonus to the Strength rolls you make when defending, making you harder to hit. Examples from the book include Leather armor for +1 to defense rolls, Chainmail for +2 and Platemail for +3.

You cannot shoot a ranged weapon at a target in the same hex as you, and you take an attack roll penalty equal to [range to target / 3], rounded down.

After combat, any characters who are still alive may restore their Strength scores back to full. The book alludes to how you might prefer to impose some distinctions between character that have taken major wounds/injuries versus lesser ones, implying that the former should take longer to recover from and therefore longer for full Strength to come back.

After every battle, each surviving character gains one Victory Point. A character's Strength can be increased by 1, at a cost of a number of VPs equal to the character's current Strength.

This is not explicitly mentioned in the book, but based on my research, most players assume that their characters have a class/profession/job, and that they are conferred a bonus on their rolls whenever that descriptor comes into play.

A game set in a Traveller-like sci-fi setting might, for example, have a Diplomat character with a +2 to all Saving Rolls involving talking to and persuading people, or an Army serviceman with a +1 to unarmed combat and physical prowess rolls, or a Pilot character with a +2 when driving a plane/spacecraft, and so on.