The next parts of Adventure Fantasy Game are going to be long and fairly standard, so I wanted to knock something nice and short and in keeping with the Kevin Crawford power hour 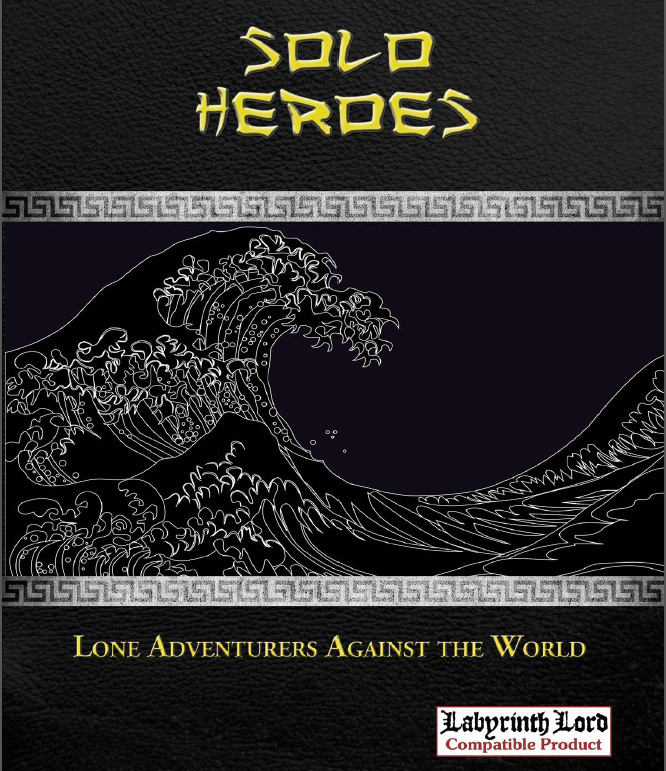 Solo Heroes is a free supplement for Labyrinth Lord released by Kevin Crawford in 2014, as a sort of preview to Scarlet Heroes. It's a set of rules you can layer on top of Labyrinth Lord or any other OSR game in order to make the game more friendly to running an adventure/module with just a single player-character without the GM needing to significantly rework the adventure as-written.

Further, an effect such as a trap or a scripted spell that deals a flat amount of damage instead deals 1 damage for every 4 points noted in the text. Anything that deals less than 4 damage doesn't even scratch the Solo Hero

Damage taken by the Solo Hero subtracts from their Hit Point count. If an Orc with a 1d10+2 Greataxe rolls a 6 for damage when attacking our Solo Hero with 10/10 HP, our Solo Hero would be down to 8/10 HP after the attack.

However, damage dealt by the Solo Hero kills off an entire monster Hit Die per point of damage dealt. If our Solo Hero with a 1d6+1 Short Sword rolls a 2 for damage when attacking an Orc with 1 HD, he kills the Orc straight dead with that one attack.

This rule also adds a new feature for Solo Heroes, called the Fray Die . The Fray Die is simply a damage die that the Solo Hero can roll every turn to attack enemies with equal or less Hit Dice without needing to roll to hit. If our Solo Hero wants to attack normally, then they do get to make their attack on top of rolling the Fray Die for even more damage. The Fray Die is supposed to represent "mighty hewing, punching, kicking, biting, object-hurling, and other assorted fisticuffs or short-ranged combat spells delivered toward an enemy that does not clearly outclass them in skill."

The other thing to note is that Solo Heroes do get to roll their Fray Die even if they did not make an attack roll that round, to represent the havoc they might be wreaking even while, say, opening a stuck door or backing up a corridor.

Fighters roll a 1d8 for their Fray Die, Clerics, Thieves and "other non-strictly-martial-classes" roll a 1d6, while Magic-Users and other spellcating classes roll a 1d4.

The final note for this rule is that any damage dealt by the Solo Hero can carry over across multiple targets. If our Solo Hero rolls a 10 for their damage, then they could kill 4 different 1 HD goblins with that single attack, provided that the attack roll could have hit the AC of all the targets. The same applies to Fray Die, on top of the fact that a Fray Die's damage does not need an attack roll at all (although you cannot use a Fray Die against an enemy with more Hit Dice than the Solo Hero). The only time that this "cleave" feature doesn't apply would be if, for example, our Solo Hero is attacking with a melee weapon and one of the potential targets is supposed to be way out of reach, such as on a high balcony.

[In Scarlet Heroes, there is a note for Magic-Users that they can always shoot an enemy with their 1d4 Fray Die, as the assumption is that they're using bolts, rays and other magical projectiles to destroy their enemies at range]

This is just the inverse of the second rule: translate the roll of any healing effect according to the First Rule, then it restores that many Hit Points to the Solo Hero. If the Solo Hero rolls a 6 when they drink a 1d6+1 Healing Potion, they gain 2 HP.

Further, a Solo Hero can take 5 minutes to bandage their wounds and catch their breath after every encounter, and this will restore up to 2 HP, but never more than what the Solo Hero began the encounter with.

Since OSR adventures tend to have "save-or-die" effects and traps and whatnot, and since the prior three rules still don't guarantee victory in combat situations, Solo Heroes still need a way out.

Whenever the Solo Hero is confronted by a situation that might otherwise kill them, they instead Defy Death: roll a number of dice equal to the player's level, and then translate that into points of damage. If the damage would be enough to reduce them to 0 HP, then they are instead left at 1 HP. Anything that takes the Hero to negative HP can still kill them, otherwise they just take the damage. The die size used in the Defy Death attempt starts at 1d4 and goes up to the next size for every succeeding Defy Death attempt in the same session adventure.

Example: Our level 3 Solo Hero with 19/21 HP fails a Save vs Poison, which the adventure text says is supposed to kill them. Instead, the Solo Hero rolls 3d4, and they get an 8, which translates to 2 damage. The Solo Hero takes 2 damage instead of completely dying and so if left with 17/21 HP. The next time they need to Defy Death, they're going to roll 3d6 instead, and then 3d8, and so on.

This is also supposed to cover situations that are "unsolvable", such as an altar protected by a magical ward that the adventure says should be dispelled by a Magic-User, or a killer trap when the Solo Hero isn't a Thief. If the player can't get through such barriers by any other narrative means, the GM can make the Solo Hero take a Defy Death attempt as a cost to bypass it.

The Fifth Rule: Experience and Henchmen

Simply put, a Solo Hero only earns 25% of the experience from any kills, treasure or quest reward, to account for the fact that such rewards are usually scaled to be divided up between four or more players.

If the player wants to bring henchmen along with their Solo Hero, the henchmen are to be treated as monsters: any damage dealt to them converts into full HD, so a 2 on an Orc's damage roll can kill a 1 HD footman. The idea is that the rest of the rules are supposed to buff up the Hero enough that they shouldn't feel the need to bring henchmen at all, on top of avoiding the book-keeping overhead of managing henchmen when it's just 2 players at a table.

Finally, there's a fairly obvious warning that using these rules when you have multiple players may trivialize the content.

What it all means

These rules are intended to address four main issues when trying to run an OSR adventure with just a single player-character:

1. Hit points deplete too quickly - now monsters will kill players much slower; they might need to score 3 to 4 successful hits as opposed to just one or two
2. Enemies don't die quickly enough - a player will, on average, be able to kill off 1 HD worth of monsters every round just via the Fray Die
3. Instant death and incapacitation effects can wipe out lone heroes - the Defy Death mechanic will prevent instant and unavoidable game-overs, but without letting the player just brave them blithely nor asking the GM to make up rulings on the spot, since they now have a firm framework to adjudicate the effect of a spiked pit
4. Lone heroes lack the wide range of skills and abilities possessed by a party - as I mentioned in The Fourth Rule, a Defy Death check can be used to get through an encounter that demands a particular class, skill or spell when the player doesn't have it, but such a bypass is never for free

If the player wants to play their Solo Hero through multiple sessions/adventures/modules, then the GM might want to make additional adjustments to better ensure survival.

First off, players start with maximum HP for their level and class.

Second, hitting zero HP never means death. It might mean getting knocked unconscious, or being left for dead, or being able to escape the battle through an unlikely plot contrivance. If the Solo Hero was on a time sensitive quest, then being defeated and thrown out of the dungeon might mean failing that quest, unless the hero perhaps chooses to instead be taken captive so they can continue the fight from inside the dungeon, provided they can facilitate a breakout of some form and are willing to give up their inventory (until you can retrieve it, FPS-style)

The author mentions that these rules should work just as well when playing other OSR/retroclones, specifically the author's own post-apocalyptic Other Dust and sci-fi Stars Without Number systems. [In fact, a supplement similar to this one exists for Stars Without Number - Mandate Archive: Stellar Heroes]

However, significantly different systems might give level 1 PCs 12 HP or more, at which point it's recommended to revise HP gain per level to a maximum of 10 for the toughest archetypes, and perhaps a maximum of 4 per level for less martial characters. The other note is that games that award additional attacks-per-round might be better converted into a larger Fray Die size or additional Fray Die rolls rather than additional normal attack rolls.

If normal initiative rules are followed, and the Hero rolls badly on initiative, and a (half) dozen goblins all get to take shots at the Hero before the Hero gets to react, the Hero might still be taken down rather easily even with the reduced damage intake of these rules. The optional rule therefore is to simply let the Hero always win initiative except when narratively special. Not only will this prevent hordes of monsters from killing the hero without a chance to respond, it'll give the Hero the respond with "discretion is the better part of valor".

In cases where the Hero really does flub his way into an ambush and gets walloped? Defy Death applies.

Giving players additional Fray Die rolls is mentioned as an additional tool that the GM can leverage whenever circumstances permit. Whereas a GM in a "normal" game might give a player a bonus to their attack roll for having the high ground or attacking from stealth, it might translate to extra Fray Dice in a Solo Heroes game.

One Pair of Hands

Since adventures are written with the assumption that they will be played by multiple players, some "puzzles" or encounters in such adventures might assume players being in two places at the same time, whether in the form of two levers at opposite sides of a room that need to be pulled simultaneously, or a wilderness that'll spawn random encounters for parties that don't have anyone standing watch.

It's recommended to either modify these encounters to be doable by a Solo Hero, such as moving the levers next to each other or assuming that the Solo Hero's keen senses can catch any night intruders. The assumption is that avoidance in hardship/difficulty by handwaving away such issues is more than made up for by the other difficulties inherent with just a single character in play.

The supplement then closes out with a short, 2-page, 9-room dungeon for a level 1 character called The Yellow Toad God's Well

So there you have it - something that could potentially let you run through, say, Keep on the Borderlands with just you and one other friend, sibling or significant other. Translating the damage rolls into yet another number might take a bit of getting used to, but since you're only playing with just one other person the rest of the overhead is much lower too.