Call of Cthulhu: Pursuit to Kadath by GorfZaplen

So I found a thing. 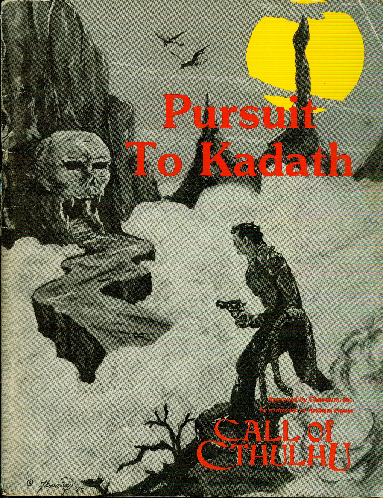 Check it out. 1983, Call of Cthulhu, some guy with a whip or rope or something, clearly an adventurer, and a freaking skull cave . What does the blurb on the back say?

This volume is designed specifically for use with Call of Cthulhu Chaosium, Inc.'s fantasy role playing game based on the works of H.P. Lovecraft. It will allow the Keeper of Arcane Knowledge to stage vividly realized adventures for the Players. Illustrations, maps and photocopy-ready props are provided to add flavor to the bizarre adventures that await in PURSUIT TO KADATH

How would you like to learn about this adventure? As the players, or as The Keeper of Arcane Knowledge? Eventually both will be covered.

So, the player characters are students at Miskatonic University. We are told that each character should roll for the level of wealth they come from. Our group consists of, uh,

Elsie Miranda, a student of...

Because she is Middle income she is at most "Well-dressed" Okay, then. I'm going to say Elsie is sort of down to earth and is Sensible in her dress. She'll be an Anthropology student.

Holy shit, this book produces living quarter descriptions and entire course tracks and course descriptions. We have the entire Spring 1923 Miskatonic U course list at our fingertips. Verisimilitude , man.

Okay, then we'll have Joel Fry, who is Poor . His tuition/board is paid by scholarships and grants. He has (1d6) $3 of pocket money each week. He too is sensibly dressed. I guess he'll be like, an English student?

Levi Santos is a Middle Income student who is Well Dressed. He's like, into biology or something, I guess.

Finally we have Ray Savage who is (1) PENNILESS. He has no pocket cash and his tuition/board was paid entirely by scholarships. He's a student in Chemistry, I guess.

Miskatonic is a high class Ivy League school, so these folks must be pretty darn smart to get in largely by their own work.

This book is just filled with incidental pictures of fucking nothing.

Anyway, our heroes are in the Sunday Club, which is an esoteric club that has fun with paranormal stuff.

Oh man, this just isn't going to end well, is it?

March 16, 1923
Anyway, their friend Patricia Duprey, daughter of the head of Anthropology at Miskatonic U VINCENT DUPREY, has invited them over to like, do stuff. Another of their friends, Sally Garfield, decides to hypnotize the PCs and their friends, including Nils Lindstrom, and other people who I just made up such as Colton Kirk, Blaine Carlson, and, uh, Hung Miranda, no relation to Elsie. Nils Lindstrom is apparently super susceptible to hypnotic suggestion, and like 30 minutes are spent humiliating him in his hypnotic state and making him do monkey dances and shit because Sally is apparently a huge bitch who has it out for Nils and god damnit, this is an Ivy League school, hazing is a part of our time honored tradition!

Jesus Christ it's like they're asking for Elder Gods to come and kill them.

I mean, they sort of are, since they hold a SEANCE. 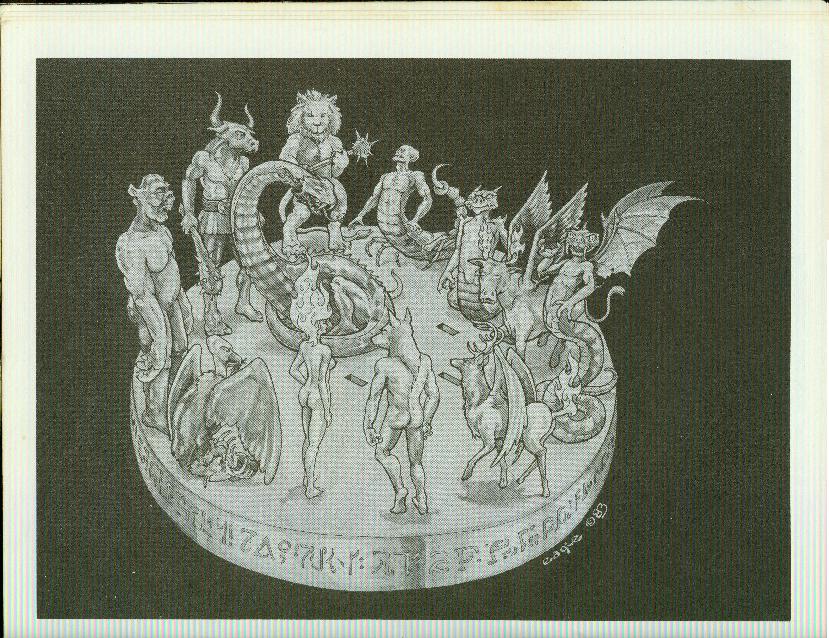 This is what the seance is like, I guess. Man, rich people are weird.

SPOILERS: They contact a spirit, the temperature drops, and then the 450 pound table lifts 24 inches off the ground. Knocks emanate from the table. Elsie looks and sees FUCKING CLAW MARKS but doesn't think to mention it.

At Midnight, Nils begins to groan. He breaks the circle by standing in the grip of a seizure and stiffly falling over backwards.

WHAT DID I TELL YOU

His first act upon regaining consciousness is that he starts to claw at his head until he starts losing mobility and starts to drool. Then, he passes out again.

His skin feels hot to the touch and he has visibly uncertain coordination for five minutes or so. Joel, Levi and Blaine help him back to his dorm. Later... 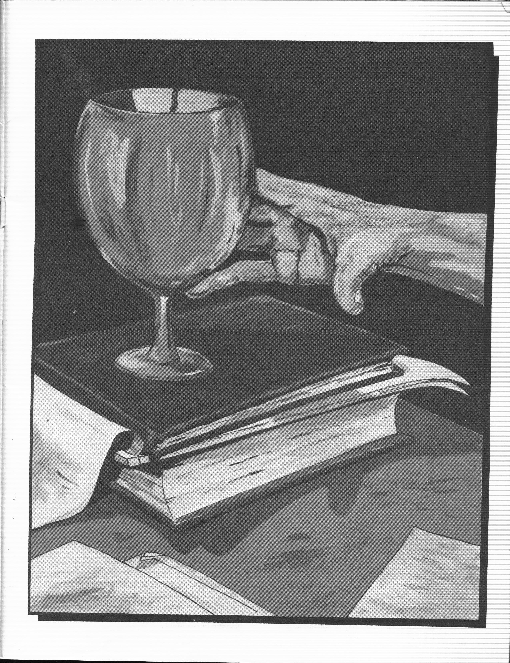 5:45 PM, Monday, 9th April, 1923. The reading room of the University Library. The players are gathered together to work on plans for the Sunday Club's picnic on May 28, a big social event. It's at this moment that things get weird.

As you reject idea after idea as being too mundane or too wild, you catch sight of Darryl Stewart, another member of the Sunday Club. He waves a newspaper at you and hurries across the room to plant it triumphantly onto the table in front of you.

"The whole world's gone mad," he exclaims. "Can you believe this tripe they're printing? Look at it."

The cover story is about a particularly gruesome attack on a policeman that morning. The article describes in great detail how the policeman, in plain view of several people, was suddenly hurled against a wall and then had his arm ripped off his body. The reporter swears on a stack of Bibles that the bloody arm waved about in the air by itself for several minutes. He even took a photograph.


Ray looks up brightly. "Gang, it looks like we've got ourselves a mystery !"

As you look again at the photograph next to the article, you can see very plainly that a young man is standing by the policeman holding what indeed looks like an arm. The caption reads, "FLYING ARM!" in bold type. According to the article, no one can explain how the arm is hanging there in space.

"Thank God you can see him," says Stewart. "I showed the foolish thing to half a dozen people, and they all swear there's nothing in that picture but the arm floating in mid-air. I thought I was going crazy. But you can see the chap holding the arm, can't you?"

Indeed you can. But when you show the picture to others in the library, you get the same reaction Stewart claimed. No one else seems to see the man holding the arm.


Call of Cthulhu: "Thank God you can see him, I thought I was going crazy"

"The awful thing about it is," says Stewart, "that I think I know the chap in the picture. So do you. Isn't it Lindstrom, that fellow in pre-law who's father is a senator or some such near Chicago?"

It does indeed look like Lindstrom. There's a magnifying glass on the librarian's desk, and under the lens, you can make our even more detail. The man holding the arm that was torn off the policeman's body is very definitely Nils Lindstrom. His face is contorted in unnatural rage, but the nose, ears and chin are unmistakeable. He is holding the blood-soaked arm in his right hand. In his left hand is a canvas and leather bag of the type banks use. You can just make our a name stencilled on the bag. "1st National Bank," reads Stewart.

An article immediately below the cover story is about a daring daylight raid on the First National Bank not four hundred yards from the alley where the policeman was dismembered.

"I don't think I like the looks of this," Says Stewart. With that, he promptly leaves.


Thanks, Stewart. Way to take one for the Sunday Club.


The policeman is apparently still alive, so Levi suggests they go ask him about having his arm torn off. He's at the University Hospital.

Elsie, however, thinks that it'd be worth looking into Nils' involvement. He sure didn't seem all too well after being fucking hazed talking with ghosts.

Joel doesn't care either way, and Ray agrees with Elsie. They SPLIT UP.


Unfortunately, the patrolman isn't conscious yet, and even if he was he probably wouldn't want to talk to anyone, since he lost his goddamn arm. The nurse helpfully points Joel and Levi in the direction of the morgue, where they are keeping his arm.

They are able to confirm with certainty that the arm is in fact, not attached to his body. They find something else interesting: the body of Benton Charles Dank, the owner of the bank that was robbed. He was slain in the vault.

According to the news article, "Severed finger of woman with wedding band found on bank manager's desk with blood-stained handkerchief. Handkerchief is initialled N.L. Blood over everything."

The reporter, Reporter Anthony Greenly, who wrote the story and took the photo, is also there, and attests that the arm was just floating on its own, and wasn't held by anyone. He suspects that Levi and Joel may be mentally ill.

He points the way to Miss Pamela Simpson, a bank teller who was struck by a bus on the street shortly after the robbery. She's unconscious, but is doing much, much better than Patrolman Malone.

Elsie and Ray have much better luck. First of all, Ray sort of knows Nils. After several successful Knowledge rolls (Elaine doesn't remember jack or shit)

Nineteen years old, amiable and fairly intelligent. He stammers a little and is very shy with aggressive women. He is the only son of Senator Harold Lindstrom, Republican, Indiana. Nils' father is wealthy and powerful. Nils just wants to make friends.

He joined the Sunday Club for that specific purpose. He hasn't done very well, though. The Players all know him vaguely.

He is a serious student, but not brilliant.

The Players last met Nils at the home of Professor Vincent Duprey who holds the Scanper Chair of Anthropology and who lives at Fairview Manor in Arkham.

His daughter, Patricia? Okay, I'm just going to screencap this...

That's right. She's so awful that to not get angry at her actually causes you SAN damage. Holy shit, the Sunday Club is just full of fucking awful people, isn't it? Let's just haze shy Nils by hypnotizing him and give people information about police men having their arms ripped off and just TAKING OFF WITH NO OFFER OF HELP. Let's be so terrible that we literally drain others sanity.

I hate The Sunday Club and they deserve the roiling mass of gibbering insanity that awaits them.