Doctor Who RPG by FrozenGoldfishGod 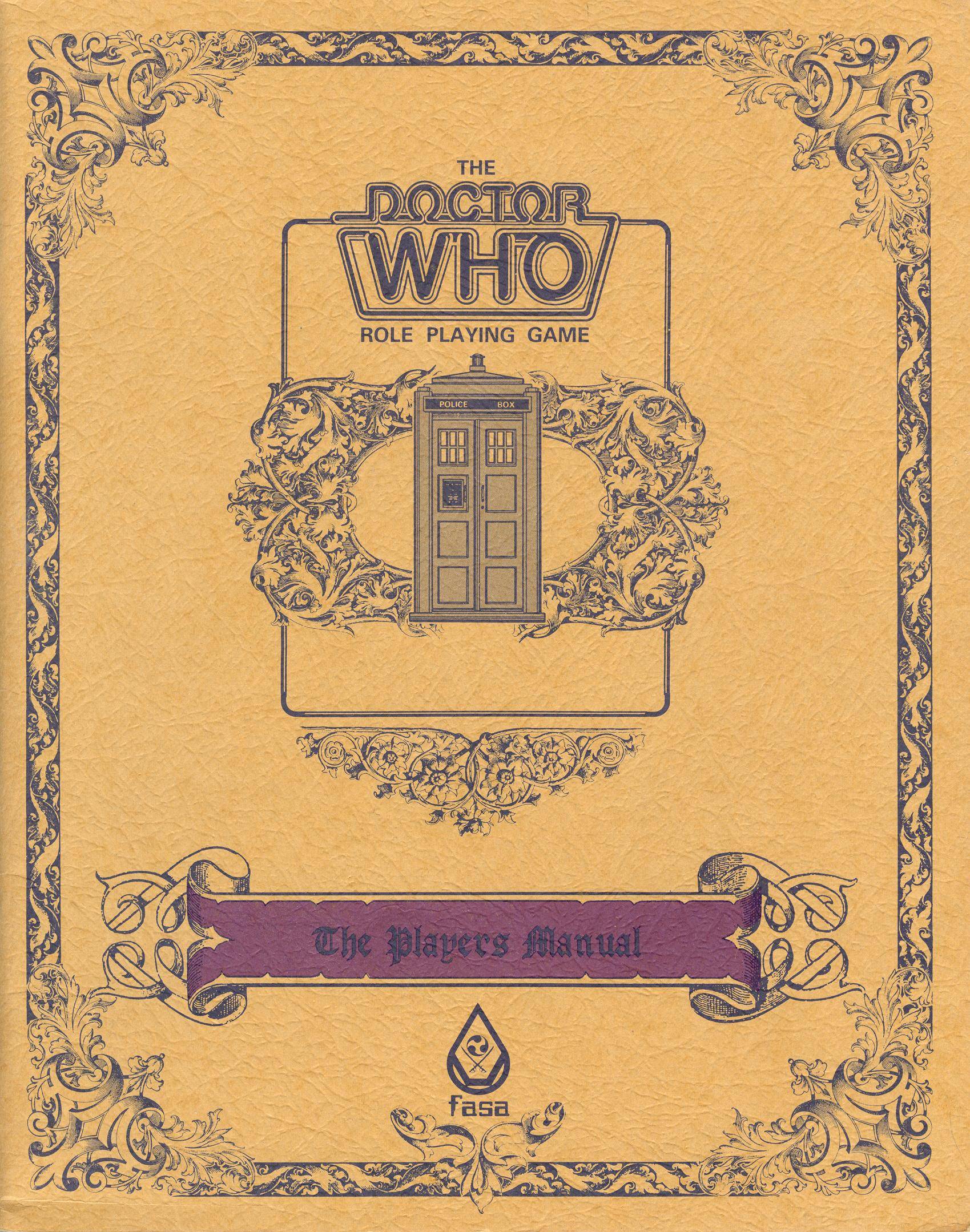 I've decided to do this one first, because if I were going to actually run a game, this book would be the one the greatest number of people would see. This is the 1985 edition of the game, and the layout certainly shows it - here's a sample page. 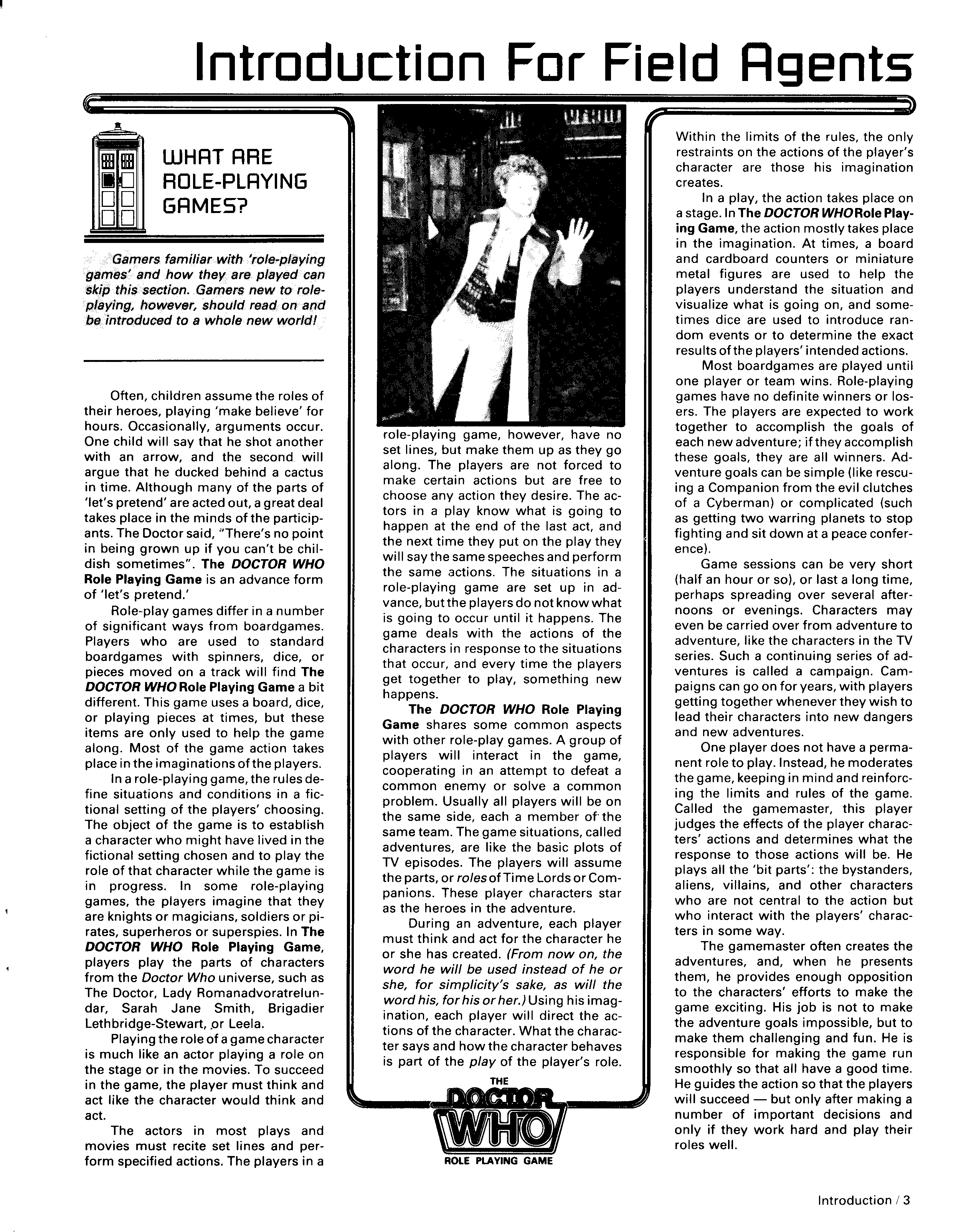 They're ALL laid out like this - the charts are all laid out within this layout, and the pictures are too. The pictures are all black-and-white stills from the TV show, although I'll be posting particularly humorous or ridiculous ones.

For this update, I'll be covering the introduction to the game.

The introduction section is entitled 'Introduction for Field Agents', and it offers a fairly decent overview of what a role-playing game is, and how it works relative to other forms of game. There's also a comparison to acting and similar, but overall this part isn't too pretentious and does a good job of explaining the concepts to someone who's never played an RPG before. And no, the GM isn't called the 'Game Operations Manager' or anything like that - they're just called the 'gamemaster'.

Then it goes on to explain that in this game, you can play either a human Companion, or a Time Lord. Want to play the only Sontaran who isn't a shithead? Too bad, play a human. Want to play some other non-hostile race? Fuck you, play a human. According to the book, the Time Lord characters are all agents of the Celestial Intervention Agency (or CIA - get it, you guys? CIA? Eh? EH? :tardsuicide:). These CIA agents are all renegade Time Lords, violating the Time Lord rule against doing anything but sitting on your hands, and for some reason all the various hostile aliens and so on are obsessed with conquering Earth because, in the book's own words,

...humans are the greatest force for good or for bad.


In all fairness, this section does also include some useful information: namely, that non-violent solutions to problems are likely to be more appropriate for the setting, and that if a player isn't familiar with the setting or the rules, they might want to just play a human for a while. Nothing that a good GM couldn't figure out, but helpful for a group just sitting down to play their first game together.

There's a brief look at the game books available at the initial release of this game: this manual, the Game Operations Manual (the GM's guide, which I will review after I finish this one), and the Sourcebook for Field Operatives, which is apparently a collection of IC documents to offer some flavor. I'm afraid I don't have that one.

Now it's time to look at the basic mechanical components of a character. They begin with a look at the two playable races: Gallifreyan Time Lords, and humans. For those not familiar with the series, Gallifrey is the home planet of the Time Lords, a race of humanoid aliens that have the most advanced time-travel capabilities in the setting. While all Time Lords are originally Gallifreyans, not all inhabitants of Gallifrey are Time Lords.

Humans are touched on briefly, but apart from one again reminding us that newbies to the setting and system should probably play a human, and that human Companions are usually somewhat extraordinary compared to normal humans, it's assumed that the reader already knows plenty about being a human.

Then they discuss the ways in which a Time Lord varies from a human. First up is age, though they point out that this is unlikely to come up in gameplay. Furthermore, at least initially, a Time Lord character is more likely to know more about the various aliens running around. Finally, they touch briefly on regeneration - the Time Lord capacity to cheat death by transforming into a different (albeit similar) person every time they are too old or too gravely injured to live. As an example, they mention that the Doctor has regenerated five times by the time of publication.

And that's it for this update. Bit of a small one, but this way I can do the basics of the system, and hopefully a bit of sample character generation while I do it.