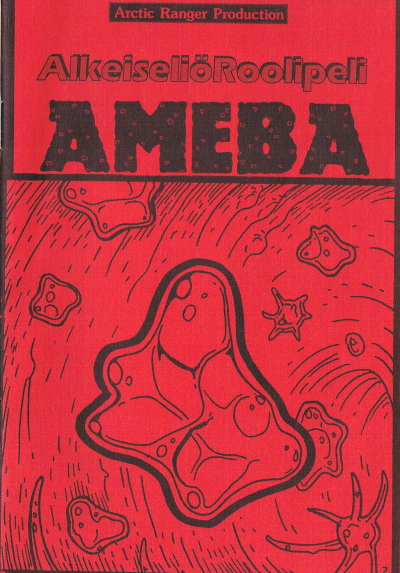 Ameba is Finnish roleplaying game in which players take on roles of amoebas. It’s pretty rules light beer and pretzels kind of game and has very low production values.

Players draw or use bubblegum or Blu-Tack to visualize their characters. Of course irl amoebas are too small to see by naked eye but it’s nice to be able to visualize the heroes. 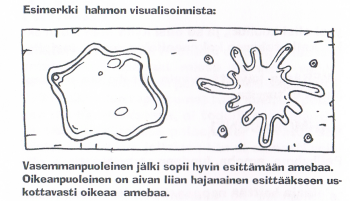 Amoeba on the left is perfect, the one on the right is too sporadic to be real amoeba.

Players have 9 points to divide among four stats:

Multiplying – amoebas don’t have stats like Charisma or Sex Appeal so they have to settle for this. Once every hour amoeba has the possibility of dividing into two playable characters. Lone amoeba is laughable weakling but when you got 130954 amoeba pals nobody messes with you.

Metabolism – measures how easy it is to eat and digest stuff

GM figures out target number and player rolls amount of d12s equal to stat. If the result is less than target number, character succeeds. Basic stuff.

Amoebas are pretty chill, mostly they just move around eating stuff. They have few enemies, like evil parameciums and bacteria. Amoebas survive in almost anything except hydrochloric acid or pea soup. 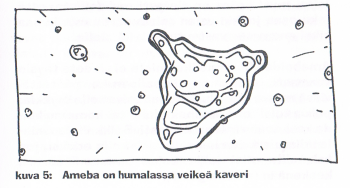 Unlike other rpgs where players have to defeat evil wizards and stuff like that, GM really has to proportion things to amoeba levels. This doesn’t mean amoeba life is boring, you can have exciting adventures and even campaigns with this rpg. Maybe the puddle PCs currently inhabit is in danger of drying out or freezing over? Or maybe amoebas have to escape from mad scientists petri dish?

It is also implied that amoebas communicate telepathically or use little cell phones so basically you could have lots of amoeba politics, spying, scheming and backstabbing. Why the hell not.

There’s few pages of tables that can be used to determine random events like wino/dog/car tire drinks/boils/flushes the liquid PCs are in.