Superheroes are a tricky genre to pull off in RPGs. It's a genre that requires the ability to create an incredibly diverse array of characters of varying abilities.

Supercrew is a 30-page PDF (also available in a print version), but still manages to be a complete superhero RPG that can be run start-to-finish in one session. In fact, the game states early on that that's the idea; this is not a game where you're going to get involved in a 12-month mega-crossover-event where it's everyone against Darkseid, or explore deep themes though the lens of superhumans. This is a game where the Trouble Alert goes off and you spring into action to stop the evil Dr. Nefarious from launching City Hall to the moon.

And you know what? I'm okay with that. Sometimes you want to do a huge cosmic smack-down, sometimes you want to tell a superhero story that explores a deeper theme...and sometime you just want put a cape on and punch a supervillian in the death ray.

Supercrew has no illusions about what is it or what it's trying to emulate. This is a game about superheros fighting Bad Guys, and the whole game is about emulating that feel you had when you were ten and reading Superman comics, wondering which of your blankets will let you fly off the roof if you tie it around your neck.

For example, one of the things that make Supercrew so great is that it is, in fact, written as a comic book. It's all hand drawn by the author, and uses the eponymous Supercrew's fight against the evil Fiat Lux as a running example of how the game's mechanics work. It's a clever bit of presentation that not only does a really good job showing how the game is played, it also helps the reader get into the proper "mindset" of the game itself.

The game starts out with a GM (presumably Tobias himself) running a D&D game for his friends.

Suddenly, a news report comes on over the radio: the supervillain Fiat Lux has robbed a bank! The players make some excuses to leave the table, leaving their bewildered GM behind so they can spring into action as... 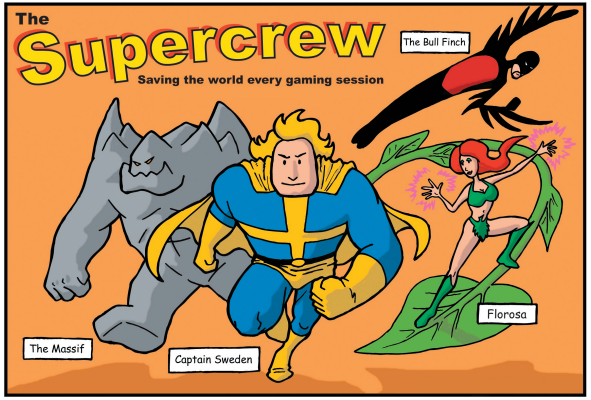 Tobais then goes into his own secret lair to tell us how to play the game. The "narrative" splits between the Supercrew trying to stop Fiat Lux, and Tobias explaing the mechanics behind what's going on.

Tobias starts off by explaining character creation. See, in Supercrew, the players are supposed to play themselves as superheroes. In fact, each adventure is supposed to start with everyone playing an RPG. Then the crisis is revealed, and the players have to make excuses as to why they have to bail so the GM doesn't learn their secret identities. At which point, the GM starts "officially" running Supercrew.

Is it cheesy? Hell yes it's cheesy. But it's that good kind of cheesy; the game realizes that it's supposed to be fun , and presents itself as such.

Creating a character is very easy, and takes about ten minutes. Every character has three powers; one rated at 1d6, one at 2d6, and one at 3d6. You can pick (or roll) to see what categories your powers are, such as Attributes (super-stats), Super Power (something normal humans just can't do), or Equipment.

Here's the thing on powers, though: that's as "defined" as they get. What a power actually is and how it works is completely up to the player. If you want your hero to have super speed, you don't have to sit down and figure everything you could accomplish with the power and buy it all in advance. You just say "My level 2 power is Super Speed", and you're done. What does Super Speed actually do? Whatever makes sense. "Equipment" could be a gun or a suit of power armor, mechanically it doesn't matter. All that matters is how many dice you roll when you try to do something with the power.

Once you figure out your powers, you then pick three Tricks (which I'll get to in a minute), and finally you take some colored pencils and draw your character's costume on the provided outline. That last part is required, by the way. 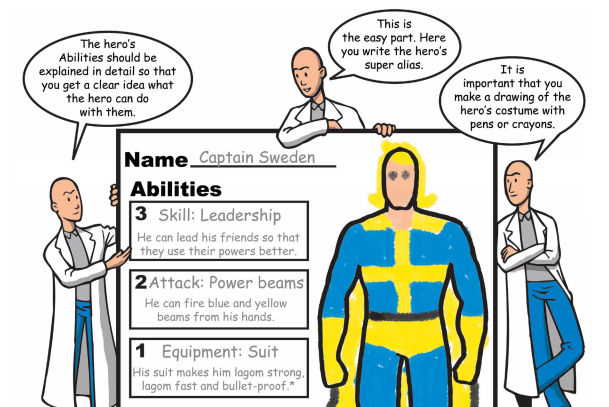 Dear George Strayon: That's how you put "color in your character sheet" in your game and make it work, you hack. (God, I'm going to be cursing him for the rest of my life, aren't I?

Just for the record, "logom" is a Swedish word meaning "not too much and not too little". He has just the right amount of super-strength.

Using powers is very simple; if you're not in any type of conflict, the power just works. If you have Plant Control, you can grow trees whenever you feel like it. Telepaths can read minds without a hassle. If you have super-speed, you can run halfway around the world for coffee no problem.

When you're in a conflict, you roll however many dice you have in the power you're using. Every die that comes up a 4 or better is a success, with sixes being a keep-and-reroll. As long as you get one success, you do whatever you were trying to do. The more successes you get (the Effect), the better you did.

Each character also has three Tricks, which are kind of like power stunts. These let you affect the Effect of a roll. You get one Trick that lets you reroll all your dice, one that gives you an automatic Effect of 2, and one that changes one of your rolled dice to a 5. Each trick can be used once per adventure, and has to be a "use" of one of your powers. For example, an archer character could say that his "Effect 2" Trick is a special armor-piercing arrow; he can use that Trick when he makes an attack.

Now, there are two things that should be pointed out about using powers:
First, failing a roll doesn't mean the power fails to work; what you're rolling is to see how well you succeeded at what you're trying to do with the power. If you're using your Flight power to scout ahead and don't roll any successes, that doesn't mean you fail to get off the ground or you fall out of the sky. All it means is that you didn't find what you were looking for.
Second, you can't use your 3-die power unless you spend a Hero Point. You earn a Hero Point when you use your 1-die power (pass or fail). What this means in practice is that your two-die power is the one you use most often, your 3-die power is your once-per-issue "big hit", and your 1-die tends to be your more utilitarian power.

When you roll to use your powers, the player gets to narrate what happens; in the comic, Bull Finch fails a Flight roll to track Fiat Lux. He decides to say that Lux shoots him out of the sky, but he could also have just said that Lux was too far ahead for him to catch up.

So how do you handle things that don't involve using your powers? Simple; you just role-play it.

Also, once per adventure you can get a bonus die by telling an Anecdote. This is just some "past adventure" you make up, like how these guys you're fighting aren't as tough as those lizard-men from Atlantis you fought last month.

When the party wants to accomplish a task (such as tracking the villain to his lair), the GM assigns a difficulty to it Each player gets one shot to try to overcome the obstacle by using a power; as long as the party generates enough successes between them to hit the task's difficulty, they succeed.

Now that's all well and good, but what about a good old-fashioned superhero fight?

Supercrew takes the "Fate Fractal" approach to enemy design. Any thing the character would "fight" is stated up as a bad guy, using the same basic mechanics as the characters. Even a burning building.

Characters and threats have Toughness; players get 3, and NPCs get however much the GM thinks is appropriate. NPCs and other threats also have attacks; some attacks may only be useable once or twice a fight. They're also not built the same way as PCs, instead using the ever-popular "eyeball it" method.

Combat is as straightforward as the rest of the game. At the start of the round, everyone declares actions. You can chance your action after hearing what other people are doing, so order doesn't matter at this point.

Once everyone's settled on what they're doing, everybody rolls. Actions happen in order from highest roll down.

When you're attacked, you do get a defense roll; if the target hasn't taken their turn yet, they can trade their upcoming action for a two-die defense, otherwise you only get one die. The damage of the attack is the attacker's Effect minus the defender's. When you're out of Toughness, you're out of the fight.

You'll notice I said "out of the fight" there. Nobody dies in Supercrew; instead they're just knocked out or neutralized. If the players all get KO'd, then they wake up after the villian's left, or come to in some bizarre deathtrap.

And...that's pretty much it. I told you it was short.

In the interest of fairness, the game does have a few flaws. It does leave a lot of things open for player and GM interpretation, which can lead to issues even with non-grog groups on occasion. It doesn't handle invulnerability-style powers well (they don't actually reduce damage).

It's also not really designed for campaign-style play; there's no character advancement at all since the game is designed around one-shots.

Characters aren't defined past their powers. Not to mention that if you want to play someone with more than three abilities you're kind of out of luck, which makes it a little tricky to design "existing" characters; I'm not sure how I'd design someone like Batman who really doesn't fit the "strong power/common power/utility power" framework.

That being said, it's worth picking up even if you have even a passing interest in superhero games. It's great for on-the-fly games if someone has to cancel at the last minute, and it's a really fun read. You can get the English version at Lulu for $6 for the PDF or $15 for the printed comic. You can also get the character sheets at Tobias's website .

Now, if you'll excuse me, I have to tie a blanket around my neck and head up to the roof. The commissioner needs me.