While GURPS Space produces a variety of fairly plausible star systems, aliens, and planets, let's go in the other direction with: 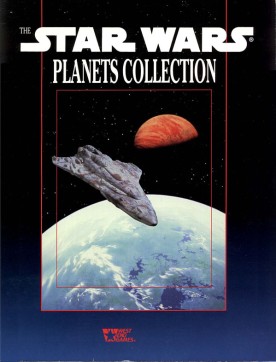 This book includes a set of rules for randomly generating planets, using a mix of d6 and d66 rolls. It starts out by reminding us that Star Wars is space opera, and then informs us of how the rules are weighted; in favor of advanced planets, with generalized terrain. They are also, though they don't say this outright, weighted in favor of human-habitable planets with relatively small populations.

We start out with a d66 roll for Planet Function .

We get 16, which gives us a result of Agriculture . Our planet produces food of some sort including "grains, vegetables, fruits, meats, vitamins, dietary supplements, and water", and the note that many ocean planets also rely on agriculture too. This result is incompatible with: Asteroid Belt, Artificial Planet Type, Barren Terrain.

I guess that our planet will be called Niacin III, source of 11% of the Galaxy's B-complex vitamins.

Next we have another d66 roll for Government Type . We get ourselves 65, which gives us a Tribal government type. It helpfully gives us a colloquial definition of tribehood, and notes that "many highly advanced and sophisticated tribal governments are found on planets throughout the Star Wars universe."

So we have a system of tribal vitamin farmers at this point.

Now we roll for Planet Type . This is a 2d6 roll. We get 5, which gives us a Terrestrial type. Note that eight out of the eleven possible results give us terrestrial. It takes a great deal of luck in order to live on something other than a earth-like ball of rock.

Terrain comes up next, another d66 roll. We get 33, which gives us a Mountain terrain type, and an explanation of what mountains are. So much of our planet is covered with mountains, that this makes us incompatible with a Saturated Hydrosphere result.

So we have tribal vitamin farmers spread throughout a world of mountains, hills, and valleys.

We have brief sidebars on tidal-locking, highly eccentric orbits, weather, and regulated environments, all of which have no direct mechanical association but which serve as food for thought. So I will ignore them completely.

So we've got ourselves a tropical world of mountains, hills and valleys, home to tribal groups of vitamin farmers. Niacin III is becoming fairly interesting already!

Up next we have two 2d6 rolls for Gravity and Atmosphere . We get 7 and 10 respectively, which gives us Standard gravity and a Type II (Breath Mask Suggested) atmosphere. So we have gravity within the ordinary range, and an atmosphere which is difficult to breath, (either by contaminants, pressure, or atmospheric proportions) without breathing gear, but which only has limited bad effects. These are left up to the game master to decide.

So we have a mildly breathable, tropical hothouse of mountains, hills, and valleys, home to tribal vitamin farmers, but at least it has ordinary gravity.

Next we have Hydrosphere . We roll 2d6 and get 6, for a Moderate result. This gives us a world that is between 15 and 49 percent covered by land, so within the Earthlike range. We have decent-sized oceans at least. It also says we have a variety of terrain types despite our terrain roll.

Fine. We have a fascinating mix of tropical rain forests, tropical cloud forests, and tropical deserts, up and down the sides of our mountains, where the gas-masked tribes harvest their vitamins. There are also probably oceans somewhere.

Next we roll 2d6 to determine the length of the year. The result on the first die is multiplied by 15, the second die is used to consult a little table, and the fourth die falls off the edge of the cliff. The two results (3 and 6) are added together for a year of 420 local days. An auspicious result. Perhaps these are not vitamin farmers after all. Overall, the day and year are shorter than Earth's.

Now we finally get into how developed the planet is, well after we figured out what it does for a living in the galactic economy. (We're probably in the flyover sectors.)

We have Starport , Population , and Tech Level , all of which are d6 based rolls. We get a Stellar Class starport, so we don't have to pay extra for repairs and upgrades to our ships, but we have to deal with Customs on the way in. We have a population of about 98 million total on the planet. The overall tech level is Space , so we are not behind the galaxy as a whole. Interestingly, this roll isn't as weighted as some of the others, so you have a decent chance of getting something that isn't on the level of galactic civilization. Then we get a section about Imports and Exports that boils down to "buy the book we made for this shit", a brief section on filling out the rest of the system, and a page on simple biology for inventing your own lifeforms.

So we have a fairly sparsely-populated planet, with high technology and good spaceports. It is a greenhouse of a planet, with good-sized oceans, plenty of water, but a craggy and mountainous terrain overall. The inhabitants are organized into tribal groups of vitamin (or

The main thing about this is that, except for two results on the Government table and the examples, this is fairly generic as far as sci-fi goes, so it would be easy to adapt this for a non-Star Wars game if you wanted to, especially since it uses six-sided dice.