Macho Women with Guns by Effectronica

Over in grogs.txt, there was posted a Kickstarter for a game where you play RPG cheesecake art characters. It was pretty sleazy and all, but it also has already been done, and much better, in

Macho Women With Guns! was first released in the late 80s as a 12-page booklet, with two later supplements. We will instead be reviewing the 1994 Second Edition, which consolidated all of the previous products and added adventures, character sheets, and sample cutout figures.

How best to explain Macho Women With Guns! ? Let's let the rulebook speak for itself for a little bit:

"What Is Macho Women With Guns? posted:

Macho Women With Guns is the game of a world twisted beyond the bounds of chauvinism and reason. Where nothing is immune to lethal doses of satire, and nothing is too sacred to be dragged through the mud. Where we are hopefully so biased and contradictory and blatantly offensive that no one in their right minds will take us seriously.

Macho Women makes the assumption that women have been getting the short end of the stick in role-playing games, and it is time to do something about it, in the most satirical, humorous way possible. All the player characters are women, and all the evil creatures that stalk the land are men, male, or at best, without gender at all (however, since most of the people buying and playing it will be men, there will be lots of pictures of these scantily clad radical feminists to help it sell.

Macho Women was conceived, if that's the proper term, as a counter to the blatant use of T&A in game art by a number of large and well-known game companies who shall remain nameless on the advice of our lawyers. I put the two basic elements of this artwork (scantily clad women and long, hard weapons) together, and then said, "there's a game in this somewhere". Over the next few weeks, I gave it some occasional thought, and then sat down one night at the computer and typed it up in one sitting, formatting as I went. I think it was playtested once before production (which gives it an edge over some games I have seen), and a local artist by the name of Darrell Midgette did up the cover and interiors.


Meanwhile, the basic setting is as follows:

Let's take a look at what our basic character options are! 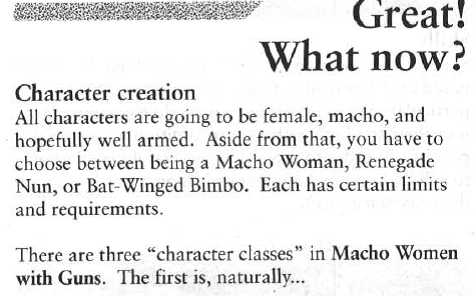 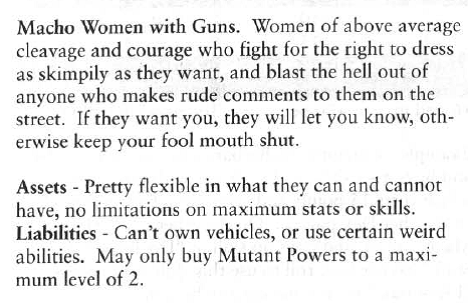 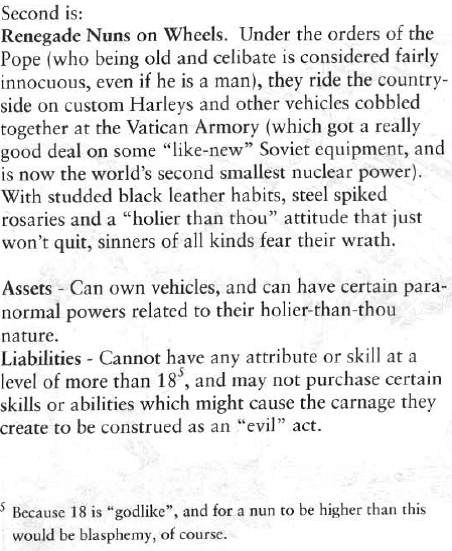 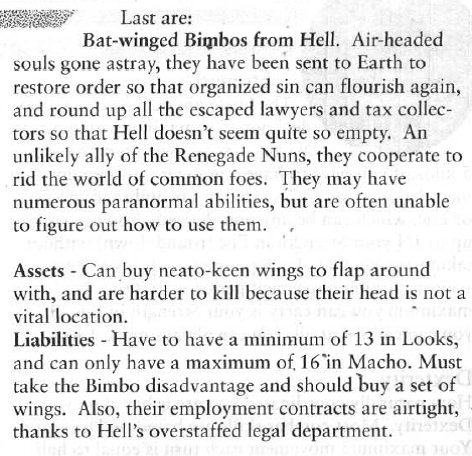 And here's a handy chart for buying attributes: 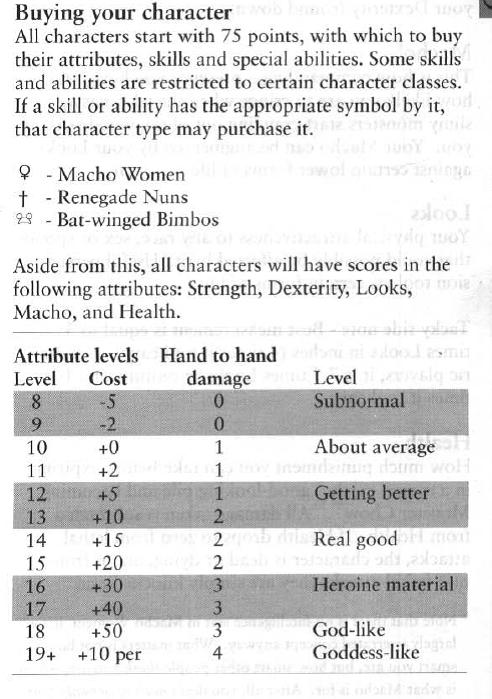 Each attribute does something different. Strength determines hand-to-hand damage and how much you can carry in Encumbrance Units. You can carry up to 1/4 of your Strength before taking penalties, and after that it's -1 to movement per unit, up to your Strength. You can always move at least one hex as long as you can carry everything you're holding.

Dexterity is used for most combat skills, and you can move up to 1/2 your Dexterity in hexes a round.

Macho determines how commanding you are, and how well you hold up when the "icky, nasty, slimy things start coming out of the woodwork at you". Macho is augmented by your Looks when you're using it against men and male things.

Looks determine how attractive you are to anything that could possibly find you attractive. Used for persuasion.

Health determines how many hits you can take- all damage is subtracted from Health.

There is also this note:

The basic action resolution is that you roll 3d6 and try to get less than Attribute + Skill. Untrained skills count for -3. Here's how buying skills work:

Up next: Skills, Weird Advantages, Weird Disadvantages, and naming your character.