Dirty Secrets of the Black Hand by DivineCoffeeBinge

In a line full of terrible books, one stands out. One Vampire: the Masquerade book worse than any other (in my humble opinion). One book so bad that subsequent books went out of their way to insert sidebars about how everything in it no longer applied.

The Dirty Secrets of the Black Hand . It is terrible. I have decided to suffer through it so you don't have to.

A bit of background. The three major factions in V:tM were the Camarilla , the guys with Princes and Masquerades and whatnot; the Anarchs , who want to tear down the Camarilla because it's oppressing them, man; and the Sabbat , who believe that vampires are monsters and they should fucking well act like it. There's also the Inconnu , but no one knows jack shit about the Inconnu.

The factions tend to have differing views on the Antediluvians. The Camarilla likes to pretend that they don't exist, but even if they do exist they're all sleeping anyways and it doesn't matter now shut up and do what you're told and no I'm not acting as a pawn to ancient, unspeakable evil, how dare you suggest that. The Anarchs tend to not know what the fuck an Antediluvian is. And the Sabbat is sworn to fight and kill the Antediluvians whenever they can (good fucking luck with that).

With me so far?

Okay. In previous books we've been introduced to the term "The Black Hand." This was said to be just a nickname for the Sabbat. Then the Sabbat books came out and it turns out that the Black Hand isn't the Sabbat, it's a faction of the Sabbat that acts like kind of a Sabbat KGB.

Not only does this book explain that that's all crap... 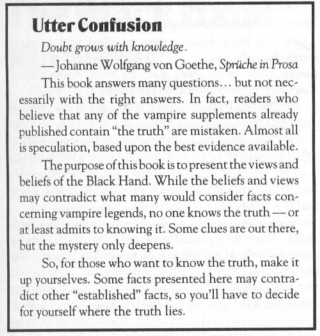 That's right! It's crap that might not even be true . White Wolf published this book, you bought it expecting to learn the secrets of the Sabbat KGB, and now you learn that not only is it not about the Sabbat KGB, not really, it's also not even pretending to be true. Fuck you, White Wolf! There's a difference between "you should feel free to tweak our setting to fit your own game" and "Ah hah hah, we're just fucking with you!"

You see, the Black Hand isn't just a faction within the Sabbat - it's an entirely separate faction of Vampires entirely (a 'sect' in V:tM parlance) that just pretends to be part of the Sabbat. Surprise! You wanted a book about a secretive Sabbat faction and you're getting something else entirely. Thanks for the money, sucker!

The "True" Black Hand is pretty small, somewhere on the order of 150 vampires or so, and their true name is the "Tal'mahe'Ra," which, okay, sure. It also claims as members a handful of mages and wraiths, an Abomination (a Vampire Werewolf), and a Mummy.

White Wolf, as you all probably know, had five different game lines in the old World of Darkness - vampires, mages, werewolves, wraiths, and changelings. They also had a few 'other' things that kind of got bolted on without getting game lines of their own, like mummies and gypsies. They all used roughly the same system.

The problem, as anyone who ever tried it in an actual game will tell you, is that despite crossing over mechanically and in the setting, these five groups do not play well together . Power levels were wildly inconsistent (especially in early editions, when a chargenned Mage with 0 XP could turn a Vampire with 500 XP into a lawn chair without being in the same state), not to mention that each group had their own preferred 'turf' (vampires were urban creatures, where most werewolves couldn't thrive, and wraiths lived in the fucking afterlife and could barely even interact with most vampires and werewolves, and and and...).

Basically everything that a sane and stable GM ever told you you couldn't do in a game? The Black Hand does. Again... fuck you, White Wolf.

Now, that bit about the Antediluvians above? You may wonder why I brought it up. I did it because the Black Hand - the 'true' Hand, the Tal'mahe'ra - has a different opinion on the Antediluvians - namely, that they try to serve the Antediluvians, willingly making themselves pawns of the creatures that every other group in the game line either opposes or tries to ignore. So, there's that.

Not only is this book laughing at you for buying what you thought was a Sabbat sourcebook, it's also all about a group that has willingly signed on with the people that every other book in the game line has told you are the bad guys. It's like buying a Forgotten Realms book called "Secrets of Neverwinter" and getting a book about being in the Red Wizards of Thay or some shit.

Tune in next time when we learn the History of the Black Hand !

History of the Black Hand

So let's talk about the history of the Black Hand. Back in the day there were a group of mages called the Tal'mahe'Ra who were obsessed with death. Eventually they became the Euthanatos Tradition.

Is this mentioned in any of the Mage books dealing with the Euthanatos? The fuck it is.

The cult started admitting vampires as members, and the vampires made the mages into Ghouls (immortal servants who drink vampire blood), only they found a way to avoid the Blood Bond by drinking the blood of a bunch of different vampires mixed together. Later on they taught the Sabbat how to break a Blood Bond using this method.

Around 500 BC the vampires took over the cult, and expanded into Europe, where they met still more mages who belonged to the Verbena Tradition and they traded notes on blood magic and stuff. Which is a neat trick, considering the Verbena study and devote themselves to Life and the vampires are, you know, pretty antithetical to that. Thus far we've seen two different Mage Traditions that have very little resemblance to the Traditions we see in the actual Mage books. Neat trick, that.

The group splintered into the Eastern Hand and the Western Hand and the two halves fought, and then there was the Sabbat Civil War, and here we get into a lot of minutae that no one who doesn't know a ton about the oWoD metaplot will care about, so I'm not gonna bother talking about it. Then there's some issues in Enoch -

Oh, right. Enoch. Enoch is the Black Hand's headquarters. It is in the Shadowlands. Where the Wraiths live. This sect you've never heard of and which has never even been hinted at in a book until now? They have a secret city in the afterlife because fuck it, why not. Seriously, this shit reads like bad V:tM metaplot fanfic. Oh, and in case you were curious - no, Enoch is not mentioned in a single Wraith book (that I know of; I wasn't enough of a masochist to read all the Wraith books, that game was painful. There's enough angst in the oWoD without using it as a statistic ).

Anyways, East and West reunite and then there's some Middle Ages shenanigans that only matter if you were a devoted player of the Dark Ages Vampire setting, so the hell with it. This book is trying hard to connect to pretty much everything White Wolf has ever published, and it's just ridiculous because it's coming from nowhere.

So! The Black Hand in the current day! Apparently at least 40 Primogen members throughout the Camarilla are members of the Hand, as well as at least a dozen Princes ad a Justicar, which is a neat trick since earlier they said there were around 40 Black Hand in the Camarilla total . This shit contradicts itself in the same fucking chapter oh God my skull

The Hand is also involved in something called the Shadow Crusade, a battle against Umbral spirits called Souleaters. We'll discuss this in detail later. Suffice it to say it is mind-numbingly stupid.

The Black Hand is run by a "mysterious figure" called the Del'Roh. Exactly how mysterious the Del'Roh is, considering that they're supposedly chosen by the Seraphim, is kind of a mystery to me, but so be it. The Del'Roh's lieutenants are called Seraphim; there are ten of them. Along with the ten Seraphim, the Hand's "Council of Thirteen," or "wazirs," is filled out with three vampires who were once Euthanatos mages, called liches.

Below the council are the Dominions, each of which belongs to some secret faction or another, and then there are a bunch of other hidden factions like the Cult of the Erinyes, who are all women; the Qadi, who are kind of the equivalent of the Camarilla's Justicars, and the Rawi, or Keepers of the Lore, who are librarians and who guard the "Guarded Rubrics," which are important sacred writings of some sort. There are like 200 vampires tops in the Black Hand, and apparently ten to fifteen percent of them are in top-level leadership roles, this seems a little implausible to me.

Many Hand members belong to groups called kamuts, which are like little cabals each dedicated to a specific purpose. Some Hand members believe that the kamuts are based on concepts learned from the Dhabi - the Silent Strider Werewolves, who they 'once knew.' Which is, again, a neat trick, as vampires and werewolves hate each other and fight on sight. But hey, who needs internal consistency, right? Not this fuckin' book!

There's a glossary and discussion of themes and mood and honestly I can't fucking handle them right now. Fuck the rest of this chapter. Gah.