posted by Covok Original SA post In the darkest corners of our globe...

Those who venture to such places...

He who seeks coin and fortune...

...would be better served in any other means. 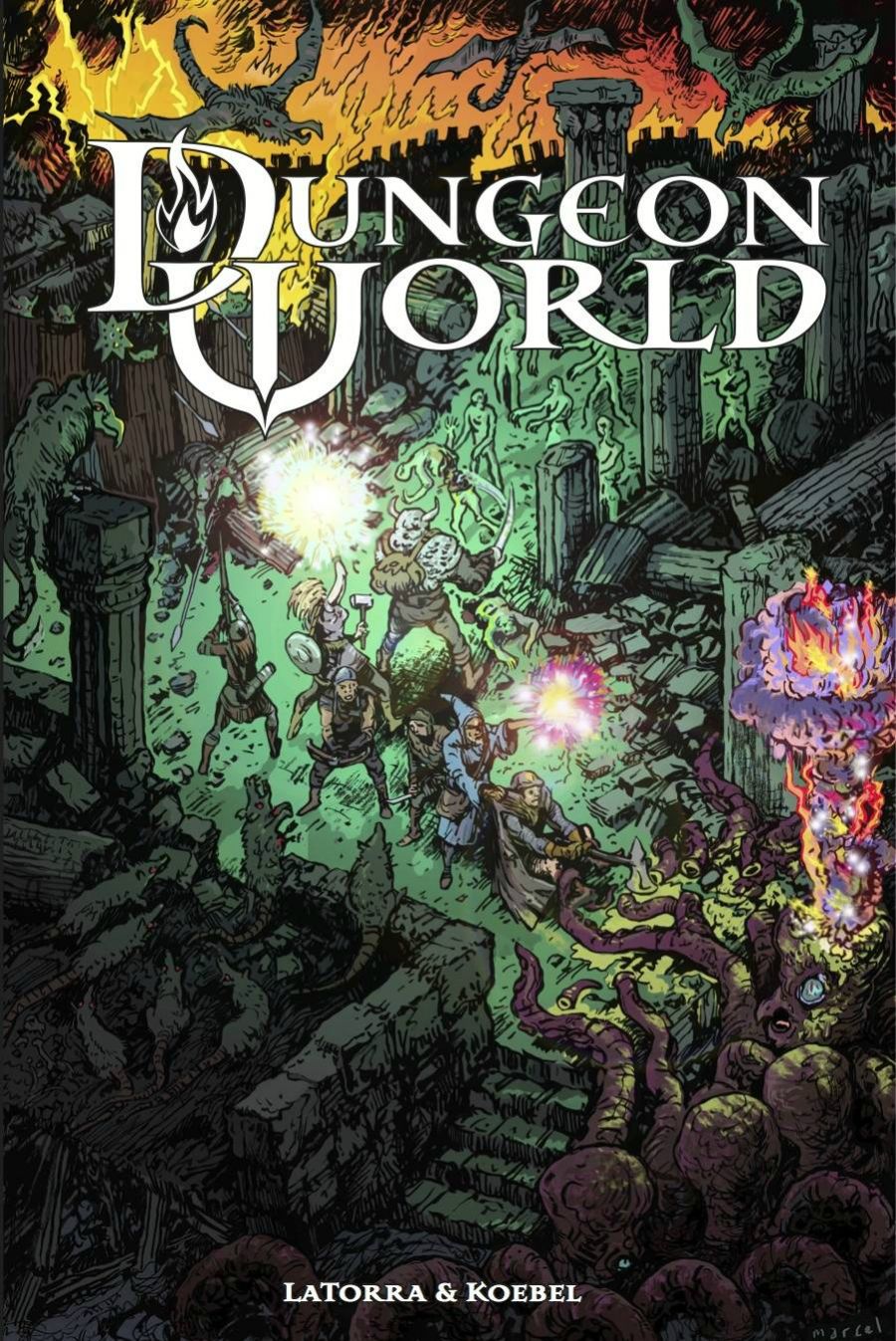 What is this?
Back in 2010, Vincent D. Baker released Apocalypse World. It introduced the world to a dark, depressing world that was lingering on after its timed departure. It's engine, the Powered By The Apocalypse, engine was put out on an open license for anyone who wanted to use it.

Cue Sage LaTorra and Adam Koebel. Besides having names that sound fake yet are, somehow, actually their names, they both had the idea to take this engine and use it to make a generic fantasy title. While this title has been considered to not have aged well, it did do a lot to bring people to this engine and show how fun and hackable it could be. Basically, Apocalypse World's implied setting tended to turn people away (myself included) where this safe, though generic, option gave me a chance to play with the engine.

We'll be going through the title and commenting on it as it goes along. Hopefully, I won't just quit and vanish out of boredom like I did the last time I tried to do a Fatal and Friends.

Pre-Introduction
I bought this off the original website so my copy hasn't been updated since release. I don't know if a bookmarked version has been released. I bring this up as it is weird that there is a hyperlinked Table of Contents, but not PDF bookmarks. Bookmarks are easier to implement and more useful so I wonder why they didn't go that route. It's a bit odd.

Chapter 1: Introduction
We open to chapter 1 and are immediately greeted by an introduction that is meant to get us into the right mindset. Unlike Apocalypse World before it, Dungeon World is not to be written in a voice. However, it does go the route of having an implied setting. There is no section detailing their Not-Forgotten Realms world like in some fantasy books. While some would find this as lacking, Dungeon World, like Apocalypse World and other PbtA titles, encourages players to create their own setting from the prompts presented here:
It also provides some examples of locals like a Cursed Woods.

Overall, it's hard to say if this succeeds as, well, I've been playing D&D for a while. I know what they want this game to be because I've played other games like it. If this was my first exposure, it might not be enough.

Thankfully, they delve into a brief description of every class. I mentioned earlier that it uses the "classic" classes, but some here -- though I doubt it -- might not know what those are. To be fair, there are some variants in what is considered classic. The classes in this book are:

In addition to this, there was a Kickstarter-only Barbarian and, for a charity, there was an Immolator (a fire-bender). As those two are not in this book, they won't be discussed here. Now, some of you may have noticed something missing: the Monk. Or the mystic, depending on if you want to use the old school name. In a way, this is reinforcing their view on a fantasy world (medieval-only), but it does feel as an odd exclusion as the class was just as common as the Druid in older games and this title does, as we will see, borrow a lot from older tiles. I like martial artists, what can I say?

Moving along, the class descriptions do a better job of describing the intended world.

These class descriptions do give me a better idea of what kind of world that Dungeon World is expected to be: a world on the brink, full of monsters and heroes, where the gods are far but their present felt, where nature holds force and people can command it, and one where a dangerous force lies in the shadows for the educated to manipulate and control (or be controlled by). In many ways, it's familiar. As a matter of fact, it's basically D&D. But, in others, it does feel darker. It reminds me of how Torchbearer described its setting. It feels like Apocalypse World's desolation and desperation, but with some more civilization: not just towns, but cities. A dangerous, violent place filled with horror, but one with safe places and majesty.

Not to be a broken record, but, despite its familiarity, it strangely feels fresh. Though, that could be me liking my own interpretation.

Moving along, we see an odd, odd thing that they did with the book: side-margin quotes. Throughout the book, there are quotes from many sources in the side-margins. Sometimes they are jokes and sometimes they are just "cool" lines. It's not like they aren't funny at time, but I usually find them distracting. If they were consistent, I'd say it better informs us of the setting, but, instead, they just serve to be an odd distraction.

In this case, the quote is useful as it gives a grim and unflattering opinion on heroes. The most telling thing is it doesn't call them Heroes, it calls them adventurers. Furthermore, it says they are sometimes helpful, but usually just fools who find themselves dead in a ditch. If everything before was what heroes think of themselves, this is what the world thinks of them and it isn't flattering. Yes, I do know it's from another work, but it's inclusion does suggest that the writers considered it to enhance the book's ability to communicate the game to the players. So, it's worth analyzing.

Dungeon World takes this moment to list out why one should play it:


The first reason tells us that adventures shouldn't be mundane. They should travel to the darkest depths and the highest peaks: this is game should be cranked up to 11. In some ways, this contradicts some of the gritters elements introduced earlier, but only if you're the type who doesn't feel that "grit" and "amazing feats" go together. I feel those elements go together well, personally.

The second reasons brings us back to grit. This should not be an easy adventure nor should the party be united. They should argue, but grow into a group. They should struggle, but overcome: this isn't a meatgrinder. In other words, people shouldn't be buddy-buddy and things should be dangerous, but it isn't MonsterHearts and it isn't Dungeon Crawl Classics, so to speak (it isn't a relationship game built on messy ties and it isn't a game where character death is a part of chargen, to clarify).

The last reason gives us a more "game-able" goal. The other goals were more narrative, but this one is more of how to structure adventures. The world is big and wide and should be explored. And that's always a reason to go out. You may have other reasons, but exploration underlies it all. What this tells me is that the game should be one where the players get to feel like they are somewhere different every few sessions: places shouldn't feel the same, ya know?

The book goes through the standard, but necessary, explanation on how to read the book and how to setup for the game. It's pretty standard and not worth discussing.

The first chapter ends on a brief explanation on what's it like to play Dungeon World. This brings together a lot of what was said before on how the game should be played. It doesn't bring up anything new on that front except for bringing up this element of self-improvement. That heroes should grow in power as the game progressing and seek out such improvement. It's funny this only now gets brought up since it seems to be a very important element to the game. Perhaps it was because of the rule of 3, but it should have been listed as one of the "Why"s.

Very interestingly, while dice have been brought up before, this is the first time moves are brought up as well as what Vincent D Baker calls "The Conversation." Moves will be brought up later, but I don't know if the conversation is ever brought up again, which is a shame. The Conversation is the back-and-forth that exists between players and the GM, the one running the game. It's a very, very important concept to get down for a PbtA game to work so bringing it up so briefly is problematic.

The last paragraph of this chapter establishes that Dungeon World can be played for long campaigns. Campaigns is a loosely defined terms, but it's questionable if PbtA game can last that long for certain definitions. While DW is different from other PbtA titles, it can be sometimes hard to run long-term PbtA games. I've run very long term PbtA games and I find that they have trouble in that environment. That said, one element that might save DW in this field its encouragement of exploration. Apocalypse World was big on using a very small cast of reoccurring characters as was the PbtA title that I was running when I noticed these problems. A game focusing on exploration could keep the element of "running out of ideas" and "overusing elements" from occurring. But, who knows? I've only ran DW once and it wasn't for that long.

Anyway, that's the end of Chapter 1. See you all in Chapter 2:

Next Time: Pretty much all the fuckin' rules. Oui Vey!