It is. Holy shit, is it ever! Hell, you know what, I'm going to engage in some VIRAL MARKETING™ and talk about Mekayana right here, right now.

Mekayana isn't a full game by itself, but a supplement for Mecha from Heroic Journey Publishing- basically, a light, cinematic system for roleplaying robot pilots and their mechs. For more information on Mecha, I strongly suggest TK-31's indepth look at the system . You can get Mekayana itself here for free!

Anyway, we start off Mekayana with the best cover in the history of everything: 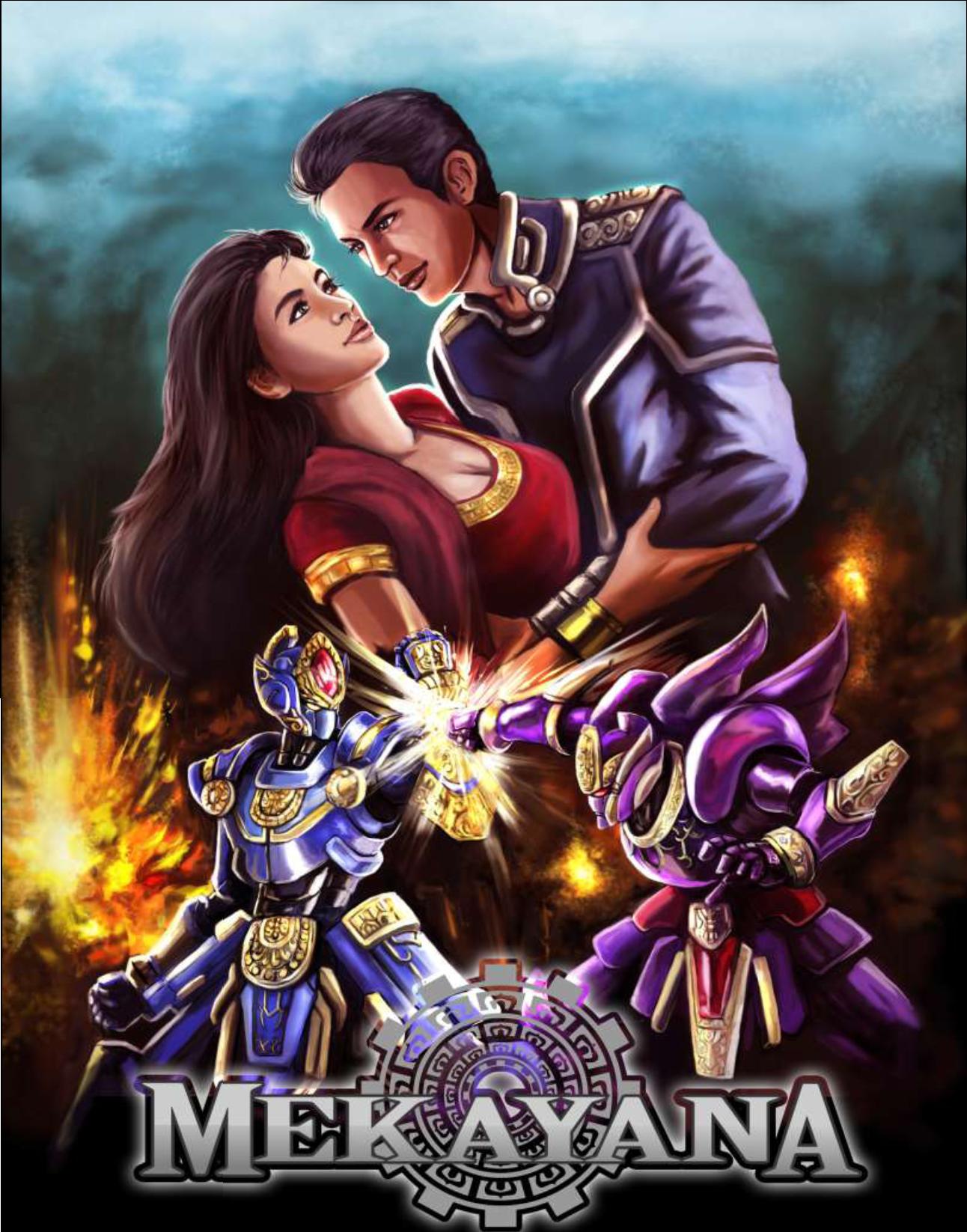 That cover, that goddamn cover, should tell you everything you need to know about Mekayana. That said, it's the only piece of art currently available for the book- for the moment. As I mentioned, Heroic Journeys is offering a free copy of Mekayana, with a minimum $10 donation ensuring that you get a full-art pdf once it's out. That said, the rules in Mekayana are complete enough for anyone with the Mecha rulebook to have and enjoy a game.

The introductory fluff is also great at setting the mood. Basically, it tells the story of Vijay, a mech pilot with the Indian Defence Forces, scouting out the Kashmiri mountains with his squad. Poor Vijay's in a bit of a funk. You see, way back when Vijay was a teenager, his uncle made a joke offensive to Muslims, which mad it very difficult for Vijay to get with the girl he loved, Naureen- all they could manage were short walks together by the sidewalk on the way back from school, poor things.

But though they drifted apart, Vijay never forgot her, and was overjoyed when he saw a mech coloured seashell blue at the Special India Defense Taskforce training grounds, and he knew it was her! They began their romance again, full of chaste passion and love, but Vijay sensed Naureen was hiding something- and one day, Naureen disappeared, along with an entire squadron of mechs. Though Internal Security grilled him relentlessly, all Vijay felt was sadness and pain where there had once been happiness and joy.

But here, on patrol, he sees once more the seashell blue mech, and... well, I'll let the book show it:

The two IND-1 Indras came to ground away from their comrades, and then they just stood their, their metal armor pinging rhythmically in the cooling night. Neither moved for a moment. What could Vijay say now that would be adequate to express his grief and betrayal, that he still loved her. He nudged his mekayana one step closer to the other. “Naureen...” he started to say, but his voice choked. He cleared his mind. No, mere words were not enough.

“NAUREEN...” his alto voice rang into the night. Strings crescendoed loudly, the pinging of their mekayana merging into a rhythmic bass beat. His mekayana’s legs moved, spread out, and he spread his arms wide. “You who are my lost love, why must we meet here...” he crooned, his arms swaying rhythmically. His mecha waltzed to the side, and then Naureen’s arms also raised, and she echoed his dance movements. Her voice came over the communication system in song.

And the two mecha danced under the stars while their pilots sang a melancholy song of lost love to each other.

The rest of Chapter 1 in an abridged history of India, from the first settlements in the Indus Valley, to King Maurya uniting the continent for the first time, to the Mughals, to modern India, warts and all. It's not at all exploitative, and you can tell that while the writer(s) loves their Bollywood, they genuinely have a great deal of respect for the country. No Indian weeaboos here, insofar as I can tell. There are also story ideas set in different Indian eras. Some of my favourites are:

Imagine a mythic India where the states fight wars with mortal armies led by great devayana, vehicles of the Gods. What if Alexander the Great brought the ultimate products of Greek artifice - the steampowered colossi - to wage battle against the devayana defending India?

How did Maurya unite an entire continent under one rule, where the Greeks and the Persians failed? Was he granted valley-striding giants by the devas, or did his Kshatriya soldiers don Brahmin-summoned armor that granted them battlefield-dominating powers?

The British empire spanned the world. Did they steal the secrets of the mekayana from India, or perhaps they brought them to India to try to tighten their control? Did bandits hiding in the mountainous regions use mekayana to mount lightning raids against the colonial powers? Did the British steal the secrets of science and technology from the very vedas themselves, said to hold all knowledge?


I fucking love this supplement.

After history, comes religion, and while nowhere near a scholarly paper, Mekayana does give enough to stimulate the imagination, and its take on Indian religion is much better than whatever you saw in the Temple of Doom. There's also a short list of Hindi words and phrases that might come in handy, along with a random name generator.

Next time: We get SRS (but not too serious): Bollywood SRS's!