Novas are people too

Sorry this took so long to get started, I was busy with other things over the last week.

Some preliminary info first: Set in the far-flung future of 2008, Aberrant is the second canonical role play in the Aeon series from White Wolf Publishing. The core rulebook was published in 1999, and is a sort of deconstruction of the superhero genre of comic books and stories, especially the "dark" or "realistic" stories like Alan Moore's Watchmen, as opposed to Golden/Silver Age comics. It's preceded in the canon by Adventure!, which is a take on pulp action stories of the early twentieth century (think Doc Savage), and followed by Trinity, which is a take on Sci-fi/Space Opera. These were, as was mentioned previously in the thread, published in reverse order, with Trinity appearing in 1997 and Adventure! in 2001. Its metaplot and backstory can get pretty insane at times, but it's not terribly bad at envisioning a world where superheroes exist.

I haven't looked at the books in a while, since when I was part of a group the books we used belonged to a friend, so I don't remember all the specifics of the system. I do remember it being horribly broken at times and requiring houserules to function. I'm sure the problems will become pretty apparent as I go through the pdf's I found. 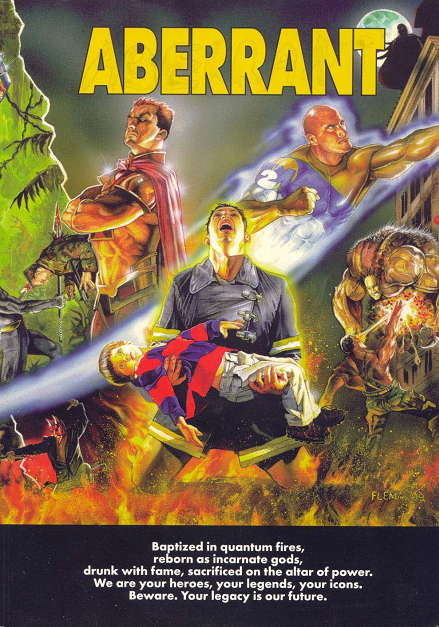 First things first, I forgot what a fucking nightmare these books were for layout and structure. The first section of the book is called "Setting", and is literally nearly a hundred pages of fluff for the setting, presented like the text interludes from Watchmen. You have TV interview transcripts, news reports, book exerts, a timeline of the period between "N-day" and 2008, and various other documents. Supposed to flesh in the world, I guess. These are presented without a table of contents. It just barrels directly into this stuff without warning. I'm not going to go through it all, since it' s really not all that important to the game. But I do have to point out a few gems on the Timeline: 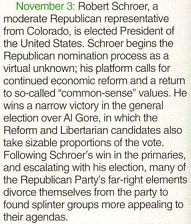 Even in fantasy land, Al Gore can't catch a break

If anyone asks what it would take for libertarians to take control of the US, the answer is "Superheroes"

Now we get to the actual rules:

The "Rules" section of the book starts out with your standard boilerplate description of what an "RPG" is, but it goes about it in a really pretentious way. Included at the very beginning is a paragraph labelled "Storytelling", which links RPG up to the continual evolution of the practice of storytelling through human history. Otherwise the descriptions are pretty standard, except the GM in this game is referred to as "The Storyteller". Players are of course expected to create Nova characters.

The World of Aberrant
Basic gist is that it's been 10 years since novas appeared. In that time, a shadowy organization called the Aeon Society set up a group called Project Utopia, which has grown to incredible power and prominence, due to its use of \novas to help humanity. Recently, one of the super-team spokespeople for Project Utopia, Jenny "Slider" Landers, was murdered, and suspicion for it has been pointed squarely at her former teammate, André Corbin. However, after Corbin fled, he joined with a group of rogue novas, called the "Aberrants", who claim to have evidence implicating Utopia in Slider's death. Nothing is certain, but these events have polarized novas worldwide on whether or not Utopia is really benevolent. It also includes a small section called "The Future" linking Aberrant to White Wolf's "Trinity" role-play.

Also included, just in case, are rules for LARPing Aberrant. These are just the standard advice to to stab your friends with real weapons, not to harass people not part of the game, and knowing when to stop.

Glossary
Next is a glossary of terms used in Abberant. 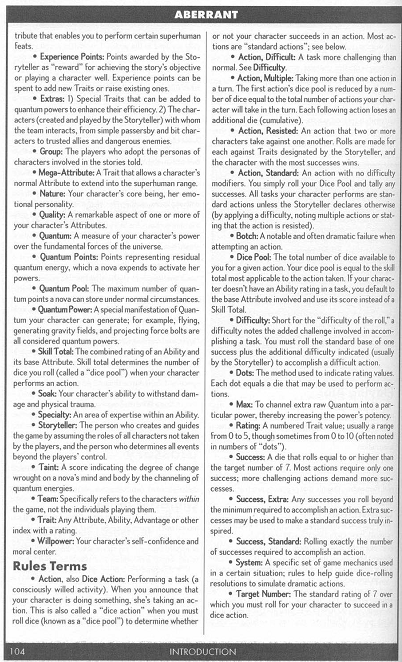 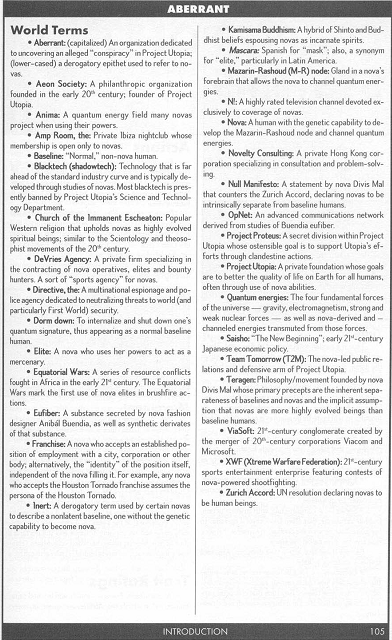 Next Up: Chapter One: System

I've been busy over the last little while, so I didn't get time to finish this as soon as I'd hoped. Hopefully Chapter 2 will be faster.

The first actual chapter dealing with how to play the game starts on page 106.

We begin with The Golden Rule , which is that if you don't like something about how Aberrant works, change it. As Aberrant is very much a narrative driven system, GM's are encouraged to tweak and ignore anything that makes telling their story harder.

Next, we are given description of how Time passes in Aberrant. The four divisions of time are as follows:

Turn : Smallest unit of time in game. Equal to the time it takes a character to perform 1 action. Turns are roughly equal to 3 seconds on average. However, actions that cannot be reasonably completed in this time happen over a longer turn of up to three minutes.

Scene : A discreet period of action in one location during the story. Scenes take as long as it is required for the action to resolve. Power use is tied to scenes in many cases, with successive uses of the same power becoming harder and harder until the scene ends and a new one begins.

Episode : Roughly equal to one gaming session, made up of scenes and downtime (the periods between scenes when characters are not actively in the story)

Series : A complete narrative arc, usually completed over several episodes. Experience is usually awarded at the end of a series.

Downtime - The period between scenes when characters rest, heal and deal with the mundane shit in their lives

Movement : Character either move 5 meters while walking move Dex+12 while running, or move (3*Dex)+20 while sprinting. Special traits like Mega-Dexterity, Hypermovement of Flight can increase this by a lot though. This actually ends up causing problems in the system, since out of battle powers are often described as much more powerful than their in battle uses imply.

Characters who use up all there movement can take no other actions that turn, in fact, using up more than half your movement requires the GM to rule on whether you should be able to do anything else.

Traits : Here we get to the meat of the Aberrant system. Your character basically has 3 different kinds of traits: Attributes (like D&D Statistics), Abilities (like Skills, but covering a few other things as well) and Quantum Powers (superpowers). You rank up each of these by putting "dots" into them, from one to five, using an experience buy system.

Rolling Dice and Dice Pools : Basic explanation of a dice pool system, pointing out each Ability and Quantum Power is associated with a specific attribute that adds to it.

Personality Traits : There are three special traits characters have, Willpower, Taint and Quantum . These are special in that they don't upgrade a long the standard 1 to 5 dot system, and aren't tied to attributes. More on them later

Success and Failure : This deals with how dice pool success and failure works. It also explains how to read multiple successes in situations where it's not just a direct numeric exercise. You have 5 degrees of success from Standard to Phenomenal, which can provide additional benefits or mean that you pull of an action in a really cool way.

Complications : This is just a few extra rules concerning dice pool mechanics. Botches occur when you role a 1 and no other successes, and mean you seriously fucked up. You can choose to take an Automatic Success of an action if your dice pool for attempting it is 7 or more. You can also spend 1 Willpower to get a free success, once per turn. Willpower however is incredibly hard to earn, so it's usually better to save these for desperate situations. Difficult Actions require the rolling of extra successes beyond 1 to achieve.

Extended Actions can take multiple turns to complete. You can keep rolling and racking up successes, but botches subtract from the total. The GM is also allowed to tell you that you fail if it takes too long, or you roll too many botches. 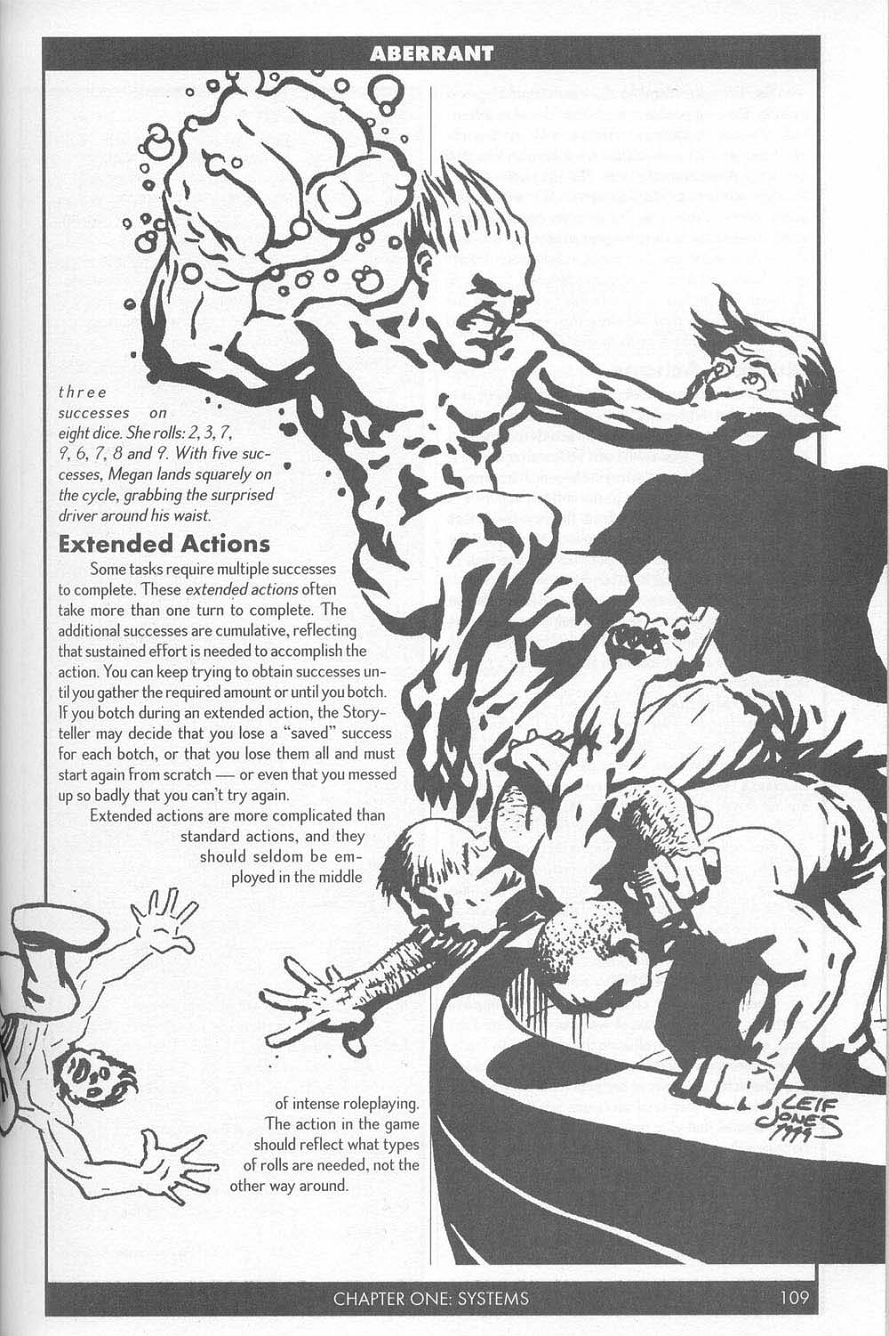 Look at his eyes. He knows what's coming


Multiple Action rules are a little weird. You can perform multiple actions in a turn but only by subtracting dice equal to the number of actions you are taking + n, where n is the number of actions you have taken. So, if my character wanted to do 3 things in one turn, that'd be -3 to the first action, -4 to the second, and -5 to the third. When your dice pool would be 0, you can no longer do that action.

Resisted Actions against other characters involve a role of to see who gets the most successes. Their success subtract from yours, lessening the degree of success and possibly causing failure.

Teamwork is allowed at GM's discretion, pooling success totals together.

Second Chances to take an action are allowed, but increase the difficulty to represent the "frustration with failure' your character is undoubtedly experiencing.

Next Up: Character Creation