Someone should really cover more of this D&D thing. It's so obscure it's hardly been mentioned in this thread!

At long last. The very last word in tabletop roleplay gaming! One core rulebook to rule them all! Some dude gets his face hacked off! A battle royale of Gandalf vs. Danzaiver vs. a dragon of some variety and also there's a panther there for some reason maybe that's what they're fighting over I really have no idea but it's so awesome I don't care!! IN SPACE!!!

But first, a disclaimer: I'm a roleplayer. I play roles. It's what I do. But when it comes to crunch, I suck. Hard. Furthermore, I haven't really gone through much of this book yet (pretty much knew it was going to wind up here the instant I saw that cover), so for all I know, this system might actually be good. I doubt it, but it's possible. It's certainly "obscure", in any event, and the art only gets "better", so away-ay-y we go-o-o!

Dice & Glory is the brainchild of one Robert Neri, Jr., who, according to his Facebook profile, is a heavyset 50- or 60-something California native who enjoys blues/folk music, classic American sports, and trout fishing. Wow. Talk about breaking the stereotype... oh, wait. Sorry, I screwed that up. Lemme try this again.

Dice & Glory is the brainchild of one Robert A. Neri, Jr., who, according to his Facebook profile, is a California native in his late 30s-early 40s who enjoys goth metal, the horror genre in general, Stargate SG-1 , Inu-Yasha , and Rifts . Body type is unknown because his profile image is a drawing of a skull with a starburst-patterned wizard hat on its head and a wand clenched in its teeth. Phew! Had me worried there for a second.

Anyway, this guy did everything: writing, editing, layout, even most of the art. He didn't do the cover, though, that was his younger brother/cousin/son, Joseph A. Neri, who I'm guessing isn't allowed to have his own Facebook page at least until after he's graduated from the 6th grade. All told, there are 18 credited positions, but only nine names including the Neri clan, who occupy a total of five spots between them. Gotta admit, I'm a sucker for this kind of dinner-table, "true believer" creation atmosphere. Probably the only person alive other than Tony Cardoza who'd buy Coleman Francis a drink without even a whiff of irony. That doesn't mean I don't still laugh out loud when watching The Skydivers , even without the Shadowrama, but I can respect it, if that makes any sense.

But I digress. The Table of Contents, which dutifully but unremarkably tables the contents, is preceded by this full-page headscratcher:

Image rotated for your convenience, but if seeing it right-side-up actually helps you figure out what the fuck is going on in it, well, God love ya, man, because I am so very lost. 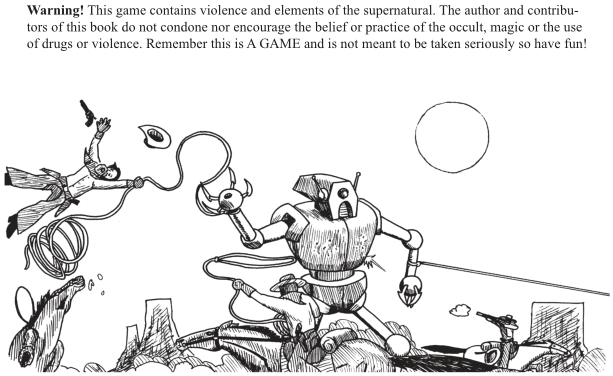 This rejected Harrison Ford movie poster design perfectly complements what is quite possibly the least necessary disclaimer I think I've ever seen. Just look at that and try to imagine anyone, anyone at all , taking anything out of this book seriously.

Anyway, the Introduction is a single page whose only notable feature is its absolute banality, so... I'm not sure why I'm mentioning it at all.

NEXT: the ever-popular Character Creation!

(In the interest of full disclosure, I should point out that the copy I'm working from is a first edition. Later, Robert hired an actual factual bona fide washed-up pulp comic artist by the name of Larry Nadolsky as head artist for the project. I haven't seen the full results myself, but one can see his replacement cover on DriveThruRPG, or find his website with minimal effort, and while I wouldn't call it "good", it's definitely a step up from the Trapper-Keeper-doodles-during-third-period-Social-Studies stuff I'm looking at here. So, at least there's that.)