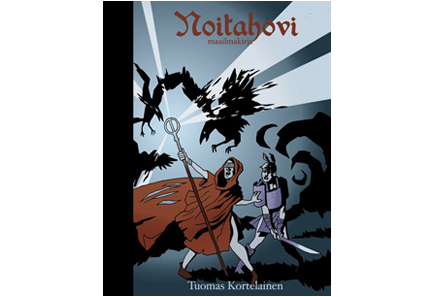 (The cover of the setting book.)

For the record, I'll cover the setting first since much of the rules would make no sense if the concepts and terms weren't explained before.

Incidentally, the lady with the skulls and serpents in the cover of the first book? That's an experienced player character, a witch with her court (everything else in the picture).

We'll star with the setting of the game, the lands it takes place in, The North (Pohjola). The setting borrows heavily from Finnish mythology and partially from actual history. One important piece of the setting is the woods and what they mean to the peoples of The North. For most normal people the woods are a scary place, full of things that will scare you, curse you and eat you. You don't go into the woods without good reason and never after darkness falls, if you can help it. There are things in the night and most sane people do not want' to meet them.

That being said, I'll get on with the book. I include the original Finnish terms, as used in the book, in captions.

Chapter One: The North in general terms
-The North is a vast, remote and hostile place. It's people love it, but few others do. It's most fertile, southern, parts are ruled by the horse-riding warriors of the east, the Natari (a mixtures of the Mongols and Russians). The conquered much of the North two generations ago and rule their vast estates from Dabarath, capitol of the North.

In the northern, wild and untamed land live the various Pagans (Pakanat), who defy the faith brought by the foreigners. The mightiest of the pagans are the Northeners (Pohjalaiset) , who keep up an endless guerrilla war against the Natari and place their faith, like their mothers before them, in the grim ladies of the Wildfolk (Villiväki), offering them sacrifices in return for powers(the sort of power that let you rule snakes, bears, foxes, ravens, trolls and small cannibal babies). The witches are the rulers of the Northeners.

The the utmost, barren north is the land of the people known as the People of the Huts (Kotakansa), a reindeer herding, nomadic folk who rely on spirits and seitas to survive in the hostile lands around them. (They are a bit like the native Saami people of Finland).

The third, smallest heathen group are the Trolls , beings almost, but not quite like men. They a primal, ancient people who, having been hounded by the cutting of their woods by the Children of The Light, are full of pent up rage, ready to burst. The live in caves, grottoes and other hard-to-find places, forming small tribes and occasionally co-existing with the Northeners.

At the start of the game the wide and mighty realm of the Natari is facing troubled times, as civil war looms in their distant capitol in the far east (outside the scope of this game), the Northeners are on the march and the Trolls, driven into corner by the worshippers of Kybele, are ready to rampage... 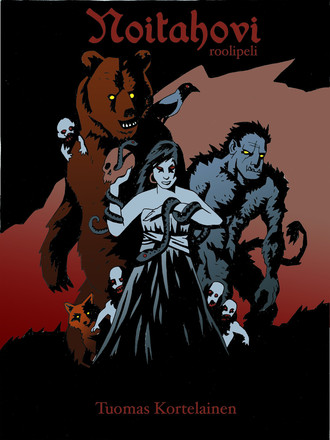 Sorry for the hiatus, I have not been able to post for a while, but I'll get back on track.

Moving on with the setting, there are two main ways of playing the game:

1.) A party of mostly Pagans, with at least on witch to lead them, struggling against the Natari and their lackeys
and also to increase their own power and to find a court of their own.

2.) A party mostly Children of the Light, most likely a minor (at first) Natari noble and her retainers, seeking
to (allegedly) bring their faith to the untamed north and to raise in the vast and hierarchic Natari society.


Next I'll cover the various player options in more detail.

First are the witches, the spiritual and temporal leaders of the Pagans, who appease, cajole, make deals with and sacrify to the
Wildfolk. The Wildfolk are split by their rulers, who each have various followers. A witch might gain a lesser member of the Wildfolk,
such as a hiisi (the red eyed cannibal babies), as a member of their court. These beings usually are fairly simple-minded, but the various
ruling ladies are more like forces of nature, unexplainable and terrifying. They are:

Baba Yaga
The lady of darkness, horrible to look at and always gnashing her iron teeth, she is a bloodthirsty, cruel and enigmatic being. She is known
as the ruler of life and death, and stories tell that she sees the past and the future. She lives in dark woods in her chicken-leg hut.
Baba Yaga favours courage, of the humble and selfless sort, persons who swear grim oaths (and fulfill them) and blood sacrifices, especially babies.
She dislikes light and those who spend much time in it. She hates laughter and frivolous frolicking. She has a surprising weak spot for genuine love.
She harbors monstrous vengeance against those who betray true love and those who would separate lovers from each other.

Zmeya
The Earth Serpent, sometime called the serpent, is the ruler of the woods. She is an ancient, enormous snake that hibernates beneath the earth in
wintertime but keeps a constant watch, in spirit, over her followers. Zmeya especially hunts those who disturb the peace of the woods and those who
harm snakes. She prefers quiet solitude, but sometimes attends worship ceremonies led by her children, the lamias. The might of her gaze can make her
victims forget everything, she lives in her serpent temple in the middle of verdant woods, attended by enormous, intelligent snakes not seen elsewhere
in the North. The temple is a labyrinth, which no interloper will leave. Zmeya stalks these uninvited quest, silent as death itself. She is a jealous,
greedy being and likes these qualities in her followers. She likes animal and human sacrifices, but prefers precious stones above all else. She dislikes
hasty action and conclusions, and, obviously, hates those who harm snakes. Some of her followers let snakes bite them on purpose.